100 of the most talented young Polish scientists awarded 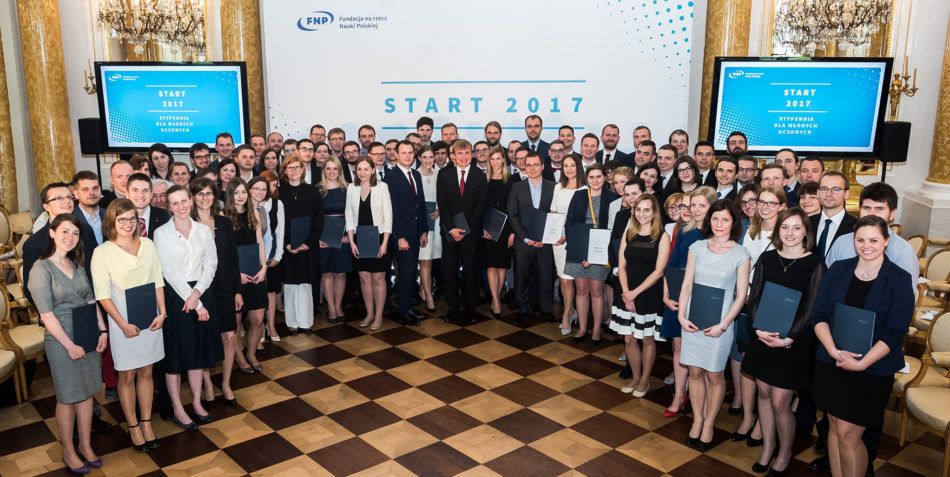 Nearly PLN 3 million was awarded to 100 of the most talented young Polish scientists, winners of the 25th START competition of the Foundation for Polish Science (FNP). They received their award certificates on Saturday, 27 May 2017, at a ceremony at the Royal Castle in Warsaw.

The special guests at the ceremony attended by over 350 people were Dr Jarosław Gowin, Minister of Science and Higher Education; Jerzy Kwieciński, Deputy Minister of Development; Prof. Artur Świergiel, a member of the National Development Council; Prof. Janusz Janeczek, chairman of the council of the National Science Centre; and Prof. Jacek Szmidt, chairman of the Conference of Rectors of Academic Schools in Poland. Apart from the winners and their invited guests, the ceremony was also attended by representatives of the scientific institutions where this year’s winners work, representatives of institutions cooperating with the Foundation, and other members of the scientific community.

The ceremony was launched by a speech by FNP president Prof. Maciej Żylicz, who stressed the essential role of mobility in the development of the scientific career of young researchers. He also mentioned that in planning their career paths, researchers should consider working in private firms as well—an area in which assistance is available under programmes of the Foundation for Polish Science. “We must build strong research teams in firms,” he added. “Otherwise there will always be barriers in our dialogue between the economy and science.”

After Prof. Żylicz’s speech, Prof. Artur Świergiel, a member of the National Development Council, representing the President of Poland, read a letter to the participants in the ceremony from President Andrzej Duda. Letters to the winners from Speaker of the Sejm Marek Kuchciński, Speaker of the Senate Stanisław Karczewski, and Deputy Minister of Development Jerzy Kwieciński were also presented.

Then the ceremony of handing out the award citations began. The first certificates were delivered by FNP President Prof. Maciej Żylicz and FNP Council Chairman Prof. Leon Gradoń to the distinguished winners whose research accomplishments were most highly rated by the competition reviewers: Michał Jachura from the Faculty of Physics at the University of Warsaw, who despite his young age (27) has already made outstanding achievements in the field of quantum optics and quantum technology; Dr Mateusz Konczal from the Faculty of Biology at Adam Mickiewicz University in Poznań, who has made distinguished achievements on fundamental issues of biology important for understanding the molecular bases of adaptations; and Dr Joanna Kułaga-Przymus from the Faculty of Mathematics and Computer Science at Nicolaus Copernicus University in Toruń, recognized as one of the finest of the young generation of Polish mathematicians (award accepted by her mother). The distinguished winners receive stipends of PLN 36,000 each.

The Prof. Barbara Skarga Honorary Fellowship is also awarded as part of the START programme, for research boldly crossing the boundaries between various fields of inquiry and opening up new research perspectives. This year’s winner was Dr Hanna Wojewódka from the Faculty of Mathematics, Physics and Chemistry at the University of Silesia in Katowice. She will receive an increased stipend of PLN 36,000.

This year for the second time a special prize was given under the Prof. Adam Sobiczewski Fund, established in 2015 to provide additional funding for the most highly rated START laureates in the fields of theoretical physics, mathematics and astronomy. The winner this year was Paweł Swaczyna, who has made great achievements in imaging of the heliosphere through satellite study of neutral gas streams. Swaczyna made a major individual contribution to the development of what is currently the most precise system for analysis of inert gases in and around the heliosphere.

START stipends have been awarded by the Foundation for Polish Science since 1993. Through 2017 FNP has awarded 3,436 START stipends totalling PLN 75,500,000. This year’s winners were selected from a field of 1,152 candidates. The regular stipend this year is PLN 28,000.