Research by scientists at IIMCB’s Protein Metabolism Laboratory, under the leadership of FNP Laureate – a leading topic in the latest EMBO Journal 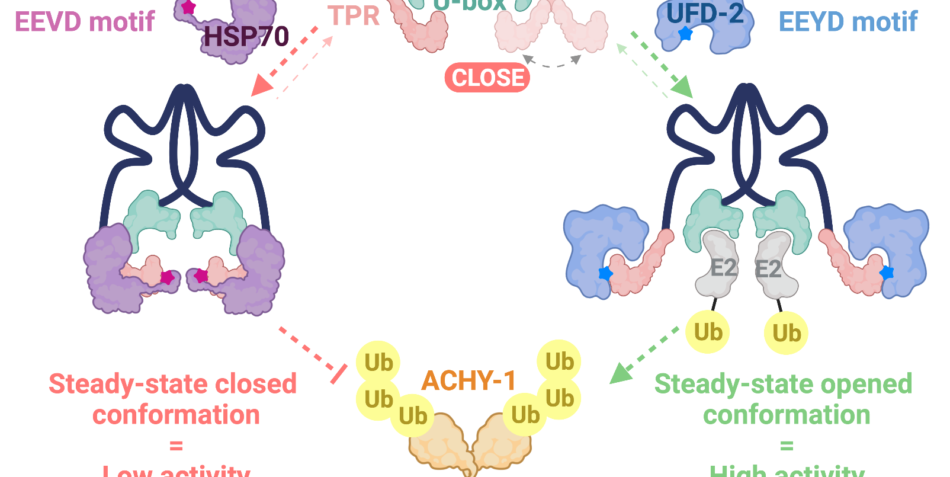 Scientists from the Laboratory of Protein Metabolism at the IIMCB in Warsaw, led by Wojciech Pokrzywa, Ph.D., D.Sc., winner of the FIRST TEAM programme of the Foundation for Polish Science – a grant financed under the Smart Growth Operational Programme, have recently published an article entitled „A heterotypic assembly mechanism regulates CHIP E3 ligase activity”, which will also be featured on the cover of the August issue of the prestigious EMBO Journal.

This work elucidates the mechanism of regulation of an important enzyme involved in the principal cellular proteolytic network – the ubiquitin-proteasome system. This pathway is responsible for degrading damaged or unwanted proteins and plays a crucial role in cellular function. Researchers from the Pokrzywa’s group focused on the CHIP ubiquitin ligase enzyme – a quality control factor responsible for the regulation and degradation of multiple protein targets, including those implicated in the pathogenesis of neurodegenerative diseases such as Parkinson’s and Alzheimer’s disease or cancer. Therefore, understanding the molecular mechanisms underlying CHIP substrate selectivity and its functioning within the ubiquitin-proteasome system are vital from the perspective of processes responsible for maintaining cellular homeostasis and, consequently, how they may get dysregulated, leading to disease.

In this article, Wojciech Pokrzywa and his group used the Caenorhabditis elegans nematode as a model organism to study CHN-1 – an analog of the human CHIP enzyme. It was known that CHN‐1 could cooperate with UFD‐2, another ubiquitin ligase enzyme, to accelerate the ubiquitylation of CHN‐1 substrates. In this process, ubiquitin protein is attached to the target protein, acting as its cellular degradation signal. However, the basis for the high processivity of the CHN-1/UFD-2 pair has remained obscure. The article shows that UFD‐2 binding promotes the cooperation between CHN‐1 and ubiquitin‐conjugating enzymes by stabilizing CHN‐1 and consequently increases its activity. However, another protein – HSP70/HSP‐1 chaperone outcompetes UFD‐2 for CHN‐1 binding, thereby promoting CHN‐1 inactivation. These data provide insights into the potential regulatory process enabling for switching on/off CHN-1 activity to maintain cellular homeostasis. Notably, the researchers have also identified a set of new potential substrates of CHN-1, including S‐adenosylhomocysteinase (AHCY‐1), a key enzyme involved in methylation – a process responsible for determination if particular DNA instructions would be processed, regulating proteins and lipids, and controlling signals in the nervous system.

The link to the publication: here