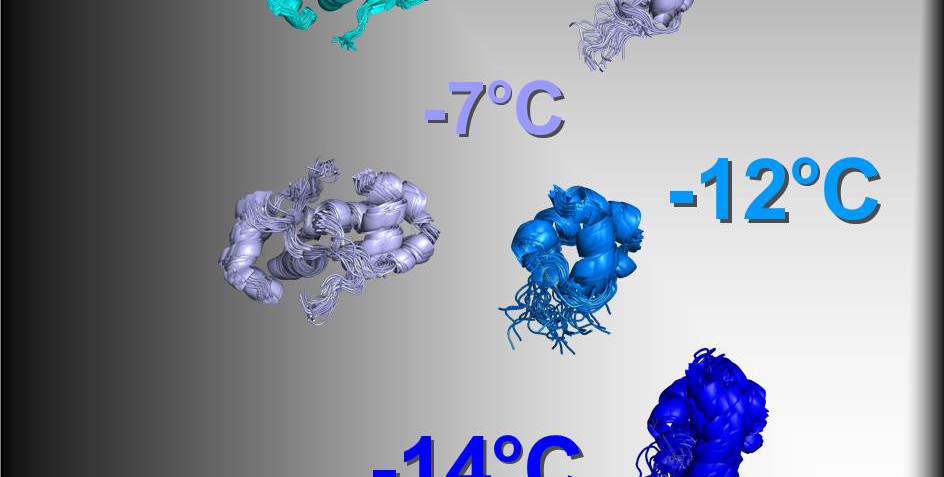 Dr Mariusz Jaremko and Dr Łukasz Jaremko, beneficiaries of the Foundation for Polish Science’s START and VENTURES programmes, have collaborated with German scholars to use an innovative research method to observe for the first time the process of breakdown of protein. Among the uses of the recognition of this mechanism could be help in beating Alzheimer’s disease. The results of the research were published in the prestigious journal Nature Chemical Biology.

Proteins occur in all living organisms and viruses. In order to function properly, single chains of proteins roll up and combine, creating complex, three-dimensional structures which, in very simple terms, resemble tangled paper chain decorations. When the process of “rolling” of proteins occurs correctly, the proteins acquire biological functions and fulfil their role well. However, sometimes particles of the protein break – they unfold or fold excessively – thus losing the correct shape. The proteins then no longer work well, and in some cases create insoluble, toxic lumps which damage cells and can lead to serious illnesses such as Alzheimer’s and Parkinson’s disease.

Therefore, one of the most important questions in biological sciences and medicine is: “how do proteins gain or lose their three-dimensional structure?”

Scientists have been looking for the answer for a long time, testing various methods (using warmth and pressure) to try to make it possible to observe the process of destruction of protein. However, none of these has been successful – either because the disintegration process was too fast and could not be captured, or because the intermediate forms that occurred during the process of disintegration of the protein were too short-lived.

The puzzle has now been solved by researchers from the Max Planck Institute for Biophysical Chemistry (MPIbpc) and the German Centre for Neurodegenerative Diseases (DZNE) in Göttingen, working with scientists from the Polish Academy of Sciences in Warsaw and the University of Warsaw. The employed an innovative method based on using low temperatures which allowed them for the first time to “film” the complex process of folding of protein. The scientists revealed – at atomic resolution – how protein progressively “loses its shape”. Selected as the object of the study was CylR2, key to the production of toxins in Enterococcus faecalis, a pathogen often occurring in hospitals, where it especially infects patients with weak immune systems. But this was not the only reason why this protein interested the researchers: “Some time ago scientists working at MPIbpc with Stefan Becker – the co-author of the latest discovery – managed to explain its structure, which demonstrates that its three-dimensional shape makes CylR2 an especially promising object of scientific research. CylR2 is a relatively small protein consisting of two identical sub-units. This gave us a great chance of revealing the various stages of the process of its unfolding in the test sample,” say chemists Mariusz and Łukasz Jaremko.

Stefan Becker’s group took the first step: preparation of a sufficient amount of protein in the laboratory. Next, the two chemists cooled the protein successively from 25°C to -16°C and tested its intermediate forms using the spectroscopy method. They achieved what they set out to achieve: their “film clip” shows in atomic resolution how a protein gradually unfolds. The structural biologist Markus Zweckstetter from the German Centre for Neurodegenerative Diseases, one of those responsible for the discovery, describes exactly what happens in this process” “We clearly see how the CylR2 protein ultimately divides into its two sub-units. The single sub-unit is initially relatively stable. On further cooling, the protein continues to unfold, and at a temperature of -16°C it is extremely unstable and dynamic. This unstable form of protein is the beginning of the folding, and can also ‘trigger’ incorrect folding.”

The latest findings by the Polish and German scientists could help provide a more profound insight into the way in which proteins assume their spatial structure and why the indirect forms of some proteins fold incorrectly in the case of illness.

Film showing the “breakdown” of protein