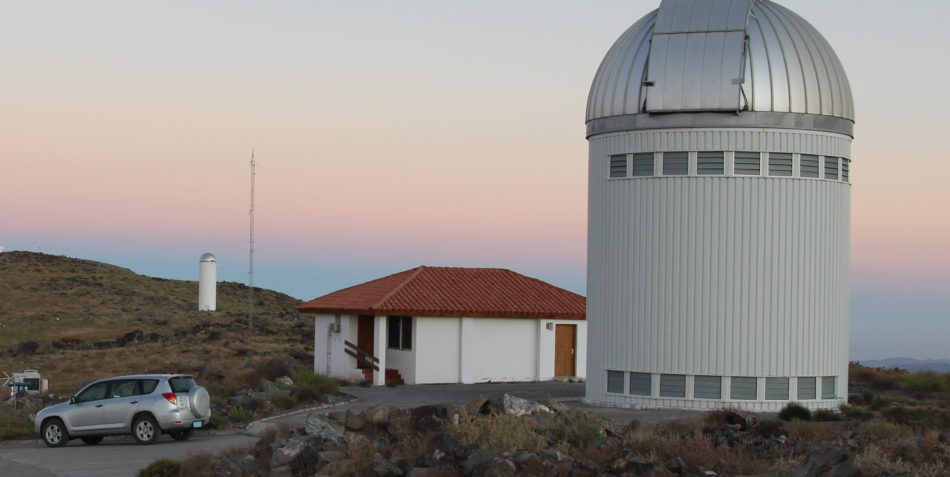 Thanks to regular brightness measurements of over a billion stars of our Galaxy, astronomers working at The Optical Gravitational Lensing Experiment (OGLE) at Warsaw University Astronomical Observatory, Poland, have discovered an unknown class of pulsating variable stars. Follow-up observations have shown that these objects are much hotter than our Sun. A very unusual property of the objects is that they significantly change their physical parameters over a period of about half an hour. Such rapid variations have never been observed in any known type of pulsating stars. Theoretical models confirm the observed behaviour, but the origin of the new stars remains a mystery. The discovery of the new class of variable stars has been published in the prestigious Nature Astronomy journal.

Pulsating stars are very important objects in modern astrophysics. They are used to measure distances in the Universe and they allow studying the evolution of stars and their interiors.

It seemed that we knew almost all about pulsating stars, that we knew all their types, but not. We have found something completely new and very unusual – says Dr. Paweł Pietrukowicz, the principal investigator and the first author of the published work.

Unlike our Sun, many stars are unstable-they pulsate. The entire star expands and shrinks by a few percent. Both the size and surface temperature change, which is observed as regular brightness variations. Large-amplitude variations are seen in red giants. These are relatively cool stars with extended envelopes. Pulsating red giants such as RR Lyrae type stars and even brighter delta Cephei type stars (the so called classical Cepheids) are common in the Universe. Surface temperature of these stars is similar or slightly higher then the temperature of the Sun (~5800 K). The pulsation periods of giants cover a wide range from a few hours to hundreds of days.

Hot blue stars also pulsate. Its surface temperature is of several tens of thousands degrees. Among hot pulsating stars are beta Cephei type stars and subdwarfs. The former objects are even one thousand times brighter than the latter, owing to their much larger sizes. The pulsation periods of hot stars are short, they range from seconds to hours. The amplitudes are small, since the stars are compact and have less inflated envelopes. By monitoring a billion stars by the OGLE survey, the realm of variable objects have been extended for a new, unusual class of stars.

The OGLE survey is a flagship Polish observational project celebrating its 25 years. Each clear night, practically non-stop since 1992, we monitor the variability of hundreds of millions of Milky Way stars from Las Campanas Observatory, located on the Chilean Atacama Desert. – says Prof. Andrzej Udalski, the head and manager of the project.

Among discovered objects are extrasolar planets, unique events of gravitational microlensing, outbursting novae and supernovae, and many other objects that vary, including periodic objects like pulsating stars. Astronomers from OGLE have found and classified about a million genuine periodic variables, half of which are various types of pulsating stars. This is the largest collection of variable objects in the whole history of astronomy.

The discovery of the new class of pulsating stars has been a great adventure that started in 2013. That year, we surprisingly noted the first such mysterious object – mentions Dr. Pietrukowicz.

What surprised the astronomers was the fact that the first obj ect and another stars found later vary in brightness by several tens percent in about half an hour. Such large changes in such a short timescale had never been observed before. To find the cause of this variability, follow-up observations have been taken with the largest telescopes in the world. The observations showed that the objects have the temperature of 30,000 degrees and the observed changes are due to pulsations. This allowed the investigators to build a model of the star. It turned out that the new objects have a giant-like structure with 96% of the total mass concentrated in a core having merely 20% of the size of the star. The remaining matter forms a light inflated envelope that pulsate rapidly with a large amplitude. Based on the observed properties of the stars, the name of the new class has been proposed: BLAPs, as for Blue Large-Amplitude Pulsators. 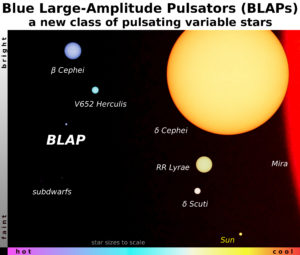 The theory describes the structure of BLAPs, but it fails to explain their origin. These stars must have lost a significant fraction of their mass at some point to became as hot as we observe them now.

Certainly, it is impossible to reach such configuration in evolution of a single star. Perhaps, the star passed by closely the supermassive black hole residing in the Galactic Centre. As the result of such an encounter, the star would loose its outer layers – suggests Prof. Wojciech Dziembowski, a theoretician and the second author of the article in Nature Astronomy.

Such a possibility is rather unlikely. A more realistic explanation is that BLAPs are the result of a merger of two low-mass stars. Future observations should help solving this mystery – adds Dr. Paweł Pietrukowicz.

The article announcing the discovery of the new class of pulsating variable stars, BLAPs, has been published in the monthly journal Nature Astronomy: