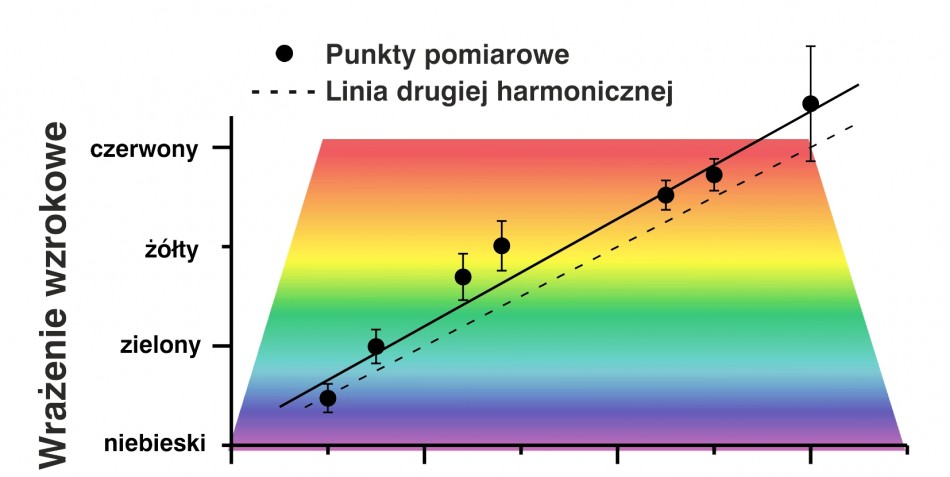 The latest issue of PNAS (Proceedings of the National Academy of Sciences) weekly includes a paper presenting the results of interdisciplinary research on the vision mechanisms of the human eye, obtained from international collaboration involving Polish researchers (the group of Maciej Wojtkowski of Nicolaus Copernicus University (NCU) and Krzysztof Palczewski of Case Western Reserve University).

The authors of the paper attempted to explain the phenomenon observed in Prof. Wojtkowski’s laboratory, whereby there is a visual impression of a visible beam in the human eye during scanning of the retina with a laser beam with short impulses of 900-1150 nm. The colour perceived by a person whose retina is scanned corresponds to roughly half the optical wavelength of introduced beam. The results of the research featured in the paper lead to the conclusion that this phenomenon is caused by two-photon absorption of infrared light taking place in photoreceptors of the human eye. This results in the same changes to the architecture of the proteins of these photoreceptors (conformational, and thus not connected to changes in chemical bonds) taking place as when a single photon of a two times shorter wave is absorbed. Our brain and eye therefore react as if the retina were exposed to a visible beam.

The paper is a compilation of the results obtained by four research groups spread around the world: Katarzyna Komar and Patryk Stremplewski from Prof. Wojtkowski’s group at NCU described the phenomenon observed in the publication, delivering the results of psychophysical research conducted on healthy volunteers. The team led by Prof. Vladimir Kefalov of Washington University in St Louis measured the electric responses obtained in vitro from mouse retinas exposed to an impulse of the infrared laser beam. The laboratory of Prof. Krzysztof Palczewski at Case Western University in Ohio delivered information at molecular level – on the conformational changes taking place in rhodopsin (a protein found inter alia in retina cells) when exposed to infrared laser light. The team led by Prof. Michele Cascella from the University of Oslo, meanwhile, carried out simulations of a cross-section of active rhodopsin on two-photon absorption using molecular dynamics.

The collaboration between professors Wojtkowski and Palczewski, which has begun with such an interesting publication, is only just developing. Prof. Wojtkowski’s group focuses on biomedical imaging, in particular its application to the human eye in vivo. Best known is their pioneering work on Fourier-domain Optical Coherence tomography (OCT) for studying the structure of the retina, as well as implementation for general use in ophthalmological practices of OCT scanners for checking the retina, which permits non-invasive and noncontact examination of the inside of the eye.

Prof. Palczewski’s team, meanwhile, studies the biochemical processes involved in the vision process as well searching for new medication for retinal disorders caused by problems with these processes. The complementary character of the two groups’ research areas opens the door to a number of interesting and innovative potential joint research projects in future. At present, these joint efforts are concentrated on in vivo imaging of the human eye based on two-photon fluorescence. Professors Wojtkowski and Palczewski met in 2012 at an FNP Prize Ceremony at which they were both receiving awards.