Research meteorologists from Poland (Institute of Geophysics Polish Academy of Sciences, Collegium Civitas), USA (Naval Research Laboratory, Scripps Institution of Oceanography) and Indonesia (Agency for Meteorology, Climatology and Geophysics of the Republic of Indonesia, Andalas University) identified key predictors of floods on Sumatra. The research is part of the Years of the Maritime Continent and  the Equatorial Line Observation (ELO) project.

When it comes to paradise islands, people often think of Indonesia. Surprisingly for many, one of the largest of Indonesian islands – Sumatra – is exposed to extremely high average precipitation, with frequent heavy showers which develop over steep topography. As a result, the island often suffers from precipitation- driven natural hazards, such as floods and landslides, which account for more than 50% of all natural disasters. Such dangerous events inflict great socio-economic loss and damage.

Where is the flood?

Although the question may seem naïve, complex terrain, lack of a dense observational network and inconsistent data processing make reliable flood identification a non-trivial task. This study utilizes crowd-sourced data from social media and traditional newspapers to supplement governmental reports on flood monitoring and detection. Flood data from these sources were independently analyzed against meteorological (precipitation, wind patterns) data to identify key physical processes responsible for their occurrence. Dr Baranowski, a principal investigator of this research, said that “the Maritime Continent is arguably one of the most important regions in the global weather and climate system. However, there are large gaps in our knowledge about interactions of the atmosphere, ocean and land surfaces. Our work should help in understanding weather-related natural disasters in that region.” Dr Piotr Flatau, principal investigator of the Equatorial Lines Observations projects supported by the US National Science Foundation stressed that this work was a result of collaboration between Indonesia, USA and Poland within the international Years of Maritime Continent program, whose objective was to improve understanding and predictions of local variability and global impacts of the weather-climate system of the Earth’s largest archipelago.

The study focuses on time scales from several days to several weeks and processes known to strongly modulate precipitation patterns on a large scale, such as monsoon, Madden-Julian Oscillations and tropical waves. The results highlight some importance of precipitation anomalies associated with monsoon and MJO (the major fluctuations in tropical weather on weekly to monthly timescales), in agreement with previous studies. However, scientists found a new major predictor of floods on Sumatra in the form of convectively coupled Kelvin waves, a type of tropical weather pattern associated with intense precipitation which propagates eastward along the equator. This type of phenomenon was not only solely responsible for nearly 30% of floods, but also contributed to over 65% of floods in conjunction with monsoon, MJO or both.

Can floods be better predicted?

A thorough understanding of the role of periodically-occurring tropical disturbances in triggering floods on Sumatra creates an opportunity for better prediction. During the investigated period (2014-2018), nearly 60% of floods on Sumatra were associated with Kelvin waves which existed and were recognizable in satellite data at least two days before a flood began. Extended range predictions are also possible, because improvements in convective parameterizations have led to more skillful forecasts of tropical waves. Such predictability should be exploited in order to mitigate some of the socioeconomic costs of floods.

In addition to Dariusz B. Baranowski, research team members included Maria K. Flatau and Jerome Schmidt of Naval Research Laboratory, Piotr J. Flatau of Scripps Institution of Oceanography, Dwikorita Karnawati, Director General of the Agency for Meteorology, Climatology and Geophysics of the Republic of Indonesia, Katarzyna Barabasz of Collegium Civitas, Michal Labuz, graduate student Beata Latos, researcher Jaka A. I. Paski and Marzuki of Andalas University. The finding is published in the May 19, 2020 issue of Nature Communications, where the list of all authors and their contributions to the study may be found.

This research was funded by National Science Foundation (USA), Foundation for Polish Science (Poland), Naval Research Laboratory (USA) and the Agency for Meteorology, Climatology and Geophysics of the Republic of Indonesia (Indonesia). 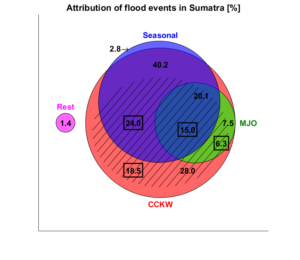