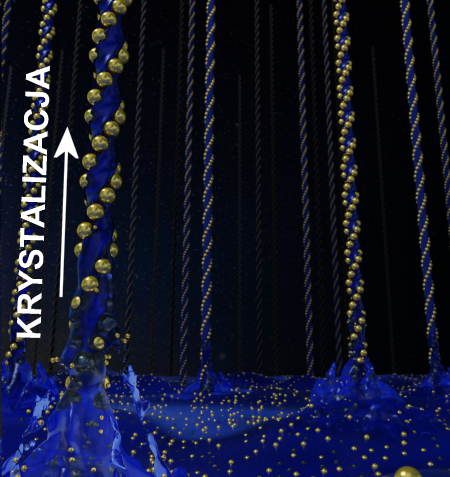 Dr hab. Wiktor Lewandowski and his team from the Faculty of Chemistry, University of Warsaw, together with an international team of specialists from Japan, Spain and the USA, have explored how to produce nanostructures using controlled crystallisation. Their experiments have provided insights into how nanostructures can be ordered/disorganised to produce materials with unique optical properties. As nanotechnology commonly employs crystallisation, these findings are crucial for the development of materials required for next-generation sensors. The results of these experiments, made possible with support from Foundation for Polish Science’s FIRST TEAM project, were published in two prestigious journals,  ACS Nano and JACS.

The first paper analyses in detail the movement of colloidal nanoparticles suspended in a liquid, using a technique known as Wet STEM. This method relies on environmental (meaning one that can be used to examine liquids), scanning electron microscope (ESEM) that supports in situ imaging, and its resolution is 100 times higher compared to optical microscopes. Using advanced equipment like this, the researchers from the CICnanoGUNE (San Sebastian, Spain) and Wielkopolskie Centrum Zaawansowanych Technologii (Poznań, Poland) centres were able to observe in situ how gold nanorods behave at nanoparticle level. “Gold nanomaterials with a forest-like structure, i.e. where all nanoparticles have elongated shape and “stand” next to one another like trees, are being the subject of intensive research because of their capacity for increasing the sensitivity of biological sensors. Until now, our knowledge about the production and stability of such systems has been limited, as we were only able to rely on averaged movements of thousands of nanoparticles. With our research, we were able to better understand the behaviour of individual nanoparticles and the factors that affect their destabilisation,” says Dr Lewandowski. This paper, published in the renowned Journal of American Chemical Society, was written in cooperation with Peter Kral and his team from the University of Illinois, Chicago, who specialise in modelling molecular systems.

The second paper, concerning helical gold nanoparticle systems with plasmonic chirality properties, created in partnership with teams led by Professor Luis Liz-Marzan from Spain and Professor Hiromi Okamoto from Japan, was published in the prestigious journal ACS Nano. In this study, the researchers used a recently developed method for controller nanoparticle crystallisation to “force” nanoparticles to create double helixes (structures similar to that of DNA), and demonstrated some unique optical properties of such systems. “We all know, or will soon be reminded by the coming winter, that freezing can produce some really beautiful structures, such as snowflakes. A similar freezing process, developed for the materials we have designed, can produce some equally beautiful and ordered nanomaterials with helical, or spiral, structures. Our study has shown that, apart from being beautiful, such materials can have some amazing optical properties associated with their chirality, e.g. being available in two, nearly identical, forms, which are like mirror images of one another. As a result of their chiral structure, nanoparticles show much stronger interaction with light compared to other commonly used, purely organic, materials. Our study responds to the pressing need, and demanding requirements, for advanced nanoparticle development methods. By making materials with chiral properties relatively easy to produce in a scalable fashion, we are contributing to the continued advancement of optical nanomaterials and metamaterials,” explains Dr Lewandowski.

Both articles were published on an open access basis under an agreement co-financed by the Ministry of Science and Higher Education (MNiSW) and made with the American Chemical Society by the University of Warsaw’s Interdisciplinary  Centre for Mathematical and Computer Modelling on behalf of a consortium of Polish academic institutions.

Dr hab. Wiktor Lewandowski graduated from the Faculties of Biology and Chemistry, University of Warsaw (UW), and did his PhD at the Faculty of Chemistry, UW (with honours). He has completed scientific internships programmes at the Massachusetts Institute of Technology in Boston, USA, the University of Maribor, Slovenia, and CICbiomaGUNE, Spain. Dr Lewandowski is laureate of START, INTER, and FIRST TEAM Programmes by the Foundation for Polish Science. He has also been awarded grants from NCN and MNiSW programmes. In 2012 and again in 2016, he won scholarships for outstanding achievement from the Minister of Science and Higher Education.