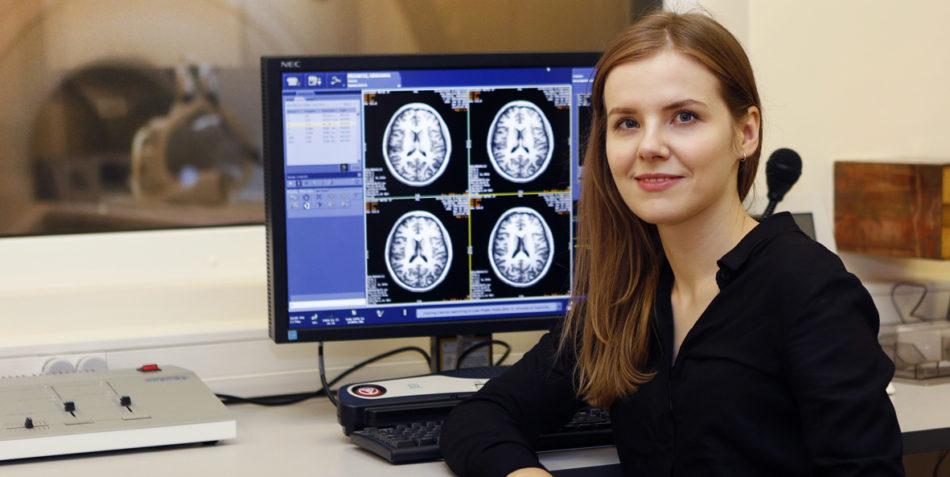 Dr. Karolina Finc from the Centre for Modern Interdisciplinary Technologies, Nicolaus Copernicus University in Toruń, and winner of the START program of the Foundation for Polish Science, in cooperation with researchers from the USA and Germany, checked what is happening in our brain when absorbing new messages of high difficulty. The knowledge acquired by the scientists may contribute to the development of new methods for measuring the dynamics of plastic changes in the brain and the development of new therapeutic methods. They published the results of their research in Nature Communications.

The human brain’s complexity is so intricate that we struggle to describe it with basic methods of neuroimaging data analysis. A new field of science – network neuroscience – explores the complex network of connections in the human brain using mathematical algorithms derived from graph theory.

It turns out that even when we do not perform any cognitive tasks, areas of the brain that perform similar functions work in a synchronized manner. Measuring the degree of this synchronization, we can reproduce a map of functional connections in the entire human brain: the “functional connectome.”

The functional connectome is constantly reorganizing: it can change after intensive learning or training – such as a sequence of complex movements – but also adjust in real-time so as to adapt its organization to the changing difficulty of the tasks we face every day.

The research goal of Karolina Finc and colleagues was to broaden our knowledge about how functional brain networks optimize their organization during cognitive tasks of increasing difficulty, how this reorganization pattern changes during cognitive training, and what factors can affect the nature of these changes.

“We tested 46 healthy volunteers with the fMRI scanner. Their brain activity was tested four times between periods of intensive working memory training. FMRI examinations happened before the training and then two, four, and six weeks into the training. We compared the results of the fMRI study of 23 people who trained with a memory task with the results of 23 people who trained a similar task at the lowest possible level of difficulty,” explains Finc.

The analyses revealed that the modularity of the human brain network gradually increased in people who trained their working memory. Moreover, experiments on the dynamics of network reorganization showed that – along with the training of working memory – the brain regions that belong to the “default mode network” gradually reduce their communication with regions of active networks during the task (task-positive network). Less communication between these networks is also related to the progress in completing the task that involves working memory.

The research helps to better understand how human brain networks adapt to the changing difficulties of cognitive tasks and during cognitive training. The results of this research can contribute to the growing knowledge about the dynamics of human brain’s functional network and about the impact of learning and automation on this network’s reorganization.

The research on the reorganization of functional networks was possible thanks to the support of the National Science Centre and the Foundation for Polish Science (FNP). The publication was created in international cooperation with scientists from the Complex Systestems Group (Danielle Bassett, Xiaosong He, David Lydon-Staley) from the Faculty of Bioengineering at the University of Pennsylvania (USA) and Simone Kühn from the Max Planck Institute for Human Development in Berlin (Germany). The co-authors of the article from the Nicolaus Copernicus University are mgr Kamil Bonna and Prof. Włodzisław Duch.

Karolina Finc is Assistant Professor at the Centre for Modern Interdisciplinary Technologies (CMIT), Nicolaus Copernicus University in Toruń. She currently runs the Computational Neuroimaging Team (http://compneuro.umk.pl/) and is a member of the Center of Excellence “Dynamics, mathematical analysis and artificial intelligence” (the neuroinformatics group headed by prof. Włodzisław Duch). Her scientific interests focus on the study of the human brain’s plasticity during learning processes and especially on the reorganization of the brain’s functional connectome. She eagerly engages in the development of open-source scientific software and promotes neuroimaging data analysis and open science as a supervisor of the Neuroimaging Scientific Circle operating at the CMIT.

Winner and beneficiary of competitions, scholarships, and grants for young researchers, Finc won the FNP’s 2018 START program, in which she additionally received Professor Barbara Skarga’s scholarship. The latter is awarded to outstanding young scientists whose research is distinguished by the bold crossing of boundaries between various fields of science, the opening of new research perspectives, and the creation of new values in science.