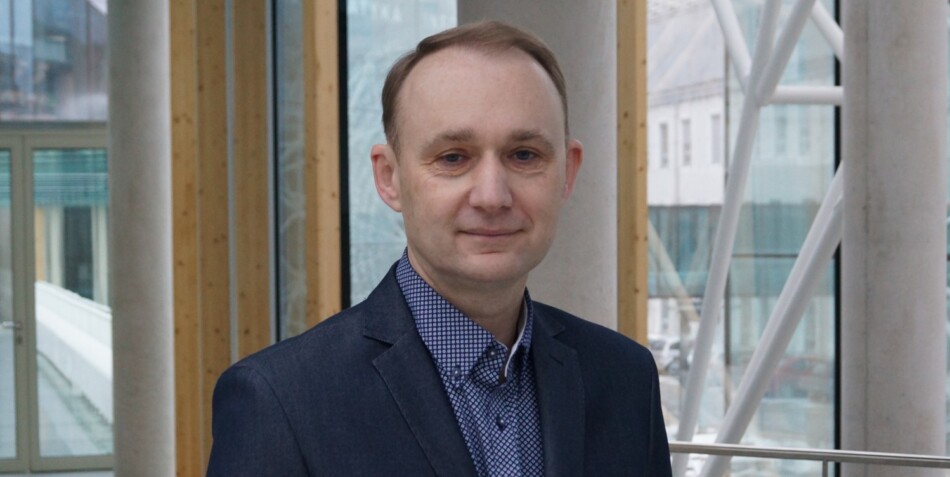 People are now producing huge amounts of digital data. A sudden increase in the amount of information to be processed, stored and transferred is quite a challenge for scientists working on new technologies associated with data processing and recording. The research team working under the supervision of dr hab. Andrzej Stupakiewicz from the Faculty of Physics of the University of Białystok, a laureate of the TEAM programme of the Foundation for Polish Science  managed to achieve a record-breaking speed and efficiency of data recording. Polish physicians, in cooperation with scientists from the Netherlands and Germany, discovered the mechanism of ultrafast magnetisation with the use of atomic vibrations, and the results of the work were published in the prestigious journal Nature Physics.

Data recording on magnetic media is currently the cheapest and most durable among various recording technologies used for this purpose. The nature of the phenomenon lies in magnetisation switching phenomena. “To put it plainly, a magnetic memory medium contains a multitude of coupled magnetic cells. Before recording, each of them has the same magnetisation direction. Reversing the magnetisation direction of the selected cell leads to the binary recording of information – from 0 to 1 and vice versa. In the currently available memories, the magnetisation state is changed with a magnetic field or electric current. However, these technologies are subject to physical limitations. First of all, the recording speed is limited – in the fastest RAM memories the recording time is several nanoseconds (a nanosecond is a billionth part of a second). Second of all, during recording on the medium, unnecessary heat is produced, which needs to be removed by using additional energy. It is estimated that contemporary IT centres for data storage and processing consume around 5% of the produced global electric energy,” said dr hab. Andrzej Stupakiewicz.

Therefore, scientists around the world are working on new methods and technologies that would not only increase the speed of information recording but also would be more energy-saving. Such a method was presented by the team of physicists from the University of Białystok, and currently it is being improved. As early as in 2017 Polish scientists published breakthrough results in Nature referring to the use of only ultrashort light impulses for photomagnetic non-thermal data recording, which is referred to as cold recording. Due to the use of light, the scientists were able to switch the directions of magnetisation and record data with unrivalled speed, even up to a thousand times faster than in the fastest of the currently available RAM memory. Furthermore, during recording and reading information the temperature of the medium increased only slightly, so no cooling was needed.

A revolutionary technology of the future

Recording was performed on an optically transparent layer of yttrium iron garnet with the addition of cobalt ions. It is a synthetic material which is easy to obtain and cheap to produce. “Currently we are conducting research on modifications of its parameters, so that it would be possible to record information even faster and more efficiently,”  explained dr hab. Stupakiewicz.

The continuation of the work was the discovery made as part of the TEAM grant and published in Nature Communication in 2019. In the publication, scientists from Białystok proved that the new method enabled not only more effective data recording, but also their sending through a fibre network, using impulse lasers operating in the telecommunications frequency band. Furthermore, physicists obtained another result demonstrating the ultrafast photomagnetic recording sequence involving deleting and re-recording information with only optical methods at a record-breaking frequency reaching up to 20 GHz.

Shaken, not stirred – a new recipe for magnetic recording

Currently the Białystok physicists in cooperation with researchers from the Netherlands and Germany published another breakthrough study, in which they presented an entirely different physical mechanism leading to ultrafast magnetisation switching, i.e. data recording. This time they used resonance atomic vibrations. “We demonstrated that light is not necessary for changing the magnetisation of garnet-structured layers. You can shape the atoms in an appropriate way and achieve the same result. For stimulating atomic vibrations, we used terahertz radiation from a free-electron laser as part of cooperation with the foreign partner of the TEAM project from Nijmegen in the Netherlands. For recording, we used impulses lasting less than one picosecond (a picosecond is one thousandth of one billionth of a second),” explained dr hab. Andrzej Stupakiewicz.

The first of the methods described by the researchers, i.e. photomagnetic magnetisation switching with light impulses, is more practical due to the rapid development of ultrafast laser technologies operating in the telecommunications frequency band Using terahertz radiation is more problematic due to limited access to sources generating such ultrashort impulses. “However, the other method is more universal – we have shown that with ultrafast stimulations of atom grid vibrations it is possible to change the magnetisation state of virtually any material. This allows controlling and changing various physical properties of these materials, e.g. optical, electrical and mechanical properties. This considerably expands our possibilities and opens up completely new ways for developing novel research concepts in basic sciences, such as chemistry and biology, and for practical applications, not only related to recording digital information,” emphasised dr hab. Andrzej Stupakiewicz.

Dr hab. Andrzej Stupakiewicz specialises in the physics of magnetism and in optics. After graduating from the Faculty of Physics of the Yanka Kupala State University of Grodno, he started work at the Department of Physics of Magnetism, the University of Białystok. He obtained the degrees of doktor (PhD) and doktor habilitowany (a post-doctoral degree) at the Institute of Physics of the Polish
Academy of Sciences in Warsaw. He has published his works in such journals as Nature, Nature Communication, Nano Letters, Physical Review Letters and Applied Physics Letters. Dr hab. Stupakiewicz has co-authored several patents granted by the Polish and the US Patent Office.

The TEAM programme is implemented by the Foundation for Polish Science with EU funds from the European Regional Development Fund under the Smart Growth Operational Programme, Axis IV: Increasing the research potential, Measure 4.4 Increasing the human potential in the R&D sector.

All hope is in science! Give 1% of your tax to young scientists. Our National Court Register number: 0000109744