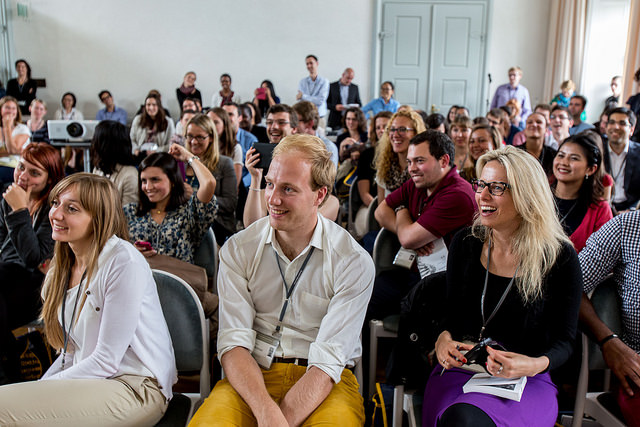 From 29 June to 4 July 2014, 600 talented young researchers gathered in Lindau on Lake Constance to meet with 37 Nobel Prize winners in physiology and medicine.

The participants included four beneficiaries of the Foundation for Polish Science’s START programme:

Thanks to an agreement between the FNP and the Council for the Lindau Nobel Laureate Meetings (Nobelpreisträgertagungen in Lindau), the Foundation – as the only organization in Poland – can propose candidates for participation in these meetings.

“Taking part in the 64th Lindau Nobel Laureate Meeting was an exceptionally valuable opportunity for me to meet in person the people whose discoveries have made the world what it is today. During the meeting I was able to establish many international and national contacts. I also gained valuable information on ways of furthering my scientific career and got a better idea of the prospects connected with research work in other countries of Europe and the world”. Wojciech Fendler, MD

“The meeting’s programme was filled with intensive activity. During its four consecutive days, 32 Nobel Prize winners delivered lectures. In the afternoons, in separate rooms, two-hour discussions were held with each of the day’s Nobel laureate speakers. The Nobel Laureate Meeting in Lindau also featured discussions in smaller groups: Master Classes and Science Breakfasts”. Łukasz Borowski, PhD

“At the meeting in Lindau I could witness the growing popularity (e.g. in Germany) of the MD-PhD model of training physicians, once widespread among Nobel Prize winners. As Professor Ciechanover remarked, this type of education enables you to make an informed choice between hospital work and fundamental research, and it broadens a researcher’s horizons. I think a similar programme should be promoted especially in Poland – it would certainly facilitate the identification of outstanding individuals”. Michał Lubas, PhD

The next Lindau meeting, devoted to economics this time, begins on 19 August. It is the fifth edition of meetings in this field. This year it brings together 18 Nobel laureates and 460 young researchers. The participants will focus on the problem of increasing inequalities in the distribution of incomes and goods in the world. The participants in these lectures and discussions include a beneficiary of the Foundation: Łukasz Lach from the AGH University of Science and Technology in Cracow, who received a START stipend in 2013.