FNP at the AAAS Meeting in Chicago 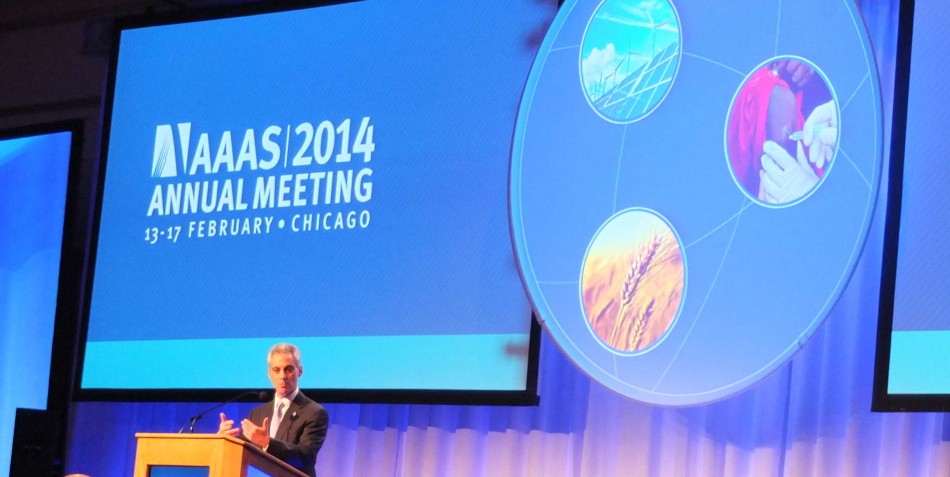 The Foundation for Polish Science, together with the Polish Embassy in the United States and the American Association for the Advancement of Science (AAAS, the world’s largest scientific society, among other things publisher of Science), was a co-organizer of the Science and Engineering Diaspora Engagement workshops held on 13 February in Chicago just before the AAAS annual meeting.

The symposium was an opportunity for representatives of different national science diasporas in the United States to promote good examples and exchange experiences. Discussions were held during four parallel sessions which were preceded by a panel featuring Prof. Maciej Żylicz, president of the FNP.

Prof. Żylicz thanked those present for the opportunity to take part in such an important event and to share his thoughts on the role of science diasporas not only in building cooperation between scientific communities from different countries but also in creating new standards and designing science development policies. The FNP’s president highlighted the Polish diaspora’s unique role in providing the best models for the Polish science system’s reform after 1989. He also cited his own example: thanks to experience gained during many years spent working at the University of Utah and Stanford University in the United States, he was able to contribute to the formation of modern grant institutions in Poland providing support for research projects, such as the National Science Centre (NCN) and the National Centre for Research and Development (NCBR).

Prof. Maciej Żylicz also took part in a roundtable that the AAAS organized on 14 February, devoted to the global challenges faced by scientists all over the world, including clean energy technologies, environmental protection, access to clean water, preventing the spread of diseases, sustainable development and economic growth, climate change.

The meeting, chaired by AAAS CEO General Alan Leshner, brought together high-ranking representatives of governmental and nongovernmental science management institutions, including Jean-Pierre Bourguignon from the European Research Council, Jian Chen from the China Association for Science and Technology, David Willetts from the Department for Business Innovation & Skills, UK, and Phillip Sharp, president of AAAS. The participants discussed the necessity and possibilities of providing support in the form of reliable scientific expert opinions to politicians and administration officials making key decisions on the above issues.