FNP partners with the prestigious “Innovators Under 35” competition 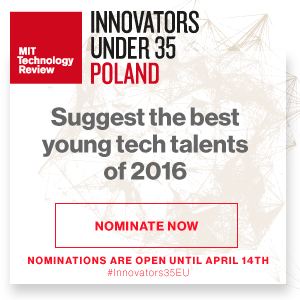 The Foundation for Polish Science has become a partner of the 2nd Polish edition of the prestigious competition “Innovators Under 35.” The competition is organized by MIT Technology Review, the oldest tech magazine published by the Massachusetts Institute of Technology. The competition recognizes young leaders in various fields of new technologies whose work is helping to achieve solutions to global problems and improve the quality of life of many people around the world.

The competition has been organized by MIT Technology Review for over 15 years. The steadily expanding group of its winners make up a global community for sharing knowhow among innovators and leaders of social change. The previous winners have included such figures as Konstantin Novoselov (winner of the Nobel Prize in Physics), Max Levchin (co-founder of PayPal), David Karp (founder of Tumblr), Sergey Brin (co-founder of Google) and Linus Torvalds (founder of Linux).

The finalists in the 1st Polish edition of the competition included Olga Malinkiewicz, named Innovator of the Year, as well as two winners of FNP competitions: Katarzyna Nawrotek and Michał Mikulski, named Social Innovator of 2015.

In 2016, another 10 winners will be named “Innovators Under 35” in the 2nd Polish edition of the competition. Two of them will receive the additional titles of Innovator of the Year and Social Innovator. This year a panel of experts from MIT Technology Review will also name three European finalists among all candidates taking part in European editions of the competition.

Nominations for the Polish edition of the competition opened on 10 February 2016. All nominees must be below age 35 at the end of 2016 and present an innovative technological project in fields such as Internet, hardware, software, biotechnology, nanotechnology, telecommunications, transportation and energy.

Nominations for the competition may be filed at the online platform http://www.innovatorsunder35.com/nominations until 14 April 2016.

After the nominations close, a panel of experts will evaluate the candidates’ profiles and name 10 winners of the Polish edition. The gala award ceremony for the Polish competition will be held in June 2016. Details of the gala will be announced later.

At the end of 2016, the entire Innovators Under 35 community will meet for Summit Europe, where they will discuss and propose solutions for current social problems in Europe.