Free-floating planets in the Milky Way 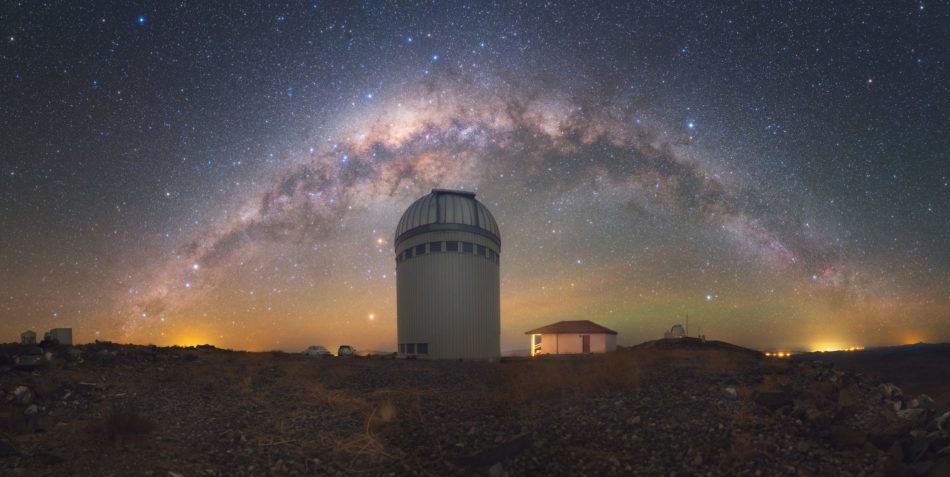 For a long time scientists have predicted the existence of Earth-mass free-floating planets, ejected from their parent planetary systems and gravitationally unbound to any star. Polish astronomers working at the OGLE survey at the Warsaw University Astronomical Observatory for the first time found hints of a population of these objects. The discovery has been published in the prestigious journal Nature.

Some planetary systems are not as stable as our Solar System. Planet-planet interactions in young planetary systems may cause collisions, smashing into the central star, or – most likely – ejections from the parent system. Free-floating (rogue) planets can also be formed as a result of other processes, like interactions in stellar clusters or stellar fly-bys. Unfortunately, rogue planets (except for very young objects) cannot be directly observed, because they do not emit light. They can be, however, detected with the technique of gravitational microlensing.

If a massive object (a star or a planet) passes between an Earth-based observer and a distant source star, its gravity may deflect and focus light from the source. The observer will measure a short brightening of the source star – explains Przemek Mróz, a PhD student at the Warsaw University Observatory and the lead author of the study.

The first attempt to find the free-floating planets was the 2011 analysis of microlensing events discovered by the Japan/New Zealand MOA survey. According to that work, free-floating Jupiter-mass planets should be twice as common as stars.

The 2011 paper attracted considerable attention. However, over the years, serious doubts were cast over the claims of a large population of Jupiter-mass free-floating planets – says Prof. Andrzej Udalski, the principal investigator of the OGLE project.

The 2011 analysis was based on a relatively small sample of events. Moreover, infrared surveys of young stellar clusters discovered significantly less substellar-mass objects, while theorists predicted relatively few Jupiter-mass free-floating planets (most of the ejected planets should be Earth-mass objects).

New observations conducted by the OGLE survey during the years 2010–15 solved this mystery. The survey uses a dedicated 1.3-m telescope located at Las Campanas Observatory, Chile, in one of the best astronomical sites in the world. Images collected using the Polish telescope are of better quality than those used in the previous analysis, which enabled astronomers to measure the microlensing timescales more precisely. Some regions of the sky were monitored once every 20 minutes. These very frequent observations enabled the team to discover very short duration microlensing events caused by free-floating planets.

We analyzed light curves of almost 50 million stars that were monitored for six years, which gives a total of 400 billion of photometric measurements – says Przemek Mróz. We did not find a significant excess of events lasting 1–2 days, which can be attributed to Jupiter-mass free-floating planets. This indicated that for every 100 stars, there should be less than 25 Jupiter-mass free-floaters, consistent with our expectations from planet formation theories.

Astronomers, however, found a handful of extremely short events, which lasted a few hours. Such events are likely caused by Earth- and super-Earth-mass objects.

The sensitivity of our experiment to such events is very low, meaning that a very few detections imply the existence of a large population of Earth-mass free-floating planets – says Udalski.

Nevertheless, we cannot exclude the possibility that some of the ultrashort events that we found may be unknown flaring stars or some other astrophysical sources – points out Dr Jan Skowron, a co-author of the study.

Currently, we reached the maximum sensitivity to short-timescale events from a single Earth-based observatory – says Przemek Mróz. Future space-based microlensing experiments, like WFIRST and Euclid, will enable the exploration of these short events in more detail.

The discovery would be impossible without long-term observations conducted by the OGLE sky survey. The project is among the largest and longest sky surveys, this year it celebrates its 25th anniversary. One of the first goals of the OGLE survey was searching for and studying dark matter using the gravitational microlensing technique. Current studies cover a large range of topics – searching for exoplanets, studying the structure and evolution of the Milky Way and neighboring galaxies, studies of variable stars, quasars, transients (novae, supernovae, tidal disruption events, etc).