How much carbon dioxide can a forest absorb? 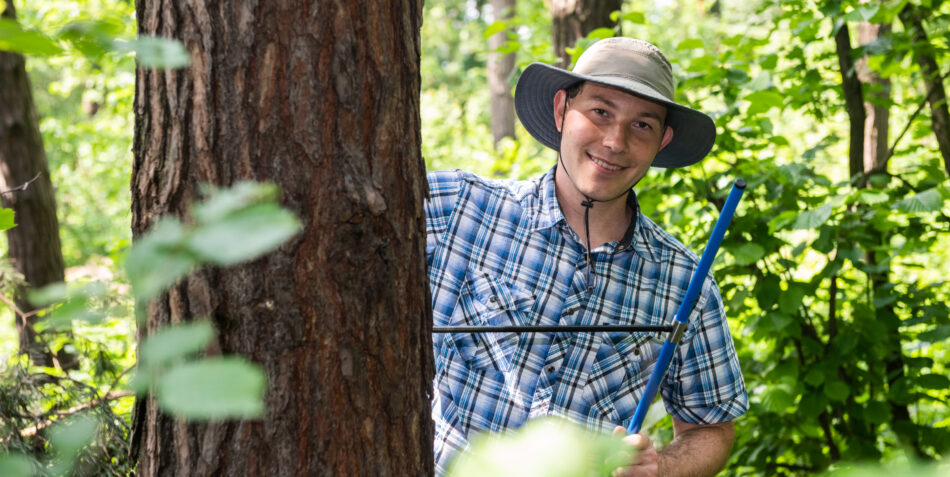 In the process of photosynthesis, trees capture carbon dioxide from the atmosphere and convert it into organic carbon which is accumulated in their biomass – wood, bark and roots. By being able to fix carbon dioxide, forest ecosystems help reduce its concentration in the atmosphere. And since carbon dioxide is the primary greenhouse gas, forest support us in fighting unwelcome climate change. In order to best utilise this capacity of forests to absorb carbon dioxide and mitigate climate change, it is important to know how capable different tree stands are in this respect, and what factors can increase or decrease this capability. These issues are being investigated by Flurin Babst, PhD, at the W. Szafer Institute of Botany, Polish Academy of Sciences (PAN), in Kraków, laureate of the HOMING Programme by the Foundation for Polish Science.

A key action to counteract climate change is to reduce carbon dioxide emissions from the combustion of carbon contained especially in fossil fuels. In addition to reducing CO2 emissions, it is also important to capture this gas from the atmosphere. Forests are considered natural and efficient absorbers of carbon dioxide, and this was emphasised, e.g., in the Paris Agreement under United Nations Framework Convention on Climate Change (UNFCCC), as signed in 2015 by 195 member countries. One of the targets of the Agreement was to improve the efficiency of CO2 fixation by forests, and many countries have adapted their forest management policies to achieve this goal. An example of this are Poland’s Forest Carbon Farms (LGW), which, according to State Forests Poland (LP), are to absorb a million tonnes of carbon dioxide over the next 30 years. In order to achieve this, at least 12,000 hectares of forests are being subject to some additional afforestation with rapidly growing and second-layer tree species, and measures are being taken to prevent soil surface damage.

The amount of carbon dioxide absorbed by a forest depends on a number of factors, including the carbon dioxide volume captured during photosynthesis, and how much of this is fixed in wood and how much is released into the atmosphere through tree respiration. Therefore, the important thing is the ratio of the carbon dioxide fixed during photosynthesis and that released during respiration. It is believed that the largest amounts of carbon are being absorbed by growing and developing trees, i.e. ones that are part of young and rapidly growing tree stands. Old trees generally do not grow, which in practice means that they fix only small amounts of carbon from the atmosphere. But other studies show that young forests, and especially those made up of a single tree species, can actually emit more CO2 than they absorb, and the largest amounts of carbon dioxide are absorbed by middle-age, i.e. about fifty-year-old, forests.

However, the intensity of the metabolic processes in trees depends not only on their age but also on certain environmental factors, such as density, temperature, humidity, availability of nutrients, and presence of weather anomalies. There are so many variables that any estimates as to the amount of CO2 absorbed by forests are beset with uncertainty. Consequently, there is a risk that important political decisions regarding climate change mitigation will be based on uncertain predictions. Current forecasts concerning carbon cycles in forests are based almost exclusively on mathematical models that rely on theoretical assumptions and calculations. There is shortage of empirical results from actual measurements conducted across various forest ecosystems.

This uncertainty challenges scientists to develop reliable predictions of forest functioning and productivity in relation to carbon dioxide absorption. Our article, published in “Trends in Plant Science” argues that it is impossible to understand why forests function the way they do or to enhance their models without advancements in field measurements conducted in forest ecosystems. “We believe that it is crucial to accurately measure individual processes found in forests to be able to compare results between various environments,” says Flurin Babst, PhD.

But long-term field experiments and observation using advanced techniques are expensive. Therefore, not all parameters can be measured for specific ecosystems. “It is necessary to rank these measurement parameters in order of relevance, meaning the importance of the information they provide, and taking into account measurement costs. This will produce a list of key measurements. We do hope that our article will spark off a debate among scientists and help develop a global consensus on this. Our overarching goal is to obtain reliable observational data to inform the development of enhanced plant models. These insights will provide a foundation for sustainable forest economy and more effective climate change prevention policy,” Flurin Babst, PhD, explains.

Flurin Babst, PhD, has earned his Master’s degree in Geosciences from the University of Basel, Switzerland, and then got his PhD from the Johannes Gutenberg University Mainz, Germany, for his thesis about climate factors affecting forest productivity in Europe. He completed post-doctoral internships at the Arizona University in Tuscon, USA, and at the Swiss Federal Institute for Forest, Snow and Landscape Research in Zurich, Switzerland.

In 2018, he received a grant under the HOMING Programme (Competition 5/2018). The goal behind that programme, implemented by the Foundation for Polish Science, was to encourage foreign scholars to come to Poland for their post-doctoral internships.