In September 2014, thanks to many years of efforts by the Foundation for Polish Science, classes for students were launched at the Polish Chair at Columbia University in New York. 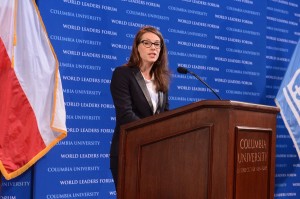 The idea of creating an interdisciplinary Polish Studies program arose when Western interest in Polish topics was declining and universities where Polish language and literature were taught began to cut budgets and staffing. The Kościuszko Foundation and the Foundation for Polish Science recognized this problem in the mid-1990s. After several years, a joint project was created for a Polish Chair at Columbia University. In 2005 FNP signed an agreement with Columbia committing USD 250,000 to building an endowment for the chair. The chair was established thanks to collection of endowment funds of over PLN 3 million in the US
and Poland. The fundraising target was reached in 2009 as a result of a campaign led jointly by FNP and the Polish Consulate General in New York. The current value of the Polish Chair endowment is about USD 6 million.

The concept for creating the Polish Chair at Columbia University assumed that Polish studies should be launched at leading foreign universities, should be interdisciplinary in nature, and should offer courses on Polish-related affairs across a wide range of social sciences, business, history and culture in a regional context (area studies). The Polish Chair should be an independent
research unit with the right to award degrees. Courses are to be held in the local language of the country and should be an integral and stable element of the university structure. These are not philology studies of the “literature & language” type traditionally offered at Slavic studies departments. The Polish Chair operates within the Columbia School of International and Public Affairs. Its program is addressed to students from all over the world.

Dr Małgorzata Mazurek won the international competition to head the Polish Studies Chair at Columbia. Dr Mazurek is a history and sociology graduate of the University of Warsaw. She has been a recipient of the Marie Curie Fellowship and fellowships from the Foundation for Polish Science, among others. She has lectured at institutions such as Humboldt University of Berlin and the University of Warsaw. Her research interests include the social history of Poland and Central & Eastern Europe in the
19th and 20th centuries, the history of the social sciences, historical anthropology, and Polish-Jewish relations.

Dr Mazurek: “The chair at Columbia is a good place to raise the question: What is Poland today? How do students from different parts of the world view our country and its historical complexities?”