How to Support Scientists from Ukraine? 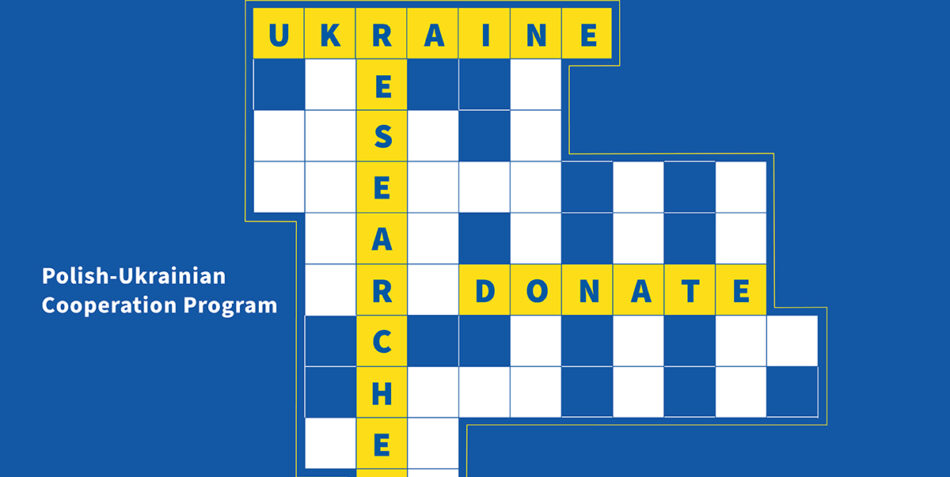 The Foundation for Polish Science (FNP) launched a fundraising campaign for scientists from Ukraine within the Polish-Ukrainian Cooperation Program. Interested parties may transfer financial support through the website pomocukrainie.fnp.org.pl for projects implemented by scientists or students from Ukraine.

In order to continue their scientific work, scientists from Ukraine need our support. The Foundation for Polish Science launched a website pomocukrainie.fnp.org.pl, which enables donations in order to extend the scale of support within the Polish-Ukrainian Cooperation Program realized by the FNP. The funds raised will be used exclusively to engage people from Ukraine in important scientific research for Ukraine, Poland, and the entire region.

“Within the framework of the Polish-Ukrainian Cooperation Program, this year the Foundation plans to finance up to six projects jointly implemented by researchers from Poland and Ukraine. Moreover, we seek to expand the participation of Ukrainian scientists in our program. Therefore, we launched a fundraising campaign that will allow us to increase the number of Ukrainian scientists involved in the implementation of the projects we fund. This is important! The funds raised will be used entirely to support the Ukrainian scientific community, namely to finance stipends or employment for people who were students or scientists at research institutions in Ukraine before the Russian aggression against Ukraine, regardless of the country in which they now reside. We will not use the funds donated by the donors to support Polish scientists who participate in the Polish-Ukrainian Cooperation Program; this part of the programme will be financed solely from FNP’s own resources. We invite you to engage in our action. Let us join in supporting Ukrainian scientists and their research for the benefit of our shared values,” says Professor Maciej Żylicz, President of the Board of the FNP.

The Foundation for Polish Science has been supporting scientists and research teams for over 30 years. Among the FNP’s beneficiaries are also scientists of Ukrainian origin. Yaryna Khmara, a winner of the FNP START programme who conducts research in Poland, describes the experience of war in the following way:

“I admit that it is very difficult to think about science now, even for me, someone in a safe country who did not lose her job because of the occupation or because her workplace – university or research institute – was destroyed. The whole world has already seen pictures of the destroyed Kharkiv Institute of Physics and Technology… Many Ukrainian scientists have joined the ranks of the Territorial Defense to defend their home and country. But it is necessary to think about science. After all, it is science, among other things, that moves this world forward, stands up for humanism, and makes the world, the environment in which we live, and our very lives better. And above all – safer. And we in Ukraine will need this very much. We will have to rebuild our country after the war, we will have to face many challenges. But for now, we must persevere.”

The fundraising campaign seeks both individual and institutional donors. The campaign is conducted through the website pomocukrainie.fnp.org.pl. The funds raised will be used to increase the number of researchers from Ukraine involved in the Polish-Ukrainian Cooperation Program.

The website pomocukrainie.fnp.org.pl provides a form that allows making online transfers, along with data necessary for a traditional transfer. One may also use the PayPal system to transfer funds. Moreover, donors may provide long-term support to Ukrainian researchers by establishing a standing payment order in their bank.

Furthermore, the Polish-Ukrainian Cooperation Program provides opportunities to create partnerships with the Foundation for Polish Science so as to improve the situation of Ukrainian researchers or implement their scientific projects.

Motivated by the tragic events in Ukraine, in the middle of March 2022, the Foundation for Polish Science launched the Polish-Ukrainian Cooperation Program in an act of solidarity with Poland’s neighboring country. In 2022, FNP plans to finance up to six scientific projects in the social sciences and humanities, implemented jointly by a pair of scientists from Poland and Ukraine. The projects will be selected in the framework of two competitions held this year. The call for applications for the first competition has been closed already. The deadline for applications for the second competition is September 30, 2022. For more information about the programme, see here.

The Foundation for Polish Science has been in operation since 1991. It is an independent, non-governmental, and non-profit institution that pursues the mission of supporting science. It is the largest source of science funding in Poland outside of the state budget. The Foundation implements its statutory goals by supporting distinguished scholars and research teams in all fields of inquiry, but also by assisting innovative ventures and the commercialization of scientific discoveries and inventions. The Foundation pursues these goals by awarding individual prizes and scholarships to scientists, granting subsidies for the implementation of scientific achievements into economic practice, and other forms of supporting important scientific endeavors (such as publishing programmes or conferences). Moreover, the Foundation is committed to supporting international scientific cooperation and increasing the scientific independence of early-career scientists.