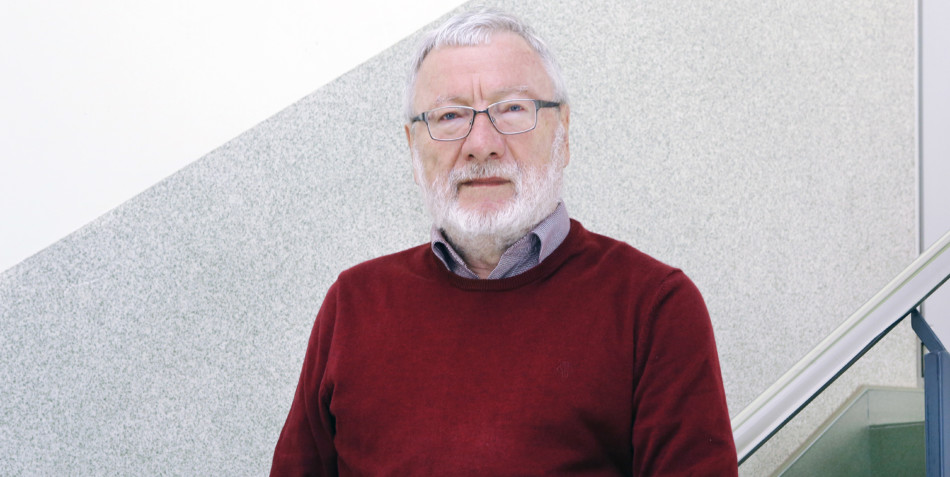 “I combine initiative with experience,” Prof. Andrzej Gałęski, winner of the 2018 Foundation for Polish Science Prize in the chemical and material sciences, explained in an interview with Karolina Duszczyk (Science in Poland editor at the Polish Press Agency). “I plan an experiment and try to predict how it will go, and then properly interpret the results. When it succeeds, we can expand our knowledge of phenomena or find applications and enter into cooperation with industry.”

KAROLINA DUSZCZYK: Within physics, a science describing the laws of nature, you found room for creative work, to develop materials that don’t exist in nature. How did this path begin?

ANDRZEJ GAŁĘSKI: From staring at the sky and reading Stanisław Lem. As a boy I often read popular science books, and was a member of the astronomy club in the observatory at the local culture centre. I observed stars and planets. I still have a telescope, and the sky continues to fascinate to me. It’s a hobby of mine. And when I went to the university, I decided to study physics, because physics explains everything in the world.

But you changed the scale from astro to nano. What do you find fascinating in the plasticity of polymers?

Those were the trends at that time. The nanoscale proved very important. I work in the Department of Polymer Physics at the Centre of Molecular and Macromolecular Studies of the Polish Academy of Sciences in Łódź, which is equipped with excellent apparatus—the best in this part of Europe. I did my doctorate on the use of laser light for studying the structure of polymers, and expanded on this topic for many years. My research showed that the mechanical behaviour of polymers depends very much on their structure. It turned out that polymer crystals are very flexible. Natural crystals of salt or sugar cannot be easily deformed plastically, at least not under household conditions when we use them in the kitchen. They are simply brittle, and they crack. But synthetic polymers deform plastically, so they can change shape without destroying the crystals. This happens through the so-called generation of defects, which can slip through the crystals. This discovery was not only scientifically fascinating; it also opened up nearly unlimited possibilities for applications.

Over the course of many years we learned how to create for example tape from polymers, now in common use, with greater strength than steel. But I should point out that this strength applies only to a specific direction of deformation. Across the tape the strength is not so high, but it is very high lengthwise. This led to the creation of excellent strings, tapes and cords. Synthetic polymers were called “plastics” because it was apparent that they were pliable and “plastic,” but only later did scientists explain why that is the case.

How did you hit on the concept of “looking for a hole in the whole,” i.e. “cavitation”?

When polymers are subjected to mechanical deformation they turn white, as the handle on a bucket will turn white at the bend. It turned out that the reason for this whitening was small bubbles arising as a result of tearing of the amorphous material surrounding the polymer crystals. The immediate cause for the whitening is the diffusion of light in these bubbles. By analogy to a similar phenomenon in water and other liquids, we called this phenomenon cavitation. The process of cavitation in polymers is more complicated than in water, however. Fragments of macromolecules form crystals, and where the fragments of macromolecules are random, holes appear. Nonetheless, the analogy to liquids helped us make several further discoveries.

What can be done to reduce the number of holes and ensure that the polymer doesn’t break?

Cavitation bubbles arise near tiny admixtures, additives and impurities. We call this the “germination” of cavitation. So we decided to remove from polymers any impurities or additives that could be “germs of cavitation.” We thought we would get rid of the holes, but it turned out there were even more of them! That’s how we discovered that cavitation in polymers is initiated by something else. It is caused by small, empty spaces in the amorphous phase. This led us to conclude that we could halt cavitation by filling these empty fragments with molecules of an organic substance that can adhere to the polymer. This concept is currently being elaborated by my advisee Dr Artur Różański. He is working on how to modify the amorphous phase so there is no cavitation and the material doesn’t break.

You also overcome the phenomenon of entangling of macromolecules. You simply eliminated entanglements, like Alexander the Great cutting the Gordian Knot. Why was this a scientific challenge?

The theory of entanglement, which Nobel laureate Pierre-Gilles de Gennes also worked on, holds that entangled polymers differ greatly from untangled ones. But at the time de Gennes was working on his theory, it was not known precisely what an untangled polymer is like. There was only one known example of polytetrafluoroethylene, which after polymerization was untangled. It was polymerized at a relatively low temperature, and the chain of macromolecules that grew immediately crystallized and had no opportunity to entangle with other growing macromolecules. We succeeded in doing this with polyethylene polymerized at room temperature or below. This polyethylene is entirely different from the one you can buy in plastics warehouses. Today we can also eliminate entanglements by dissolution in a solvent and precipitation.

What do we need untangled polymers for?

When there are very few entanglements, or none at all, we can stretch such a polymer even a thousand-fold! This means that from a small seed of polymer we can obtain a long, thin thread, with a thickness measured in nanometres. It is incredibly strong. For this we exploit the strength of the carbon–carbon chemical bond. It’s one of the strongest bonds occurring in nature. If we tried to break it mechanically, it would prove to have a strength on the order of 400 gigapascals. By way of comparison, a piano string, or steel of the highest quality, has a strength of 2 gigapascals. And when such macromolecules are aligned along the direction of deformation, such a fibre may achieve a strength of up to 200 times greater than the finest steel. Thus we achieve a dual advantage: first, an untangled polymer is easily deformed, and second, we can produce nanofibres with very high strength. Working in Poland, we showed that something like this is possible. We patented a method for obtaining such fibres by deformation in an extruder—a typical processing machine.

How big is your team now?

Some of my doctoral students emigrated after completing their dissertation and work in European or American universities. Others joined companies after finishing their doctorates, where they are highly paid engineers in leadership positions. Currently my team is made up of seven people. There were 10, but one of them, Dr Różański, formed his own team, as I mentioned earlier. There are three new people just beginning, and they still have a lot to learn. They are from Iran.

Are you more theoreticians or practitioners?

It’s hard to categorize us in that way. I would say that I’m an experimenter. I combine initiative with experience. I plan an experiment and try to predict how it will go, and then properly interpret the results. When it succeeds, we can expand our knowledge of phenomena or find applications and enter into cooperation with industry.

Our first implementations occurred many years ago. Every year 10,000 _______ of chalk-filled polypropylene was produced. Grains of chalk were coated with a polymer liquid so that the chalk would easily separate from the polypropylene and make holes, i.e. cause cavitation. Porous tape was pressed out of this material and stretched, and bags were woven out of this tape. Our patent has already expired, but sandbags used against flooding are still produced using this technology. We also launched an installation for production of tape from recycled bottles.

Mass production of plastics doesn’t suit ecological trends. Can anything be done about that?

We began research on biodegradable polymers 10 years ago. Together with the Institute of Biopolymers and Chemical Fibres, we attempted to synthesize aliphatic-aromatic polyester. We studied the properties of this polymer and made compositions that could have practical applications. It could be used to make cups, forks, plates and bags. But it must be stressed that biodegradation doesn’t have the same advantages and is not a substitute for collecting trash. The polymer is biodegradable only when placed in compost, i.e. in a special industrial installation with specially selected moulds and enzymes that destroy plastic. Biodegradable materials can disappear, but then the energy invested in their production also disappears. To recover that, such materials should rather be gasified and combusted rather than biodegraded. It’s important for us to be aware that biodegradation will not solve our problems with pollution of the environment, and cannot take the place of trash collection.

Are there other scientists in your family?

My wife, Ewa Piórkowska-Gałęska, is also a professor at the Centre of Molecular and Macromolecular Studies of the Polish Academy of Sciences. Last year she received the Award of the Minister of Science and Higher Education for her research on the development of polymer, biodegradable and nanocomposite materials, which are of interest to the packaging industry and agriculture. Our son just completed his doctorate at ETH Zurich, in the physics of superconductors and magnetism, and in the New Year begins his work at the Max Planck Institute.

Do you find time for anything other than research?

I’m an amateur beekeeper, with six hives. Due to the hot summer this year there wasn’t a very good harvest, and I collected just 10 litres of honey. I have a small vineyard where I grow various grapes for wine. I also grow trees and evergreen shrubs. I’m particularly proud of my cedar, which is now a big tree. I also like France, Italy, the Canary Islands—places where you can relax and explore.