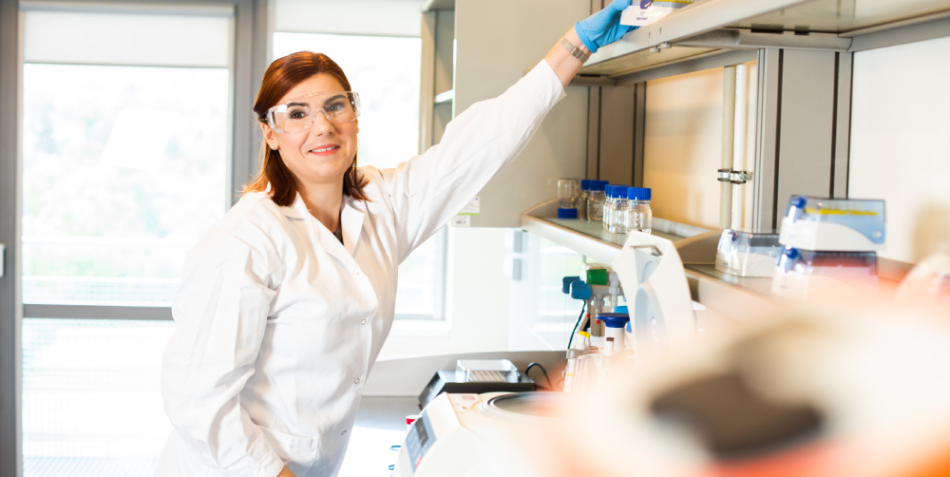 A profile of dr Irena Dapic, head of the laboratory at the International Research Agenda “International Centre for Cancer Vaccine Science” in Gdańsk.

Dr Irena Dapic is Croatian. At school, she was serious about becoming a doctor. Ultimately, however, she decided to study chemistry at the University of Zagreb. She also earned her Doctoral Degree there. From the very beginning she was drawn to exploring the great wide world. And professionally, despite the fact that researching the secrets of chemistry still seemed interesting to her, she was inclined towards biochemistry and biomedicine. During her studies, she spent some time in Oslo, and while preparing her Doctoral Thesis she went to gain experimental skills to the Academic Medical Centre in Amsterdam and to the University of Lyon, at the Faculty of Medicine and Pharmacy.

Her Doctoral Thesis involved the search for biomarkers, particularly the cellular determinants of atopic dermatitis. Irena researched mainly amino acids, as well as fatty acids and other lipids contained in the outer layer of the skin. She was looking for a correlation between the level of these compounds and the degree of disease development.

“I was pleased that my work was on the border between chemistry and medicine. It has always seemed to me that an interdisciplinary approach is more interesting and more productive than focusing on one field. In addition, I was pleased that my research was not art for art’s sake, but could prove useful for both doctors and patients.” Irena Dapic is cultivating this approach to this day, and it is clearly visible in all her activities.

For her postdoctoral studies, she went to the Netherlands, to the Van’t Hoff Institute for Molecular Sciences at the University of Amsterdam. It was here that she dealt with proteomics, a relatively new field dealing with proteins in a living organism.

As a chemist-analyst, she went on to work on bottom-up proteomics. It consists basically of the digestion (decomposition) of long twisted protein chains contained in the biological sample, the thorough analysis of all peptides resulting from digestion by mass spectrometry, and finally the re-submission of this information to learn as much as possible about proteins, and their detailed structure and its modifications.

Irena worked on samples taken from patients. This time around they were not associated with a specific disease. Her work had a more methodical significance although the patient’s interest was also in the background.

“We focused on keeping the sample as small as possible, so that we could carry out reliable analyses with the minimum amount of material,” she recalls. “This is important because many cases in medicine require biopsies to be performed and we would like to have minimally invasive procedures for patients.”

Another task of Dr Dapic was to try to accelerate the entire analytical procedure. To this end, she studied dried blood spots which might serve as evidence of a crime. The standard protein analysis procedure takes about 22 hours. The Croatian and her colleague from the laboratory, Bert Wouters, succeeded in developing a special chip thanks to which the procedure was reduced to four hours.

More chips like that have been created. “In case of different material, previously digestion had lasted all night, and we have shortened this time to 5-6 minutes. ”

Locate and describe the enemy

When Irena Dapic learned that the International Centre for Research on Cancer Vaccines was being established at the University of Gdańsk, she decided to apply immediately.

The Gdańsk Centre is the “apple of the eye” of the Foundation for Polish Science. It is one of several International Research Centres that have been established in Poland in recent years as part of the Foundation’s most ambitious and most important programme. The idea of this programme is to create innovative research institutes from the ground up, in which outstanding scientists from around the world will conduct high-quality scientific research.

Irene was tempted by three things.

Firstly, the subject matter of the Centre. The opportunity to work with patients’ material (this time from patients suffering from malignant neoplasms) and searching for better and more precise tools for identifying the disease and, in perspective, more effective ways of treating it.

She came to Poland armed with knowledge of proteomics, and the ins and outs of analytical tools for precise protein analysis. The main object of interest of the scientists from the Gdańsk Centre are the specific antigens unique to a specific, growing tumour, called neoantigens. The composition and appearance of these depends on the unique combination of genetic changes (mutations) characteristic of a given patient. They are the ideal target for a personalized cancer vaccine.

Its antibodies are crafted to recognise the enemy and trigger a whole cascade of natural defences to fight cancer.

This is, in short, the idea of specific cancer immunotherapy, tailored to an individual patient.

Irena and her team of researchers have an important task: to locate and describe the enemy.

The research approach here is the same as for the Amsterdam Institute. Bottom-up proteomics, or –  let’s reiterate –  protein digestion, mass spectrometry, peptide analysis.

“We work on samples from patients, including very aggressive primary brain cancer, in which survival, from the moment of diagnosis, is approximately 12-15 months,” says the researcher. “We work with oncologists from the Medical University of Gdańsk and a hospital in Edinburgh,” she adds (the University of Edinburgh is a strategic partner of the Centre).

Irena is aware of the importance of her current research from the medical point of view. She says that this is her main turn-on. At the same time, she is also very modest. “There is so much to discover. Our knowledge about cancer is still very limited. We need new techniques, and improvements of those that we already have at our disposal,” she emphasises. “It’s great to be able to work in such an interdisciplinary team. Cancer is a very difficult opponent, which is why the efforts of many people with different experience are needed here.”

Dr Dapic’s modesty is also evident in the answer to the question about what kind of boss she is. “Boss sounds so serious! I am just a group leader.” And it’s a very international group. It includes researchers from India, Great Britain, Turkey and the Netherlands. The first person from Poland has joined the team recently.

Irena came to Poland over a year ago. The only thing she feared was … the severe winters of a Central European country. After the first dozen or so months, she already knows that Polish winter is not particularly threatening although it can last sooooo long. Indeed, in 2019 it was cold until the end of May, and summer came almost immediately after winter.

She feels good in Poland. She likes Gdańsk. “I still don’t know how to get to the sea from here, so I haven’t had a chance to have a swim” [we had this conversation some time ago, so this could have changed].

“As a Croatian, I feel that your culture is close to ours. That’s why I feel almost at home here. Although –  I admit –  I can’t speak Polish. ”

I ask her about what makes her angry, what she doesn’t like in our country.

Except for the cold, which turned out to be much less severe, nothing comes to her mind.

“What about our bureaucracy?” I ask.

“Well, bureaucracy does slow our operations down. We had, for example, some delays in the delivery of equipment. But I treat my work as a kind of travel. And you need time in every journey, and you have to be patient. ”

I ask her about the conditions of scientific work, and differences between the Netherlands, Croatia and Poland.

“I don’t think the speed or results of work are fundamentally different. I came here to create the Centre from scratch, together with my colleagues. In Amsterdam everything was ready and laid on. All we had to do was enter the laboratory and start experimenting. In Gdańsk we have to plan everything from the beginning. Sometimes we have to use capabilities whose existence we did not suspect… (laughs). But it’s creative and enjoyable.”

“I can tell that you are an optimist. You look at the bright side of life.”

Irena has almost three years of stay in Poland ahead of her. Her contract lasts four years. There is a good chance that it will be extended. What will she do next? She hasn’t thought about this yet. “I know that I would definitely like to go into biomedicine and research with patients. It’s a fascinating occupation. ”