Dr Filip Taterka: The puzzles of an Egyptologist 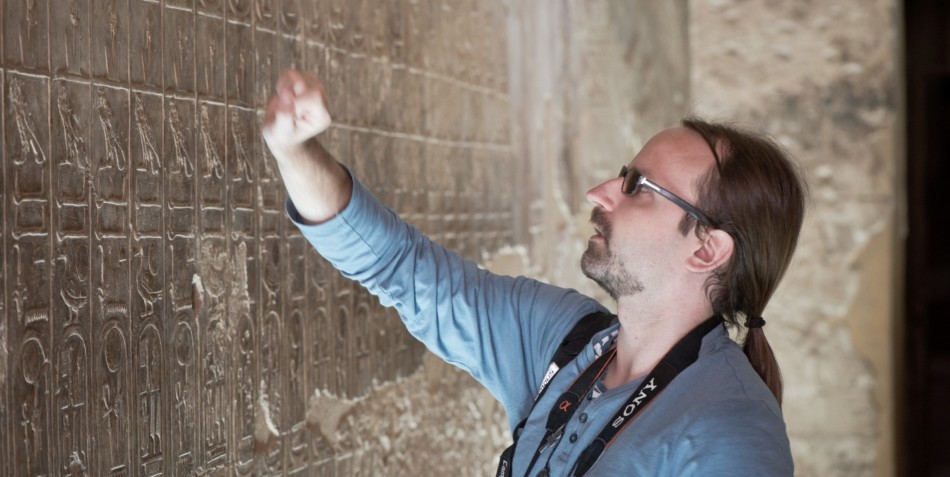 It might seem that a researcher of the temple of Hatshepsut and translator of tales written in a mysterious script would have to be a pretty busy person. But the mystery of the space-time inhabited by Filip Taterka, a 2019 laureate of the START programme of the Foundation for Polish Science, remains unexplored. While writing his 700-page doctoral dissertation in French, Taterka not only found time to make regular visits to Egypt, but also published three books along the way. And in his “spare” moments the Egyptologist arranges puzzles. His record is a puzzle of the Zodiac with 9,000 pieces, which his friends entering the room mistook for a carpet. But that’s nothing compared to the next puzzle he will take on, made of 36,000 pieces.

“In preschool I wanted to study dinosaurs,” Taterka recalls. “The first book on hieroglyphics was purchased for me by my father, who happened to spot it at the train station. From then on I dreamed only of studying ancient Egypt. For my first dig I went to Deir el-Bahari, first to the temple of Thutmose III and then to the temple of Hatshepsut. I could visit this place dozens of times, and when I think I know it all by heart, I always perceive some new details. And when I manage to spot something no one has noticed before, it’s fascinating!”

That, in a nutshell, is the story of young Filip’s path to his position as a PhD in archaeology at the Institute of Mediterranean and Oriental Cultures of the Polish Academy of Sciences. Today Filip Taterka has dozens of publications to his name on customs, religion, propaganda and power in Egypt. He argues that the pharaohs had no need for propaganda, because the ancients were suckled on the faith in their divinity. He reveals the secrets of the temple of “his” female pharaoh, Hatshepsut. He was the first in the world to determine that one of the bas-reliefs there presents a secretarybird, rather than a crane as previously assumed. This is not a matter of scholarly trivia, but essential to discovering the historically important land of Punt. Previously researchers had debated whether it lay in Africa or on the Arabian Peninsula. The secretarybird, depicted as a gift from a foreign people, lives exclusively in Africa.

Taterka honed his knowledge of the ancient Egyptian language at the Sorbonne during a student exchange. The use of this dead language is a peculiar experience, because no one teaches its pronunciation. To understand the written text, it is necessary to master the specific script, which employed only consonants.

When working in Egypt, it is essential not only to overcome cultural differences, but first and foremost to adjust to the climate. Even in autumn or early spring the mercury can hit 40°C. And despite the scorching heat, he must work, first for 8 hours a day at the archaeological station, and then seeking information in the literature necessary to solve new mysteries as they arise.

What about the curse? Aren’t researchers afraid of the dark forces protecting what was sealed so long ago? “No,” says Filip. “We have never encountered any curse. Most often in the places where the media report there is supposedly a curse, there is no physical record of it on the walls.”

It has long been Taterka’s habit to train his thoughts while arranging puzzles. “So far I haven’t had time to start the one with 36,000 pieces, but I will do it,” he says. “It doesn’t matter if a puzzle has 2,000 or more pieces, it just requires time and patience. Supposedly there are puzzles in which there are no two identical pieces. Unfortunately, with 9,000 or more pieces, this rule no longer functions. Imagine that we have already laid out a big chunk of the background, taking us several days, but somewhere there were pieces that fit but were not the right pieces.”

Filip Taterka has no instructional duties at the Polish Academy of Sciences, but he is still a teacher who inspires audiences. For him, the popularization of science is more than a hobby. “It’s a deeper phenomenon,” he says. “I have always taken the view that a scientists has two fundamental tasks. The first is to deepen knowledge, but then you must share this knowledge with as large a group as possible, so others also know. That’s what we are here for.”

And so he speaks, not only at science festivals, but also at the Pyrkon fantasy conventions, where a student invited him to appear following one of his passionate lectures. His talk was on how ancient Egypt is depicted in pop-culture products for children and young people. Taterka’s adventure with Pyrkon has continued for six years, and there are no indications that fantasy fans have had their fill of learning the mysteries of the civilization of the pharaohs. And did the pharaohs have their own fantasy literature? Sure! Even ancient writers could begin their tales with the phrase, “Long, long ago and far, far away….” Indeed, the START laureate is currently translating such literature into Polish. In his free time, of course.

As the translator explains, “These are stories that with a certain wink of the eye could be defined as ‘fantasy literature.’ Tales of kings from ancient times, about the magic and wonders that worked once upon a time. These texts were intended for a fairly sophisticated audience. There are allusions to various religious themes. It wasn’t like just anyone could pick them up and read them, particularly as very few people could read in those days. It was literature for a person who knew a lot and could appreciate it. They were texts of wisdom, relating what to do to be a good person and a good official. Besides bringing enjoyment to the reader, these stories usually conveyed a moral—that justice will prevail or that you mustn’t give up. That may sound banal, but in fact it’s not that obvious.” He adds a further commentary to his book: “I hope readers find something here for themselves and are not disappointed.”

It certainly doesn’t sound like a dry academic treatise.

Dr Filip Taterka from the Institute of Mediterranean and Oriental Cultures at the Polish Academy of Sciences is a laureate of this year’s edition of the START programme of the Foundation for Polish Science (FNP). START is the largest stipend programme in Poland for the finest young researchers from all fields of inquiry. The aim of the programme is to support outstanding young scientists under age 30. The laureates receive an individual one-year stipend of PLN 28,000 which they may use for any purpose. Over the 27 years of implementation of the programme, FNP has awarded prestigious START stipends to over 3,000 outstanding researchers (including this year’s laureates), in amounts totalling over PLN 81.5 million.