Dr Taras Palasyuk (2008 KOLUMB programme beneficiary) and his colleagues have become the first scientists to conduct ionisation of ammonia (transferring one hydrogen atom between neutral ammonia molecules [NH3], as a result of which a positively charged ammonium [NH4+] ion and a negatively charged amide ion [NH2‾] are formed). Their results, which will make it necessary to revisit the fundamental theories of Earth science, were published in Nature Communications, one of the leading scientific journals.

Dr Palasyuk’s research on ammonia demonstrated that at a pressure of approx. 120 gigapascals [GPa], i.e. ~1.2 million atmospheres (where 1 atmosphere is the pressure which we usually experience), ammonia transforms from a molecular phase to an ionic one, in which ion pairs clearly occur. This is the first example of a complete ionisation of a simple connection in which hydrogen bonds occur. The results the scientists obtained are of fundamental significance for Earth science and research on other planets, especially giant gas planets (e.g. Uranus and Neptune), which contain large amounts of ammonia. The discovery of an unknown ionic form of ammonia forces us to re-examine previous theories, such as the formation of these planets’ magnetic fields. 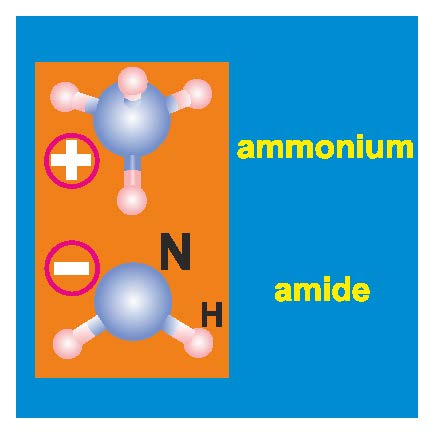 Figure 1. Diagram showing ammonium amide (NH4+NH2‾). This bond comes about as a proton (H+) is transferred between neutral ammonia (NH3) molecules. Such a “leap” becomes possible at a pressure of approx. 1.2 million atm.

Ammonia, like water, is a model system in which a dominant role is played by hydrogen bonds. In the case of water and ammonia, the phase diagrams are dominated by molecular phases. However, the authors of this study showed that at a pressure of around 120 GPa (~1.2 million atm), ammonia undergoes a phase transfer from a molecular phase to an ionic one. Apart from the experimental evidence pointing to this phase transformation, theoretical simulations illustrate a mechanism suggesting that the observed transfer is a unique one. The energy barrier that accompanies the process of transferring a proton from one molecule of ammonia to another is extremely low yet distinct, thereby favouring spontaneous formation of ion pairs. Therefore, unlike water, in ammonia an increase in pressure is not accompanied by symmetrisation of the N—H bonds.

Dr Taras Palasyuk, the publication’s main author, began his research on ammonia during his postdoctoral stay at the Max-Planck Institute for Chemistry in Mainz, Germany, one of the best laboratories involved in research of matter in conditions of high and extremely high static pressures. This stay was made possible thanks to an FNP KOLUMB international scholarship. At present, Dr Palasyuk is using the experience gained on his postdoc to create a world-class High-Pressure Laboratory at the Institute of Physical Chemistry of the Polish Academy of Sciences.