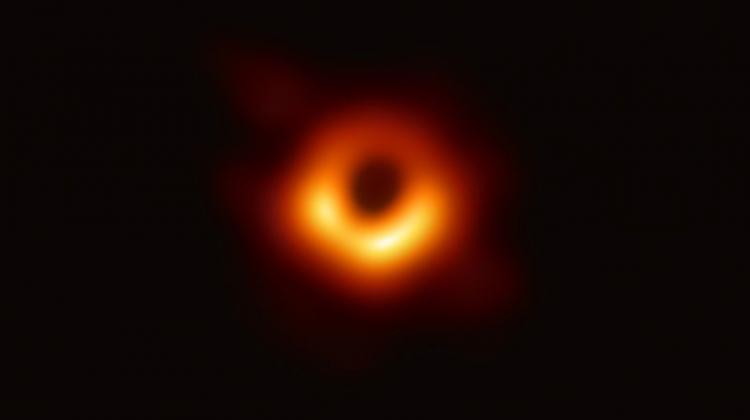 Dr Maciej Wielgus, a laureate of FNP’s VENTURES and START programmes, is a member of the team of astronomers who presented the first photo of a black hole. The photo was taken through eight telescopes forming a “virtual telescope” as large as the Earth.

The photo was presented at six press conferences held simultaneously in Brussels, Santiago, Shanghai, Taipei, Tokyo and Washington. It depicts a black hole located at the centre of the Messier 87 galaxy, 55 million light years from Earth, with a mass 6.5 billion times greater than our sun.

Black holes are objects whose existence was predicted by Albert Einstein’s general theory of relativity, although the possible occurrence of such objects was conjectured earlier. A black hole is an object of huge mass but small size, with such a strong gravitational pull that even light cannot escape it. The boundary of a black hole is the “event horizon,” from which the research project took its name.

The photo was made using an astronomical telescope called the Event Horizon Telescope, funded among other sources by the European Research Council. It is a “virtual telescope,” meaning that it is comprised of numerous telescopes around the world. In 2017, when the observations were made, it had eight elements, located in Europe, South America, Central America, North America, Hawaii and the South Pole.

As Dr Maciej Wielgus explained, scientists have strong arguments for claiming that they actually observed the shadow of a black hole, and not some other effect or object. “The size of the image complies well with the predictions of the general theory of relativity for a black hole with a mass of 6.5 billion suns, suggested by independent results based on an analysis of the dynamics of stars in galaxy M87,” he said.

The results of the observation were written up in six scientific articles, which were published on 17 April 2019 in a special issue of The Astrophysical Journal Letters.

Dr Wielgus was responsible for the statistical validation of the data and modelling of systematic errors. He also worked on the algorithms for calibration of data as well as polarization and temporal variability of the observed sources.

At the Faculty of Mechatronics at the Warsaw University of Technology, Dr Wielgus earned a master’s degree in automation and robotics and in 2016 completed his doctorate at the Institute of Micromechanics and Photonics.