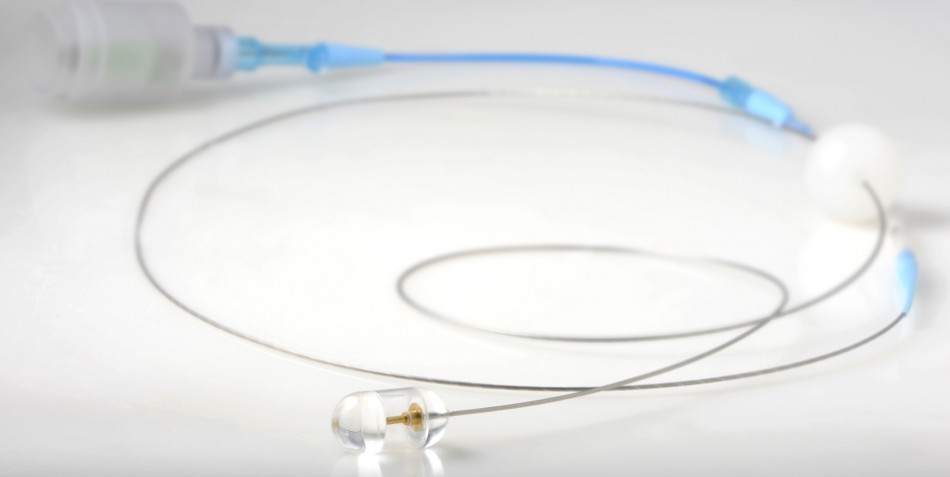 Dr Michalina Góra, a beneficiary of the Foundation for Polish Science’s VENTURES programme, has teamed up with US researchers to build a new device which permits early identification of pathological changes to the oesophagus in a remarkably quick, simple and comfortable way.

Almost all of us has experienced unbearable burning in the oesophagus, commonly known as heartburn. When the symptoms are long-lasting, this may result in the development of an illness known as Barrett’s oesophagus, and this can in turn lead to the development of oesophageal cancer. Since oesophageal cancer discovered early is entirely curable, an effective diagnostic method is much needed. The process mostly used in Poland employs a gastroscopy of the upper section of the alimentary canal, usually conducted under local anaesthetic of the throat. Yet this method has major drawbacks, including significant discomfort for the patient and insufficient precision, bearing the risk of ignoring early pathological changes. In other countries (e.g. the USA), where this test is done under general anaesthetic, there is also the problem of high costs.

A solution to these problems is the capsule designed and constructed by Polish researcher Dr Michalina Góra with researchers from the American group of Prof. Gary Tearney at Massachusetts General Hospital and Harvard Medical School in Boston (USA). This innovative equipment allows early recognition of pathological changes to the oesophagus during a test conducted in way that is comfortable for the patient and lasts just a few minutes. The probe comprises a small capsule the size of the average grape, mounted at the end of a thin, pliant tether connected to a console. This tether contains a fibre-optic cable finished with a specially designed optic which focuses light on the tissue through the capsule wall. Receiving full information from the whole section of the oesophagus takes place by turning the fibre-optic cable and optic within the probe and navigating the capsule up and down in the oesophagus. The equipment uses optic tomography, previously used mostly to image the human eye. This technology provides a very precise, three-dimensional image of the internal structure of the tested object in real time. The whole procedure, from the patient’s swallowing the capsule to its removal, takes on average six minutes, in this time providing four full, three-dimensional reconstructions of the oesophagus. Importantly, no anaesthetic is required to perform the test. Following the test, the capsule probe can be disinfected and reused, which significantly reduces the costs of the procedure.

The design has been tested successfully in the USA in clinical studies on seven healthy patients and five patients diagnosed with Barrett’s oesophagus. “The results obtained were characterised by a surprisingly good quality thanks to the natural peristalsis of the oesophagus. The peristaltic movements caused the oesophagus walls to cling tightly to the capsule while it moved in the oesophagus, and as a result the imaging of the tissue was in the focus of the optic,” says Dr Michalina Góra.

The innovative equipment was first presented to a wider audience in an article published in the prestigious journal Nature Magazine (http://www.nature.com/nm/journal/vaop/ncurrent/full/nm.3052.html). “The publication was met with very large interest from the scientific and medical communities and industry, which shows the method’s large potential as well as the need for new ways of diagnosing Barrett’s oesophagus”, says Dr Góra. “That is why we want to widen the clinical studies to more hospitals in the United States. We will also be working on the next generations of the capsule, which will mean that it will be able to recognise other illnesses of the alimentary canal too,” adds the Polish researcher.

Dr Michalina Góra obtained her doctorate from the Institute of Physics of the Nicolaus Copernicus University in Toruń. As part of her doctoral work in the team of Prof. Andrzej Kowalczyk and in collaboration with Prof. Maciej Wojtkowski and Prof. Piotr Targowski, she worked on application of optic tomography in non-invasive imaging of objects of the eye as well as works of art. Following her doctorate, in October 2010 she began a post-doctoral placement in a multidisciplinary group led by Prof. Gary Tearney at Massachusetts General Hospital and Harvard Medical School. Her main research project concerns non-invasive imaging and early diagnosis of illness of the alimentary canal. As part of this project she is involved in designing and constructing optical systems and imaging probes as well as their implementation and application in clinical studies involving patients.