Dr. Julia Borcherding specializes in early modern philosophy, with a particular interest in ethics, epistemology, metaphysics and the points at which they intersect. She is renowned internationally as a leader in finding new approaches to early modern philosophy. Although she is only at the beginning of her academic career, she has published extensively and is already considered a leading interpreter of Leibniz’s philosophy, one of the most famous early modern philosophers. In addition, she engages in research on authors who – until recently – have been left on the margins of the history of philosophy of this period; especially, but not exclusively, female philosophers such as Anne Conway and Margaret Cavendish. 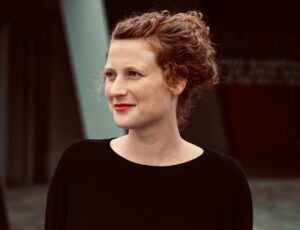 Dr. Julia Borcherding graduated in 2011 with a degree in philosophy from Humboldt University in Berlin. She received her doctoral degree from Yale University (the USA) in 2017. From 2017 to 2019, she held a postdoctoral fellowship at New York University. Since 2019, she has been a lecturer at the University of Cambridge and a fellow at Trinity College Cambridge. She specializes in early modern philosophy with a special focus on the seventeenth century, with an emphasis on epistemology, ethics, and metaphysics. She also has a strong interest in women philosophers of the period, feminist philosophy, Cambridge Platonism, the philosophy of Iris Murdoch, and various issues in medieval philosophy. She devoted her dissertation to investigate central aspects of Leibniz’s theory of knowledge and show how they underpin his ethics by examining the connection between the notions of wisdom, justice, and freedom in his moral and political philosophy. She has published or is in the process of publishing articles and book chapters on Leibniz, Conway, Spinoza, Locke, Arnauld, Cavendish, and Du Châtelet.