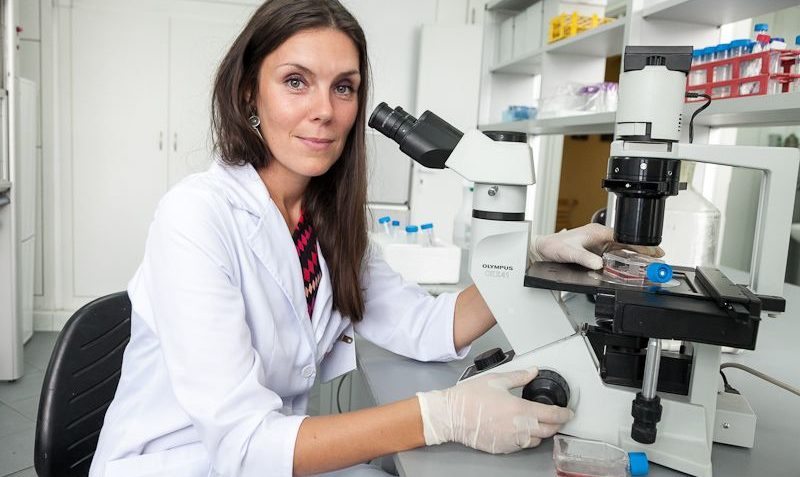 Winner of FNP programs, Professor Magdalena Król from the Faculty of Veterinary Medicine at the Warsaw University of Life Sciences has received the prestigious Proof of Concept grant of the European Research Council for the continuation of her cancer treatment research.

Professor Magdalena Król, scholarship holder of the START FNP program twice and the winner of the FNP POMOST program (co-financed by the EU’s European Regional Development Fund), was among 55 outstanding researchers from 17 countries who received the European Research Council (ERC) Proof of Concept grants in the first from the three rounds of this competition in 2020. Previous winners of grants awarded by the ERC receive them to examine the commercial or social potential of their research results. The grant amount is EUR 150,000.

In 2016, Magdalena Król received over EUR 1.4 million from the ERC as part of the prestigious Starting Grant for a five-year research project aimed at explaining the phenomenon of TRAIN (TRAnsfer of Iron-binding proteiN), which she discovered. Król noticed that certain cells of the immune system transmit a specific group of proteins to cancer cells, and she came up with the idea of utilizing this knowledge in oncological practice. This mechanism can probably be used to precisely deliver cancer-destroying drugs directly to the tumor. If these assumptions are confirmed, it may mean a breakthrough in oncological therapy.

The purpose of Król’s research within the Proof of Concept ERC grant will be to validate the operation of MDC (Macrophage-Drug Conjugate) technology in pancreatic cancer in the most reliable preclinical model possible: the PDX (Patient-derived xenograft). The effectiveness of the therapy will be confirmed on mice. Positive research results are key to further developing the project in cooperation with a large pharmaceutical company.

Magdalena Król is a specialist in experimental oncology and the head of the Department of Cancer Biology at the Institute of Biology, Warsaw  University of Life Sciences. Her work has been repeatedly appreciated and awarded. She received the START FNP scholarship, the Ministry of Science and Higher Education scholarship for outstanding young scientists, the Pfizer Animal Health scholarship, the “L’Oreal for Women and Science” scholarship, and the UNESCO award for women. In 2013, Król received the Scientific Award of the Polish weekly Polityka. In 2014, she was the winner of the PKN Orlen plebiscite “Polacy z werwą” (Poles with verve) and, in 2017, she won Gazeta Wyborcza’s “Person of the Year 2016” award in the “Science” category. At the end of December 2017, Król’s project implemented within the scope of the Starting Grant was recognized by the ERC and placed among the 10 sample projects out of over 7,000 that received funding during the 10 years of its ERC’s operation.

Proof of Concept (PoC) grants have been awarded by the ERC since 2011. As part of the funding in the amount of EUR 150,000, the current ERC grant (Starting, Consolidator, Advanced, or Synergy) winners can finance research that was not foreseen in the original projects, which has great commercial or social potential. So far, over 1,000 people have received PoC grants. Magdalena Król joined two other outstanding scientists who implement ERC grants in Polish scientific institutions and have received the Proof of Concept grant in previous years: Professor Janusz Bujnicki from the International Institute of Molecular and Cell Biology in Warsaw (2012) and Professor Piotr Sankowski from the University of Warsaw (2015). Bujnicki is the winner of FNP programs START, TEAM POIG, Ideas for Poland, IMPULS, MASTER, and TEAM POIR, whereas Sankowski is the winner of the FNP Ideas for Poland program.

In 2020, the ERC plans to award up to EUR 25 million within Proof of Concept grants.

Congratulations to our winner!