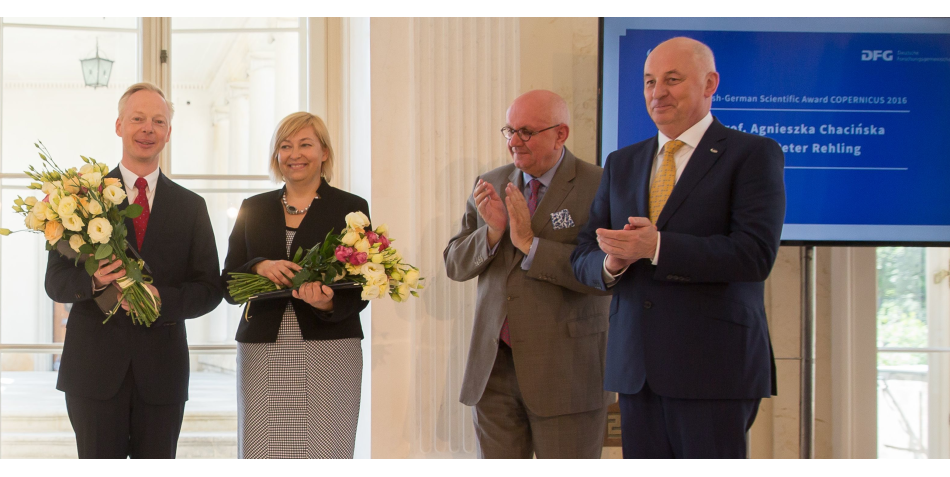 The COPERNICUS Polish-German Scientific Award ceremony was held on Tuesday, 7 June 2016 at the Palace on the Isle in Warsaw’s Royal Łazienki Park. In the 6th edition, the award was presented by the president of the German Research Foundation (DFG), Prof. Peter Strohschneider, and the president of the Foundation for Polish Science (FNP), Prof. Maciej Żylicz to Prof. Agnieszka Chacińska of the International Institute of Molecular and Cell Biology in Warsaw and Prof. Peter Rehling of the Göttingen University Medical Centre.

The COPERNICUS Polish-German Scientific Award has been given since 2006 every two years jointly by the Foundation for Polish Science and the German Research Foundation. The purpose of the award is to honour cooperating researchers from Poland and Germany who have demonstrated outstanding research accomplishment as a result of their cooperation. The award is received by two scientists—one from Poland and one from Germany—selected in a competition across all fields of inquiry.

The winners of this year’s edition have been recognized for conducting joint research leading to the discovery of key mechanisms for biogenesis of mitochondria. Each of the winners will receive a prize of EUR 100,000.

The research cooperation of Prof. Agnieszka Chacińska and Prof. Peter Rehling begun in 2001 has generated a number of important answers to fundamental questions about the manner of intracellular transport of proteins from cytosol to mitochondria.

Mitochondria are organelles known as the “powerhouse of the cell.” They are the location where the cell respiration process occurs, generating ATP, a source of energy. Mitochondria are also involved in a number of other processes, such as regulation of the life cycle of the cell, differentiation, growth and death of the cell. Irregularities in the functioning of mitochondria result in many different illnesses. Mitochondria are built of hundreds of different proteins, the great majority of which are coded in the cell nucleus. These proteins are synthesized in the cytosol and then transported to the inside of the mitochondria. The polypeptide chain must also cross through both the external and internal mitochondrial membrane.

The research by professors Chacińska and Rehling revealed the details of this complicated mechanism, first identification of the imported protein by the translocase of the external membrane (TOM complex) and then handing it over to the translocase of the internal membrane (TIM23 complex). The joint work of the laureates resulted in identification of crucial components of both translocases. It also resulted in new conceptions concerning the cooperation between the translocases. This research was conducted using both genetic methods and techniques of molecular and cell biology and biochemistry. Their findings have revolutionized views on the dynamics and coordination of processes of import of mitochondrial proteins, and have been included in the most important international textbooks.

The importance of the cooperation between Prof. Agnieszka Chacińska and Prof. Peter Rehling is demonstrated by their 17 joint publications in recognized global scientific journals, including Cell and Science. Significantly, the cooperation of these scientists launched an intensively developing scientific exchange of participants in doctoral studies and postdoctoral fellowships between the centres in Warsaw and Göttingen.

Additional information about the award

Candidates for the COPERNICUS Polish-German Scientific Award are nominated by members of the scientific community. In the 2016 edition self-nominations were also accepted for the first time. The winners are selected by a jury composed of distinguished scientists from Poland and Germany appointed by FNP and DFG. The winning researchers are expected to have made a special contribution to German-Polish cooperation, combining their complementary experiences, knowledge and resources toward joint solution of research issues. The results of their cooperation should have the potential to open up new perspectives in their research fields or other fields of science. There were 28 applications evaluated in the 2016 competition.

Celebration at the Palace on the Isle

Guests at the celebration at the Palace on the Isle included German Ambassador to Poland Rolf Nikel, Polish Senator Prof. Jan Żaryn, Deputy Minister of Foreign Affairs Katarzyna Kacperczyk, DFG president Prof. Peter Strohschneider, president of the Polish Academy of Sciences Prof. Jerzy Duszyński, chairman of the council of the Polish National Science Centre Prof. Michał Karoński, and German and Polish members of the jury for the Copernicus Award. Remarks on the joint research work of the winners were given by Prof. Nikolaus Pfanner. An address was also given by German Ambassador Rolf Nikel.