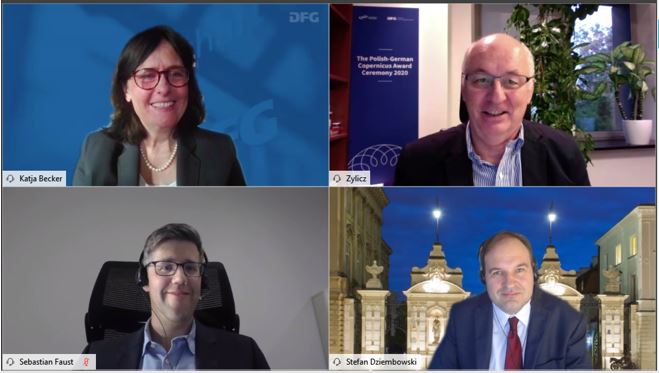 On Monday, October 12 this year, at 4 p.m., the Foundation for Polish Science (FNP) and the German scientific organization Deutsche Forschungsgemeinschaft (DFG) jointly awarded the COPERNICUS 2020 Polish-German Scientific Award. The modest meeting was organized online, in place of a stationary ceremony canceled due to the increasing pandemic risk. The Award was received by the winners of the eighth edition: Prof. Stefan Dziembowski from the University of Warsaw and Prof. Sebastian Faust from the Technical University of Darmstadt.

The virtual ceremony of COPERNICUS 2020 Award presentation with the participation of the winners, along with representatives of the FNP and the DFG began with opening speeches by Prof. Maciej Żylicz, President of the FNP, and Prof. Katja Becker, President of the DFG, who emphasized the importance of extensive scientific cooperation between Poland and Germany. Prof. Becker emphasized that the goal of the COPERNICUS program and the bilateral cooperation is to build a better world for the societies of Poland and Germany and all of Europe.

In his acceptance speech, Prof. Stefan Dziembowski thanked eminent experts for their recommendations for the Award, Prof. Yuval Ishai from the Technion – Israel Institute of Technology in Haifa and Prof. Moti Yung from Columbia University in New York, but also the entire jury of the Award. Dziembowski also emphasized that students also showed great commitment during the research. In turn, Prof. Sebastian Faust noted that cooperation between experienced researchers and students should be institutionalized by creating joint research centers or international postgraduate schools.

The COPERNICUS 2020 Polish-German Scientific Award has been awarded every two years since 2006 by the FNP and the DFG. The purpose of the Award is to honor cooperating researchers from Poland and Germany who can demonstrate outstanding research achievements resulting from this cooperation. The Award is granted to a pair of scientists – one from Poland and one from Germany – selected in a competition covering all fields of science. The amount of the prize is EUR 100,000 for each researcher.

Prof. Stefan Dziembowski and Prof. Sebastian Faust were awarded for outstanding achievements in the field of cryptography and IT security that resulted from their cooperation.

The next, stationary ceremony will be held in Poland in two years, and it will honor the winners from both the 2020 and 2022 edition of the COPERNICUS Award.