Presentation of the FNP Prizes 2013 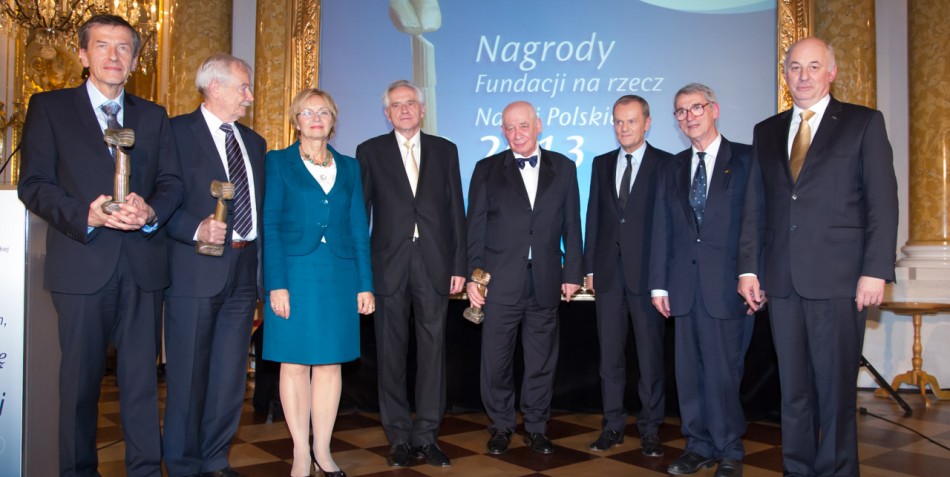 The ceremony was graced with the presence of top government representatives: Prime Minister Donald Tusk and Minister of Science and Higher Education Prof. Lena Kolarska-Bobińska. Invited guests also included Olgierd Dziekoński, secretary of state in the President’s Office, Prof. Michał Kleiber, president of the Polish Academy of Sciences, Prof. Andrzej Jajszczyk, director of the National Science Centre (NCN), Prof. Michał Karoński, chairman of the NCN Council as well as numerous representatives of the academic community, the prize-winners’ guests and media.

Opening the ceremony, FNP President Prof. Maciej Żylicz highlighted the need to promote quality research: “Rewarding research that shifts the boundaries of knowledge is the fundamental purpose of the FNP’s activity, and the FNP Prizes are the best illustration of how this philosophy is pursued”.

Prime Minister Tusk also spoke of the social role of leaders – individuals outstanding in their fields who, like the prize-winning researchers, define the direction of progress. The prime minister mentioned two other key elements in the development of science: the potential of young people and the excellent research infrastructure that has been set up in Poland thanks to European funding – today it is one of the best in Europe.

In her first speech addressed directly to the scientific community, Prof. Kolarska-Bobińska emphasized the importance of development founded on innovations as a means for Europe to recover from the crisis. “This is the first time that Europe is counting so strongly on this direction of development, and that science is at the very centre of changes occurring in society”, she said.

The first person to receive his FNP Prize was Prof. Andrzej K. Tarkowski, winner in the life and earth sciences. He gave a moving speech thanking family and friends and “the most wonderful team under the sun”. Prof. Tarkowski highlighted the role of women, whose support facilitates the successes of “people with a passion, in other words egotistical addicts who gain pleasure from practising science” but who themselves are often underappreciated by the scientific community.

Prof. Sylwester Porowski, winner of the prize in the chemical and materials sciences, outlined the research path that had brought him to his prize-winning achievement. He mentioned Prof. Leonard Sosnowski, the father of semiconductors in Poland, who supervised him when he was embarking on a research career, and spoke about the history of the Institute of High Pressure Physics of the Polish Academy of Sciences which he helped found, and also about his successors.

The winner of the prize in the mathematical, physical and engineering sciences, Prof. Marek Żukowski, emphasized the role of his international associates in his career as a researcher. He also shared the thought that it was extremely important to take risks in deciding on research – it is actually unpopular, often controversial topics that offer a chance to achieve ground-breaking results. Prof. Żukowski also appealed for appreciation for the importance of fundamental research, whose added value is that it creates highly qualified staff who are of key importance for developing an innovative knowledge-based economy.

Prof. Jan Woleński, who received the prize in the humanities and social sciences, juxtaposed science with philosophy using the “black cat in a dark room that isn’t there” metaphor. He described what kind of project the Lvov-Warsaw school had been, bringing together logician-mathematicians from Warsaw and philosophers from Lvov, and spoke of its legacy.

The prize-winners’ academic achievements were presented to the guests in four films, one about each of the distinguished researchers.

The award ceremony also included brief concerts dedicated to each winner in turn, performed by highly gifted young musicians whose talent can develop thanks to support from the Polish Children’s Fund.