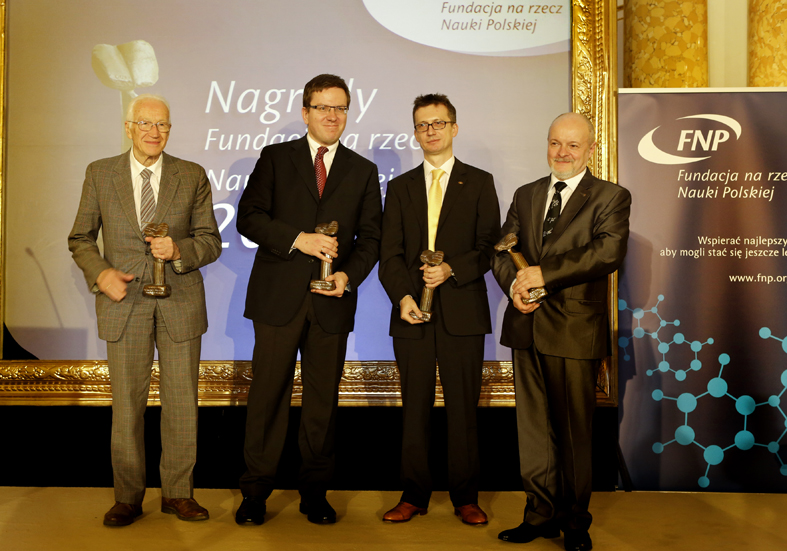 The official presentation of diplomas to this year’s winners of the FNP Prize took place on 3 December at the Royal Castle in Warsaw. The recipients are professors Tomasz Goslar, Karol Grela, Iwo Białynicki-Birula and Lech Szczucki.

The event was attended by representatives of the government administration, science officials and members of the research community. The FNP’s president Prof. Maciej Żylicz opened the ceremony, among other things speaking about the necessity of pursuing a culture of quality in scientific research and in all the administrative activity that accompanies it. “Next to systemic change, such as legal changes making it easier for business to increase its share in financing research, this is a fundamental condition for improving the position of Polish science in the world. Today we are rewarding the best of the best, and it is precisely the quality criterion that should always decide about who receives support”, he said.

The FNP Council’s chairman Prof. Andrzej Jerzmanowski introduced the members of the council, which acts as the FNP Prize jury, and the multi-stage procedure for selecting the winners. There was a moment of silence to honour the memory of Prof. Janusz Sławiński, a long-time member and chairman of the FNP Council who passed away recently.

The first recipient was Prof. Tomasz Goslar, who was awarded the prize in the life and earth sciences. In his speech he underlined the role of inspiration – important moments that give life and research new direction. “There were several such breakthrough moments in my life, for example the first fascination I felt at the sight of a wall of glass tubes in a laboratory vacuum system at the Silesian University of Technology in Gliwice. This fascination, which decided about my focusing on radiocarbon, has already continued for 37 years”, he said.

Prof. Karol Grela, who received the prize in the chemical and materials sciences, mentioned that when he was starting his adventure with science, many fundamental discoveries related to olefin metathesis had already been made. Guided by a desire to expand the existing body of knowledge, he nevertheless has managed to play an enormous role in a major breakthrough in this field: getting metathesis into broad industrial application. Thanking his numerous young associates, Prof. Grela underlined the importance of the flow of experience between successive generations.

The speech of Prof. Iwo Białynicki-Birula, who won the prize in the mathematical, physical and engineering sciences, focused on answering the question of how he became a scientist. Invoking his experiences from as far back as his childhood under Nazi occupation, the professor mentioned a hunger for knowledge as an essential quality that shapes future researchers and stays with them throughout their lives.

The fourth recipient (in the humanities and social sciences), Prof. Lech Szczucki, could not attend the ceremony for health reasons. His son Jan Szczucki accepted the prize on his behalf.

The official part of the ceremony concluded with a speech by Prof. Lena Kolarska-Bobińska, the minister of science and higher education, who congratulated the “best of the best” rewarded by the Foundation and highlighted the role of building models, something of which the four winners are an example. “This is a special moment for science. People are increasingly looking for answers to fundamental questions about the reality around us. Science provides those answers, and expectations towards it are growing”, Prof. Kolarska-Bobińska said.