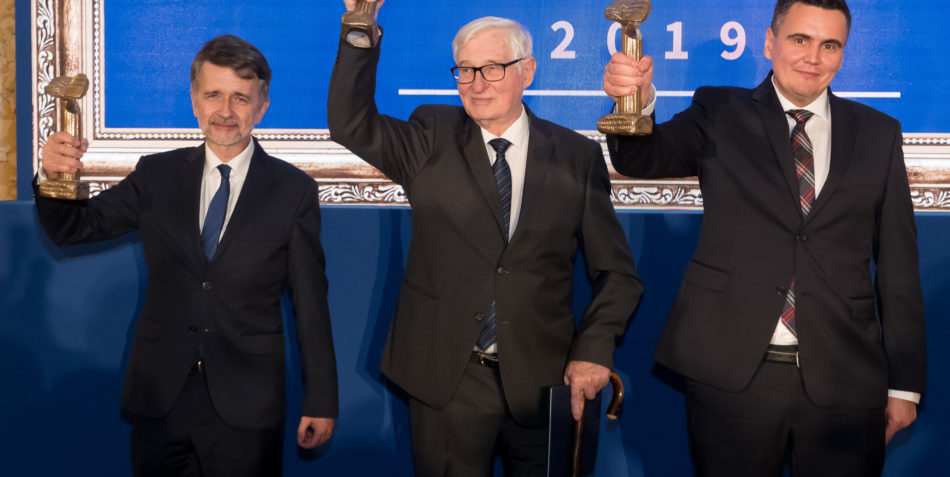 For the 28th time, the Foundation for Polish Science (FNP) has awarded the FNP Prizes, regarded as the most important scientific honour in Poland. During a gala at the Royal Castle in Warsaw on 4 December 2019, the FNP Prizes were received by three outstanding professors: Marcin Drąg from the Faculty of Chemistry at the Wrocław University of Science and Technology, Andrzej Kossakowski from the Institute of Physics at Nicolaus Copernicus University in Toruń, and Andrzej Wiśniewski from the Faculty of Psychology and Cognitive Science at Adam Mickiewicz University in Poznań.

The awards were delivered to the winners by FNP president Prof. Maciej Żylicz and the chair of the Foundation Council, Prof. Leon Gradoń. Each of the laureates received a unique statuette designed and executed by sculptor Ryszard Kozłowski and a cash prize of PLN 200,000.

“The aim of science is to seek the truth, and then share it with other scientists and society,” Prof. Maciej Żylicz said in his address. “All good science will ultimately prove useful, although it may take many years.”

Prof. Marcin Drąg, laureate of the FNP Prize in the chemical and material sciences, said, “I am a ‘child’ of the Foundation for Polish Science. In the course of 14 years I passed from the START programme for young researchers to the FNP Prize, with several other FNP programmes in between. I am very grateful to everyone who helped me on this path, and thanks to whom I am here today. Science is the love of my life.”

Prof. Andrzej Kossakowski, winner of the FNP Prize in the mathematical, physical and engineering sciences, said: “I would like to thank FNP for such a high and unexpected honour. During my scientific work I have had the good fortune to do what I love and meet many wonderful people.”

According to Prof. Andrzej Wiśniewski, laureate of the FNP Prize in the humanities and social sciences, “Polish logic has prospered for over a century. What does it mean to say that it is ‘Polish’? It certainly doesn’t mean that it is special in some way. It simply means that if certain findings had not been made in Poland, before the war and later, then certain theories would not exist, or would be different. To this day, it is some sense convenient to be a Polish logician. I’m pleased that on the occasion of this meeting I could say something about logic, a field to which I have made my own modest contribution.”

Speaking at the ceremony, Deputy Prime Minister and Minister of Science and Higher Education Dr Jarosław Gowin said: “I warmly congratulate the professors who have won this most distinguished award. I would also like to congratulate the Foundation for Polish Science, which for so many years has strived to raise and promote a high standard for scientific excellence in Poland. I would like to point out that to some extent, my work over the past four years as minister has been conceived as an attempt to create a systematic framework for supporting the approach to science which FNP has represented from its very beginnings.”

The ceremony at the Royal Castle brought together a large group of state and academic authorities and representatives of the scientific community.

The gala was graced by a performance by young artists Konstancja Śmietańska, winner of a scholarship from the Polish Children’s Fund, and Zuzanna Konstantynowicz, of the Sonata in C minor G2 for cello and basso continuo by Luigi Boccherini.

Letters to the laureates and participants in the gala were submitted by Senate Speaker Prof. Tomasz Grodzki and Prime Minister of Poland Mateusz Morawiecki.

The FNP Prizes have been awarded since 1992 for outstanding scientific achievements and discoveries. They are individual prizes given in four fields: life and earth sciences (this award was not given this year); chemical and material sciences; mathematical, physical and engineering sciences; and humanities and social sciences. The laureates are chosen through a competition. Candidates for the competition may be nominated by distinguished scientists personally invited by the Foundation’s Executive Board and Council. The FNP Council serves as the competition committee and selects the laureates on the basis of opinions from independent experts and reviewers—mainly from abroad—assessing the candidates’ achievements.

Prof. Marcin Drąg from the Faculty of Chemistry at the Wrocław University of Science and Technology received the 2019 Foundation for Polish Science Prize in the chemical and material sciences for developing a new technological platform for obtaining biologically active compounds, in particular proteolytic enzymes inhibitors. This platform may be used to develop new therapies, drugs, and diagnostic methods.

Prof. Andrzej Kossakowski from the Institute of Physics at Nicolaus Copernicus University in Toruń received the 2019 Foundation for Polish Science Prize in the mathematical, physical and engineering sciences for developing of the theory of open quantum systems. This theory serves as the foundation for what is currently one of the most intensively developing fields of science: quantum information theory.

Prof. Andrzej Wiśniewski from the Faculty of Psychology and Cognitive Science at Adam Mickiewicz University in Poznań received the 2019 Foundation for Polish Science Prize in the humanities and social sciences for developing the concept of inferential erotetic logic. The solutions proposed by Prof. Wiśniewski may find application in such areas as machine learning, the development of artificial intelligence, improvement in internet search engines, and efficient analysis of databases.

The members of the Foundation Council for the current term are professors: