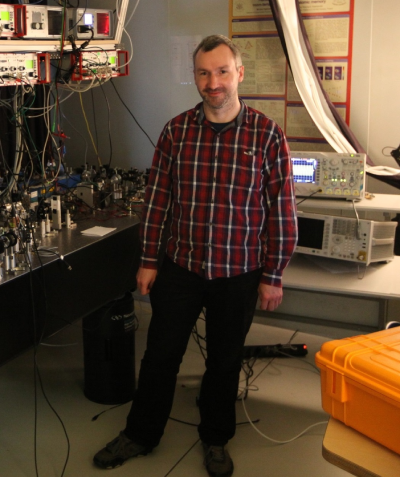 Prof. Wojciech Wasilewski from the Centre for Quantum Optical Technologies, IRAP Centre of Excellence operating within CeNT UW (Centre of New Technologies – University of Warsaw) is the first Pole who has received the prestigious ICO Prize. The prize is granted in recognition of outstanding achievements and contribution to the development of optics.

The prize was established in 1982 to honour outstanding scholars under 40. 36 scholars from around the world have made it to the prize-winner list so far. A Polish scientist joined this distinguished group.

Prof. Wojciech Wasilewski received the 2020 ICO Prize for “seminal contributions to experimental work in the field of multi-mode quantum memories, demonstrating systems with both outstanding storage capacity and remarkably extensive range of operations”.  “Our memories allow the storage of over thousand channels, which can be repositioned and subjected to mutual interference” – explained the prize-winner.

“We are proud that this prestigious prize was awarded to a Polish scientist for the first time. We are also happy that this scholar is working at the IRAP Centre of Excellence established thanks to the funds provided by the Foundation for Polish Science. This means that the research we are financing have reached a world-class level, and is carried out by internationally-renowned scholars” – said Prof. Maciej Żylicz, President of the Foundation for Polish Science.

“The prize is a tangible proof that Prof. Konrad Banaszek, Head of the Centre for Quantum Optical Technologies, is extremely effective in his operations. Thanks to his continuous support he has been providing for many years now, in organisational, financial and conceptual terms, I was able to collect the equipment and bring together a team of extremely talented young people who have made top level research possible. The works which have been distinguished are the outcome of over ten years of research conducted exclusively by my group. Young scholars who received the START FNP scholarship, Radosław Chrapkiewicz, Michał Dąbrowski and Michał Parniak-Niedojadło, were also engaged in the project. I hope that the prize will have a positive influence on our capabilities for creating the best possible conditions for the development of young people, undergraduate, graduate and doctoral students alike, as well as of those who decided to work in the country after completing internships in top research centres abroad,” said Prof. Wasilewski.

Prof. Wojciech Wasilewski specializes in quantum physics and for many years works at the Faculty of Physics at the University of Warsaw. He is the founder and head of the Quantum Memories Laboratory, which operates within the Centre for Quantum Optical Technologies, a center of excellence within the scope of International Research Agendas (MAB).

For more information on

The picture shows a low-temperature ensemble of atoms where quantum information is stored.  In the frame, a temporal sequence of ultra-narrowband Fourier transform.