New Solutions for the VLC Technology 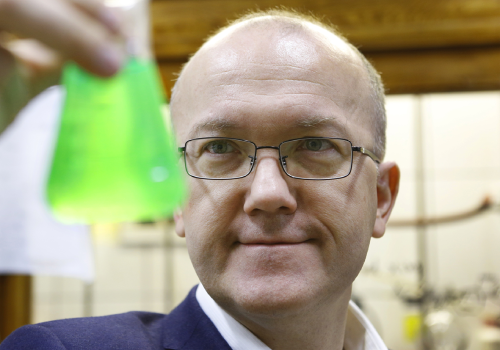 Professor Daniel T. Gryko, together with researchers from the Institute of Organic Chemistry of the Polish Academy of Sciences and physicists from the United Kingdom and Italy, devised new OLED diodes that can contribute to the development of visible light communication (VLC) technology for data transmission. The results of the research are described in the journal Light Science and Applications, which belongs to the Nature Publishing Group. This is only the second publication with Polish affiliation to be published in this magazine since its foundation in 2012.

VLC is a wireless method that uses the light emitted by LEDs for data transmission. The light emitted by standard LED luminaires is modulated to send data at such a high speed that the human eye cannot see the light changes. VLC technology can be used as a stand-alone solution or as a complement to radio or cellular communication. VLC has an advantage over Wi-Fi because the transmission does not cause electromagnetic interference.

There are many possible applications of VLC technology. Many hopes it will support the Internet of Things market, i.e. the concept of equipping devices like telephones, motion sensors, cameras, or home appliances with the ability to connect to the Internet or other devices via wireless networks. However, until now, the problem in using VLC technology for communication between objects was the low depth of visible light penetration on opaque surfaces. One solution is to extend the operation to near-infrared (NIR, 700–1000 nm), thus enabling the use of VLC in photonic bioapplications, taking into account the NIR-translucency of biological tissues. 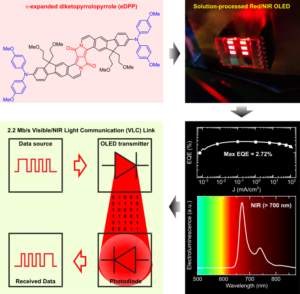 In cooperation with Prof. Franco Cacialli (London Center for Nanotechnology), Gryko has developed new OLED diodes that emit far-red/NIR light with an emission range of 650-800 nm. Such OLEDs are made of organic compounds and used as a surface light source. They are used to build flexible displays, TV sets, and other portable devices. Displays manufactured in OLED technology are extremely thin, as they need no backlighting because the diodes themselves generate light. A key achievement of the team of scientists was the development of very high-efficiency OLED diodes in the near-infrared range. Thanks to this, scientists were able to achieve a record speed of data transfer, which meets the requirements of the Internet of Things.

Daniel Gryko is the director of the Institute of Organic Chemistry of the Polish Academy of Sciences. His most important scientific interests include the chemistry of functional dyes, in particular corroles, i.e. macrocyclic dyes with numerous applications. He is the winner of the 2013 MASTER grant of the Foundation for Polish Science (FNP). He also twice received funding from the FNP TEAM program. In 2017, he was honored with the FNP Prize, recognized as the most important Polish scientific distinction.