The European Charter for Researchers and the Code of Conduct for the Recruitment of Researchers were adopted by the European Commission in 2005. These two documents contain recommendations defining the role, scope of responsibilities and rights of researchers as well as of their employers and funders.

The Charter& Code aims at creation of competitive and open research job market in Europe, enhancing attractiveness of the research career. It also serves increasing mobility of researchers, including exchange of people between academia and industry and other sectors of the economy.

The institutions which consciously and actively adapt their activities to the principles entailed in both documents are recognized by the European Commission and granted  “HR Excellence in Research” award. The Foundation for Polish Science has been the first organisation in Poland to be so distinguished.

In 2011 FNP president Maciej Żylicz signed a declaration of support for the European Charter for Researchers and the Code of Conduct for the Recruitment of Researchers. In the next step, the Foundation prepared an analysis of the compliance of its procedures and operations with the Commission’s guidelines, and on that basis drafted an action plan for achieving full implementation of the Charter and Code. After verifying these documents, on 25 June 2012 the European Commission awarded the Foundation the distinction of “HR Excellence in Research”.

As our programmes and procedures are changing and so does the institutional and legal framework of our activities, pursuance of the European Charter & Code is a constant process.  New gaps and challenges are being identified and new actions discussed.

Professor of physical metallurgy and materials science. His field is the relations between microstructure and mechanical properties of metals, with special interest in the structure of grain boundaries and properties of metals. Contributed over 70 papers in international journals, two monographs and two academic books.

1990-1994 a member of the Expert Group at the Ministry of Education. Elected in 1991 and again in 1994 to the State Committee for Scientific Research (KBN), he was Chairman of the Technical Science Group of the Fundamental Research Commission, and from 1994 to 1997 – Deputy Chairman of the Applied Research Commission. Since 2000 in the Professional Ethic Group of the Minister of Science and Technology.

Member of the Warsaw Scientific Society (1988), a corresponding member of the Polish Academy of Sciences (1991), and a member of The Society for the Advancement of Sciences (1993). Recipient of Knight (1989) and Officer (1997) Cross of the Polonia Restituta Order, and The National Education Medal (1995). Received dr h.c. from Academy of Mining and Metallurgy, Cracow (1999) and from Warsaw University of Technology (2001).

President and Executive Director of the Foundation for Polish Science from October 1992 till September 2005.

Funding for the purchase of specialist equipment

Winners of the FIRST TEAM and INTERNATIONAL RESEARCH AGENDAS programme competitions may now apply for funding for the purchase of specialist equipment at the research units where their projects are being carried out.

As part of the competition, funding will be provided for the purchase of specialist equipment, understood as a set of testing, measurement or laboratory devices with a low degree of universality and high technical parameters.

It is possible to purchase equipment necessary for the significant development of a project implemented under the FIRST TEAM or INTERNATIONAL RESEARCH AGENDAS programme and/or for the development of the R&D human resources engaged in the project, provided that the unit does not have any equipment that could be used as an alternative, and that gaining access to such equipment in another unit is impossible or unjustified from an economic point of view.

From 1 December 2017 heads of projects implemented under the TEAM, TEAM-TECH, core facility competitions, FIRST TEAM, HOMING, and POWROTY/REINTEGRATION programmes (Measure 4.4 of the Smart Growth Operational Programme) may submit applications to make changes in their projects.

The changes may include the adjustment of the scope of the project, as well as its prolongation. Such modifications, if substantively justified, may be connected with an appropriate increase in funding for the project.

The Foundation for Polish Science is implementing the SG OP Technical Assistance Project for the years 2017–2019 as part of the Smart Growth Operational Programme 2014–2020 co-financed from the funds of the European Regional Development Fund.

The project aims to provide the necessary support in the efforts undertaken by the Foundation for Polish Science with a view to carrying out projects within the SG OP 4th Priority Axis, Measure 4.3 “International Research Agendas” and Measure 4.4. “Increasing the Human Potential in the R&D sector”.

The funding received from the EU for the requirements of the project is PLN 17,941,560.

Reporting suspected financial irregularities and fraud in projects and competitions supervised by the Foundation for Polish Science (FNP) under the SGOP, Measure 4.4

The Foundation for Polish Science, which acts as the Implementing Authority for Measure 4.4 of the Smart Growth Operational Programme 2014-2020, undertakes to observe the highest legal and ethical standards, and to adhere to the principles of accuracy, objectivity and honesty. It is resolutely determined to prevent financial fraud, including corruption and conflicts of interest.

The obligation to adhere to the principles of legality, objectivity, responsibility and honesty also applies to SGOP project applicants and beneficiaries, as well as to their suppliers and partners.

The FNP has a system in place to report potential or suspected irregularities, or fraud, by email to zglosnaduzycie@fnp.org.pl.

Potential or suspected irregularities, or fraud, may be reported anonymously. However, the individual who is reporting may be asked to provide further information to help resolve the issue, and to identify himself or herself, and provide his or her contact details in cases involving information with personal data. We guarantee that all data are kept confidential.

The FNP has an anti-fraud policy in place as part of the Smart Growth Operational Programme 2014-2020 to resolutely and consistently counteract all cases of financial fraud with the support of relevant authorities and law-enforcement agencies.

2. Programmes financed by the European funds within the Measure 4.2 “Development of R&D system staff qualifications and improving the awareness of the role of science in economic growth” of the Human Capital Operational Programme

The SKILLS project encloses several trainings ran by the best specialists from Poland and abroad as well as the following programmes:

Since May, 26th 2014 the Foundation for Polish Science has been operating out of its new headquaters: ul. Krasickiego 20/22 in Warsaw.

The need for a move from the previous FNP headquarters to a new one arose as a result of the considerable development in the Foundation’s programme activity. Since 2008 the FNP has carried out several new programmes financed from European structural funds, and had to double its staff.  The previous building was too small to house all members of the staff, so in 2008 we purchased a real estate for office purposes at ul. Krasickiego 20/22. This comprised a ruined 1930s building surrounded with a garden, which had both certainly seen better days. During the II World War it suffered serious damage, and was not rebuilt following the original design. The Foundation acquired the building in a very bad condition. Having received the consent of the Warsaw Conservator of Listed Buildings, we got the go-ahead to rebuild and modernise the property.

It was our intention to create not only a functional place that would satisfy our office needs, but above all – a unique, visually attractive and environmentally friendly building that would both emphasise the prestige of the Foundation and Polish science and become a landmark of the district and city – an open place inspiring various communities.

In 2009 we announced a competition for developing an architectural conception for the modernisation and rebuilding of the building at ul. Krasickiego 20/22 to house the new FNP headquarters. The winner was FAAB Architektura. Building work began in autumn 2012.

The work  resulted in a modernised building redeveloped in accordance with the principles of ecological construction, based on revitalisation of existing building materials making maximum use of the old building’s structure, leaving those walls that were not rebuilt after the war and whose technical condition permits their preservation. However, during building work it became clear that, for example, the part of the elevation reconstructed after the war does not meet building norms and was in danger of collapse. Following the renovation the building comprises four floors with office space of 1527m2. The modernised building returned to the original, pre-war order of the front elevation, with a street entrance and an original terrazzo stairwell. The revitalised building features modern ecological technological solutions, including a rational management system for water and electric energy. The property has been made more attractive by its “living façade”, i.e. a vertical garden installed on the front elevation.

Solutions used in the building:

The Foundation for Polish Science (FNP) seeks to take an active part in creating best practices for the professional ethics of scientists conducting research in Poland, and to contribute to development of rules and experience in the area of the ethical standards that should be applied in Polish scientific institutions. Thus, in the form of codes, the Foundation defines the rules and values governing its staff, as well as the beneficiaries, candidates and reviewers in the competitions the Foundation conducts:

The members of the

The Ethics and Good Practice Commission are:

Under the Rules of Procedure, any person in possession of information concerning a possible violation of the Foundation’s ethical rules may notify the Foundation accordingly (while the Foundation’s staff and experts have an obligation to do so). Notifications should be submitted to etyka@fnp.org.pl.

The Foundation supports the development of scientists and enables them to fully exploit their abilities and research interests. Therefore, work for a diverse scientific community – based both on gender and other personal characteristics – is also work for the improvement of science’s quality. We know that ensuring real equality of opportunity for groups at risk of discrimination in the development of scientific careers is difficult due to structurally and historically established barriers. However, this does not relieve us of the responsibility for co-creating academic culture and supporting the best scientists. 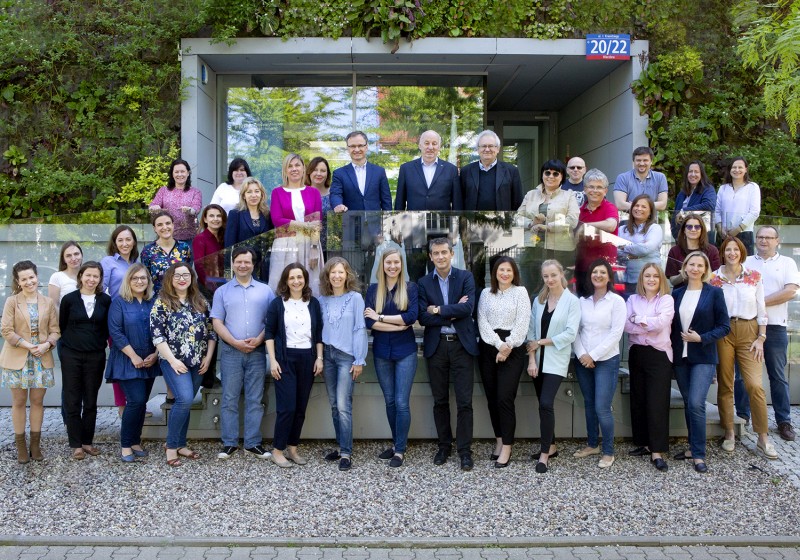 How Do We Use Evaluation?

Principles for evaluation of FNP programmes

Because of the scale of the Foundation’s activity and its importance for the whole of Polish system of funding science, its programmes must be subjected to systematic evaluation. Evaluation serves to analyse the purposefulness, quality and results of the programmes being run, thus also supporting the process of building FNP’s programme strategy.

After the completion of an edition of a programme or a significant stage thereof, a review is made of its progress, the results and any problems encountered. Any doubts, remarks and suggestions for the future are then formulated.

Each of the Foundation’s programmes is subjected to internal evaluation every 4–5 years. The purpose of this is to make a careful analysis of the purposefulness and quality of activities undertaken, to identify critical points and to make recommendations for the future.

An objective assessment of the FNP’s programmes is to be ensured by entrusting the task to outside experts – persons independent of the Foundation and recognized as authorities in the scientific community. The purpose of external evaluation is to evaluate the programmes offered by FNP in terms of the Foundation’s role and mission, the needs of the scientific community, the international perspective and the standards of the best foreign institutions financing the development of science.