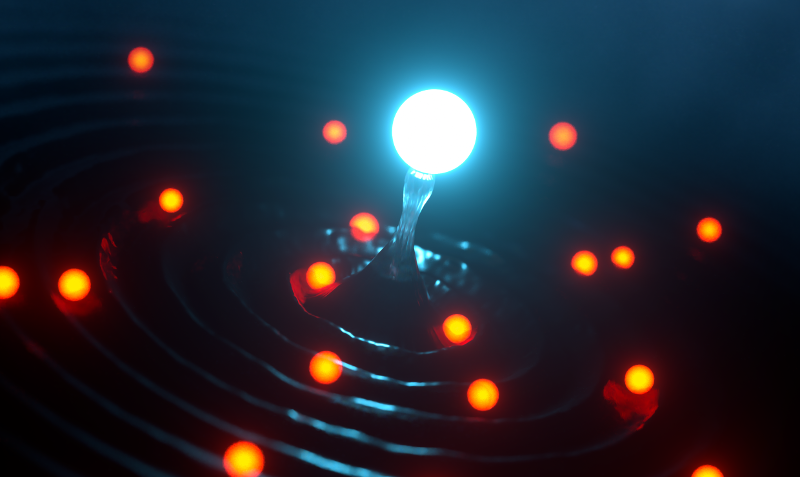 Scientists from the Faculty of Physics at the University of Warsaw and the University of Freiburg have observed Feshbach resonances for the first time, and explained resonances between a single ion and ultracold atoms. An article with a summary of the results of the research has appeared in a scientific journal “Nature”. The article was given extra attention and information was placed on the cover of the journal that it was the most important paper in that issue. The works were co-financed by the FNP (Foundation For Polish Science) with the funds from the Intelligent Development Operational Programme.

The research was conducted by dr hab. Michal Tomza, the winner of the START, HOMING, and FIRST TEAM programmes, a doctoral student Dariusz Wiater, an MA student Agata Wojciechowska, dr Krzysztof Jachymski, the winner of the START programme, from the Institute of Theoretical Physics, the Faculty of Physics at the University of Warsaw, and an experimental group managed by prof. Tobias Schaetz from the University of Freiburg in Germany.

The world is of a quantum nature which we do not observe on a daily basis. To reveal that nature, a significant reduction in temperature is necessary as it allows phenomena such as superfluidity and superconductivity to occur. Good examples of quantum matter are also ultracold gases of atoms cooled to a fraction of a degree above absolute zero. Under such conditions, interactions between atoms can be controlled by electromagnetic fields, using the phenomenon of Feshbach resonance. Magnetic Feshbach resonances significantly increase the frequency of collision at the time when the energy of the molecular states is adjusted to the energy of the colliding atoms. For the first time ever, the Polish and German researchers have managed to observe and explain such resonances between a single ion and ultracold atoms.

In the experiment, resonances were observed as an increase in the probability of losing an ion as a result of interaction with pairs of atoms for specific values of the magnetic field. The researchers were also able to demonstrate an increase in the frequency of two-body collisions in the vicinity of resonance, allowing the ion to be cooled efficiently. The theoretical analysis allowed determining interaction parameters, which were previously unknown, and also allowed predicting the positions of resonances, which were not initially detected in the experiment.

There are many potential applications of ultracold ion-atom systems, such as quantum computing and simulations, however, they require much lower temperatures than the gases of neutral atoms. Several experimental groups have been working on this success for years with the support of computing, i.a., physicists from Warsaw. The results pave the way for the next generation of experiments, in which the quantum state of an ion will be much easier to control. The lower energy and longer lifetime of an ion will make it possible to analyse new phenomena and produce new interesting states of quantum matter which, on the one hand, will help to understand the quantum nature of the world in a better way and, on the other hand, will become another element of the emerging quantum technologies. It can be expected that Feshbach resonances between an ion and atoms will also be observed for other combinations of elements very soon.

The research presented in the paper was co-financed by the project “Quantum engineering of novel ultracold complex molecular systems: from diatomic to polyatomic molecules” carried out by dr Tomza under the FIRST TEAM grant programme of the Foundation for Polish Science.

FIRST TEAM grant programme is implemented by the Foundation for Polish Science and it is financed by the EU funds from the European Regional Development Fund under the Smart Growth Operational Programme, Axis 8: Improvement of the scientific and research potential, Measure 4.4 Increasing the human potential in R&D sector.