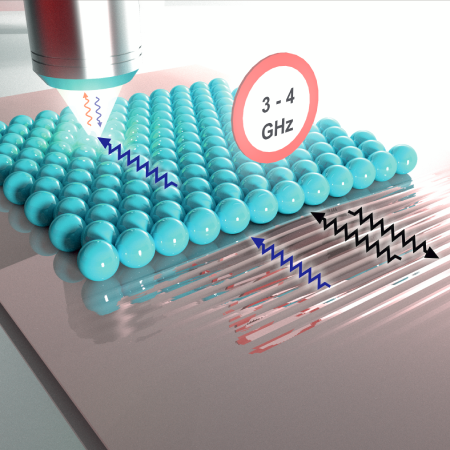 Dr hab. Bartłomiej Graczykowski, the laureate of the HOMING and FIRST TEAM programmes of the Foundation for Polish Science, constructs nanostructures in which sound and heat flow in a strictly controlled manner. These structures potentially have many different practical applications, for example, they can be used for the rapid transmission of huge amounts of information or for the direct conversion of heat into electricity. Dr Graczykowski’s results were published this year in two prestigious journals Nano Letters and Nano Energy.

The paper published in Nano Letters concerns the control of sound flow in nanostructures and new possibilities in the field of acoustic wave filtering. “The flow of high-frequency audio signals through nanocrystals is of great importance for further development of mobile telephony and wireless connectivity. The successor to 5G technology, which will be based on signal processing at frequencies around several hundred Gigahertz, will require further miniaturisation or a completely new device design. In our publication, we propose a multiband acoustic filter which is a composite of a thin (50 nanometre thick) silicon nitride membrane and a two-dimensional network of self-organised nanoparticles. Such a structure is produced from commercially available materials in a simple way. Importantly, we were able to investigate and describe three interrelated mechanisms responsible for filtering acoustic signals. Two of them have been known before – they are related to the arrangement of individual components of the system in terms of size and natural vibrations. The third mechanism, which we described for the first time, is related to adhesion, i.e. specific interactions between the surfaces of elements of this system that are adjacent to one another. To describe this mechanism, we used quite extraordinary optical techniques, in which we used unique equipment financed by the Foundation for Polish Science,” says dr Bartłomiej Graczykowski from the Faculty of Physics, the Adam Mickiewicz University in Poznań.

The second area of interest of Poznań-based physicists is heat flow. Mechanical waves are responsible for both the flow of the sound and heat, but heat is a form of energy that is much more difficult to harness. “Materials with the ability to convert electricity into a heat gradient (which is the case, for example, in camping refrigerators) or vice versa – heat into electricity – are called thermoelectric materials. The ability to generate electricity from heat can be of great importance, considering that almost all devices (such as computers or mobile phones) generate process heat and it is usually waste heat. Currently, the most efficient thermoelectric modules are made of toxic materials and their storage after use is a considerable problem. We believe that non-toxic and easy-to-process silicon could be used to build thermoelectric modules. Unfortunately, silicon has a high thermal conductivity, which prevents it from being a good thermoelectric material. That is why we set ourselves the goal of reducing the thermal conductivity of silicon as much as possible, while maintaining its electrical conductivity”- explains dr Bartłomiej Graczykowski.

The effect of scientists’ work on gaining control over heat flow is a thermal diode constructed by them and presented in the publication in Nano Energy. It is a device that transfers more heat into one direction than into the other. “We have created a nanostructure in which the symmetry of heat transport has been broken. This device is made entirely of silicon and can be integrated with everyday electronics. It can be used for the effective removal of process heat, passive cooling or for the construction of thermal valves”- says dr Graczykowski.

Phononics – the science of many possibilities

Research by Bartłomiej Graczykowski’s team is part of the rapidly developing branch of nanotechnology – nanophonics. It is the study of phonons, or quanta of the acoustic field, in systems ranging in size from a few to several hundred nanometers. More information about the achievements of Poznań-based scientists in the field of nanophonics can be found in an overview study published by them in the Advanced Functional Materials journal in 2019.

The HOMING programme is implemented by the Foundation for Polish Science, and is financed from the European Regional Development Fund under the Smart Growth Operational Programme, Axis IV: Increasing the research potential, Measure 4.4 Increasing the human potential in the R&D sector.

The FIRST TEAM programme is implemented by the Foundation for Polish Science, and is financed from the European Regional Development Fund under the Smart Growth Operational Programme, Axis IV: Increasing the research potential, Measure 4.4 Increasing the human potential in the R&D sector.