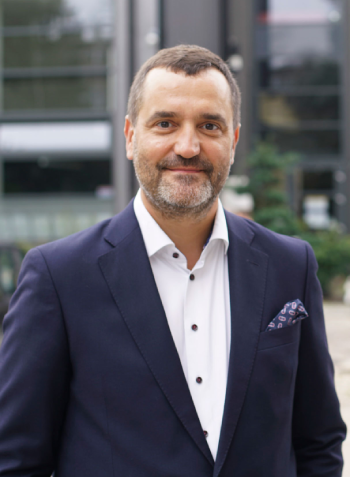 Born in 1975, Garstecki graduated physics at the School of Exact Sciences in Warsaw in 1998; Ph.D. in chemistry at the Institute of Physical Chemistry of the Polish Academy of Sciences in 2002; research internship in 2002–2005 at the Faculty of Chemistry at Harvard University led by the eminent chemist Professor George Whitesides; obtained the title of professor in 2014.

Since 2006, Garstecki leads the Microfluidics and Complex Fluids Research Group at the Institute of Physical Chemistry of the Polish Academy of Sciences, which conducts research on the development of new microfluidic techniques for the purposes of chemistry, biochemistry, and microbiology, with particular emphasis on the ultrafast finding of optimal conditions for chemical synthesis, determination of antibiotic resistance of bacteria, and the creation of solutions applicable in modern medical diagnostics.

Garstecki is a mentor and educator of the next generation of scientists as the co-organizer of the “Droga na Harvard” competition (Road to Harvard) as part of the Harvard Club of Poland and as the promoter of several doctoral dissertations. Co-author of about 150 scientific publications, including Physical Review Letters, Lab on a Chip, Analytical Chemistry, Angewandte Chemie International Edition, Science, Nature, Nature Physics. Co-author of over 100 patent applications and several dozen patents granted in Europe, the USA, and Asia. Member of the Editorial Committee of the peer-reviewed scientific journal Lab on a Chip, published by the Royal Society of Chemistry; he is often invited to give keynote lectures by international scientific societies.

Winner of numerous awards, including “For the Merit of Inventions” awarded by the Prime Minister of Poland (2019), Prof. Kazimierz Bartel Prize (2018), the “Very Important Polish Innovator” Award by the “Teraz Polska” Foundation (2015), the Knight’s Cross of the Order of Polonia Restituta (2013), the W. Kołos Prize awarded by the Polish Academy of Sciences (2005), and Prime Minister Prizes for the best doctoral dissertation and habilitation. Moreover, Garstecki won many grants awarded by Polish and international institutions, including the prestigious ERC Starting Grant of the European Research Council and EIC SME, a grant from the European Innovation Council. He is multiple laureate of competitions by the Foundation for Polish Science, including MISTRZ, POWROTY/HOMING, TEAM, and TEAM-TECH. Garstecki is an independent expert of the European Commission.

As the founder and president of Scope Fluidics – established in 2010 as the first spin-off of the Institute of Physical Chemistry of the Polish Academy of Sciences – he orients the company from the very beginning toward creating innovative solutions for the needs of medical diagnostics. Garstecki is a link between the worlds of business and science, improving the cooperation of both environments, and combining viewpoints. In 2012, Scope Fluidics established its first special purpose vehicle, Curiosity Diagnostics, to create a point-of-care system offering the world’s fastest detection of bacteria and viruses. In 2017, the Scope Fluidics group established another special purpose vehicle, BacterOMIC, which is developing the world’s first fully comprehensive antibiotic susceptibility test.

Garstecki is a member of the FNP Council since September 1, 2020.