Quantum memory as an optical temporal telescope with an unprecedented resolution 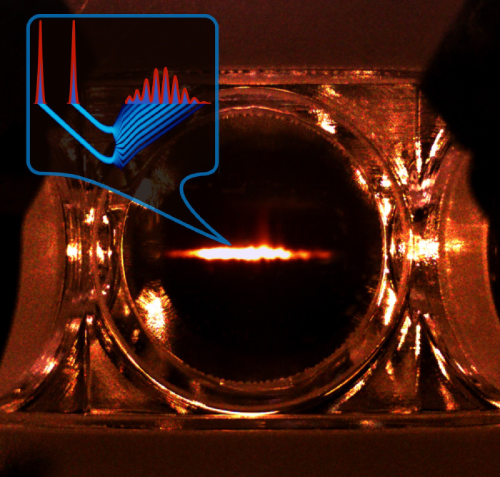 Led by dr hab. Wojciech Wasilewski from the Centre for Quantum Optical Technologies (QOT) – an IRAP centre of excellence – doctoral students at the Faculty of Physics of the University of Warsaw have designed and tested an optical temporal telescope which gathers signals for several dozens of microseconds, an unprecedented amount of time.

A temporal telescope is a special optical device which allows the simultaneous reception and analysis of many close optical frequency ranges (channels). The device makes it possible to resolve optical signals with frequencies as close as UKF FM (0.1 MHz). Other temporal telescopes developed so far provide a resolution one million times lower and are adapted to broadband signals emitted by optical devices based primarily on solids. The telescope developed at the University of Warsaw operates in an entirely different regime, being able to register signals emitted by systems based on, for instance, atomic gases, single ions and the recently expanding optomechanical systems. This was not possible until recently. Also, the device is a thousand times more powerful than optical spectrometers, which are usually incapable of receiving more than one channel. Notably, achieving such a large resolution with conventional methods would require the use of about 10^12 km of optical fibre, which is about 1/10 of the light year.

These impressive outcomes have been achieved by appropriately programming the quantum memory designed by the University of Warsaw scientists. They began by analysing the working principles common to a multichannel radio and an optical telescope, as both are based on the Fourier transform, although in completely different frequency ranges. Many widely available devices visualise the musical spectrum when playing music, where the bars representing the strength of individual acoustic wave frequencies are computed using the Fourier transform. It works both ways – we can decompose sounds into constituent tones or create chords from individual tones to imitate the sound of the piano. Musicians have long ago used the Fourier transform to teach the electric piano to speak (vide: https://youtu.be/-6e2c0v4sBM).

The approach to obtaining the optical signal Fourier transform demonstrated in the device is also reversible. As a result, individual channels are completely independent, which is important in some communication protocols using multiple channels at the same time. The unique system developed by the University of Warsaw scientists can be used as a receiver in quantum information protocols – for instance, in quantum cryptography, where the use of multiple channels increases the transmission rate. Other potential application involves data reception from very remote satellites sending optical signals. With its extraordinary parameters, the receiver could be used to implement highly sophisticated optical coding systems recently proposed by theoreticians. This, too, could significantly increase the rate at which the coded information is received.

The device was developed at the Quantum Memory Laboratory by two doctoral students, one master’s student and one recently graduated doctor, with support from the Head of the Laboratory, using globally unprecedented quantum memory designed entirely at the University of Warsaw. The team has also been assisted by two electronics students. It was a concerted and strenuous effort of the whole team involving an upgrade of the optical system, a high-precision verification of sub-assembly interaction through a range of test measurements, the devising of a new-experiment concept through theoretical simulations, the adjustment of parameters to the actual experiment, the search for a regime in which the new system worked optimally, and final measurements and plotting the results in a synthetic form corresponding to theoretical models. With the system being unlike any other previously known, all team members had to demonstrate great creativity. In the process they gained unique and extensive experience in quantum optics, electronics, programming and a range of other fields.

The Centre for Quantum Optical Technologies (QOT) has been established at the University of Warsaw through a grant of more than PLN 34 million awarded by the Foundation for Polish Science as part of the International Research Agendas Programme (IRAP) using Smart Growth Operational Programme (SGOP) funds.

The picture (photo by Mateusz Mazelanik, Faculty of Physics, University of Warsaw) shows clouds of Rubidium-87 atoms, which are the essential components of the quantum memory used to demonstrate the temporal telescope with an unprecedented resolution. The inserted graphic shows an example of the result of an experiment with two short impulses on the telescope input (left part) whose Fourier transform is the comb seen on the output (right part).