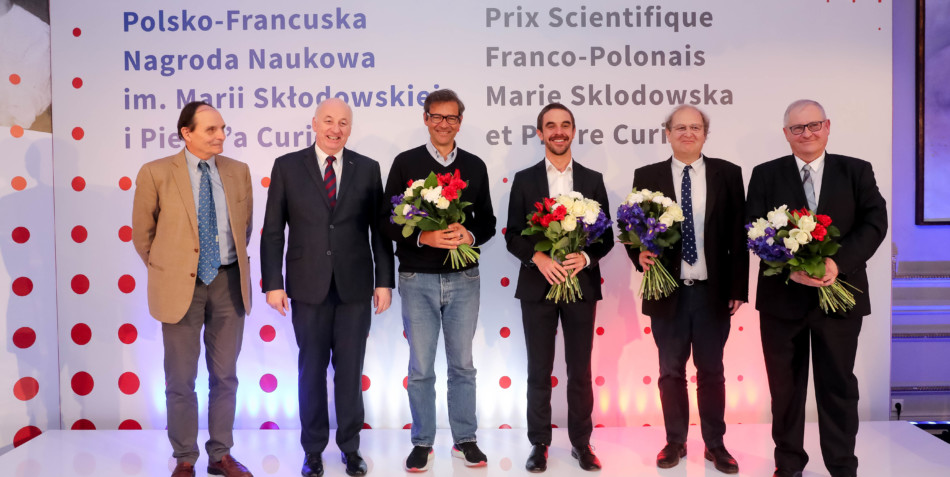 The award was given for outstanding scientific achievements resulting from cooperation between scientists from Poland and France. Cognitive scientist Marcin Szwed from the Institute of Psychology at Jagiellonian University and neurologist Laurent Cohen from the Brain & Spine Institute (Institut du Cerveau et de la Moelle épinière—ICM) were recognized for innovative research on the processes occurring in the brain when reading. Physicists Jakub Zakrzewski from the Faculty of Physics, Astronomy and Applied Computer Science at Jagiellonian University and Dominique Delande from the French National Centre for Scientific Research (CNRS) received the award for achievements in the physics of quantum mechanical systems.

The Polish–French Science Award was established in 2019 by the Foundation for Polish Science (FNP), the French Ministry of Higher Education, Research and Innovation (MESRI), and the French Academy of Sciences to mark the Polish–French Year of Science. The aim of the award is to support and promote Polish–French scientific cooperation. The award was given through a competition in which there were 51 nominations. The laureates were selected by an award committee composed of outstanding scholars from France and Poland appointed by the Foundation for Polish Science and the French Academy of Sciences. The award carries a prize of EUR 15,000 for each laureate.

The ceremony at the Sobański Palace in Warsaw was attended by representatives of the scientific community, scientific and state institutions, organizations and firms. The laureates were congratulated by Dr Jarosław Gowin, Polish Deputy Prime Minister and Minister of Science and Higher Education, and by French Ambassador to Poland Dr Frédéric Billet and Dr Alina Toader from the French Ministry of Higher Education, Research and Innovation. Tributes to the laureates were delivered by professors of the French Academy of Sciences Claude Debru and Édouard Brézin.

Prof. Jakub Zakrzewski and Dr Dominique Delande, honoured for their research in the physics of quantum mechanical systems, began their scientific cooperation in 1991. Over 28 years they managed to build a model system for long-term cooperation between Polish and French research teams, contributing to the creation of a prolific Polish–French school in the theory of the quantum physics of chaotic and/or disordered systems. The achievements of the duo of Zakrzewski–Delande involve phenomena triggered by disorder in low-temperature ensembles of atoms at dimensions relevant for experiments and future quantum technologies. This research is theoretical and computational, focussing on realistic quantum systems combined with experimental groups. The understanding of fundamental microscopic processes occurring in quantum systems is hugely important for rapid development of quantum technologies. The research has resulted in 36 joint publications, including seven articles in the prestigious journal Physical Review Letters.

Through their cooperation since 2007, Dr Marcin Szwed and Prof. Laurent Cohen have demonstrated that groups of neurons in the visual cortex appear to specialize in reading text, and that this phenomenon does not depend on the culture or the writing system. Experiments by the pair of scientists showed that in blind persons, reading using the Braille alphabet stimulates the same visual fields as reading by sighted persons. This was a breakthrough, as it turned out that the cortical specialization of the brain arises from the specific nature of the task: the visual portion of the brain’s cortex learned to read Braille even though it might be expected that this task would be assumed by the tactile portion. The experiment showed that the brain is more flexible than scientists had previously assumed, and the areas of the cortex responsible for sight or hearing can adapt to receive information from other senses. The results of the research have been described in seven scientific articles.