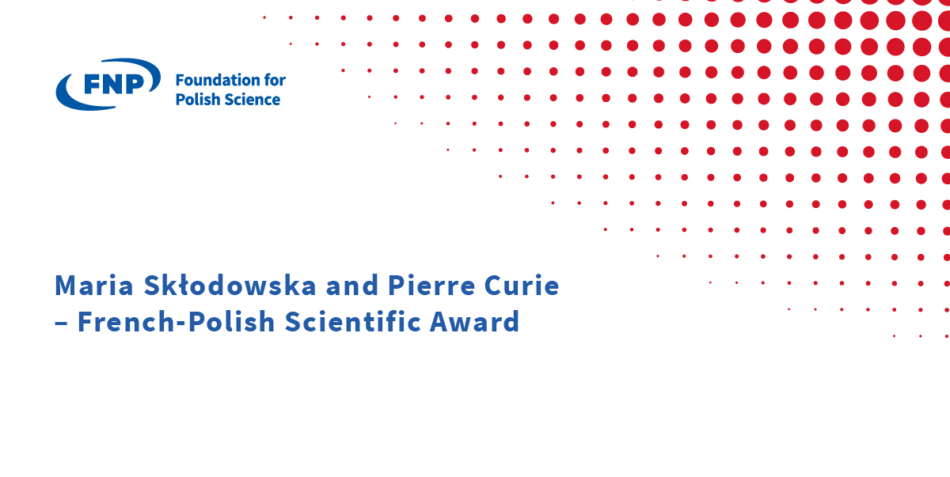 For Polish scientists, international cooperation is an opportunity to exchange experiences and knowledge, broaden their perspectives, secure larger funding, and commercialize research results more quickly. Polish researchers – particularly physicists, mathematicians, and biologists – develop Polish-French collaboration for many years. The Maria Skłodowska and Pierre Curie Polish-French Scientific Award, granted for the first time, testifies to the potential of this collaboration. The prize went to two Polish-French research teams for their years-long research, which resulted in influential scientific publications, among other achievements.

“It is essential for Polish scientists to work with foreign researchers and universities. Such collaboration results in publications of the highest standard and builds the foundations of the scientific community. What destroys this community, often also in Poland, is the competition for grants from various institutions. In many cases, we should cooperate instead,” emphasizes Prof. Maciej Żylicz, Foundation for Polish Science (FNP) Chairman, in his conversation with the Newseria Biznes agency.

Żylicz emphasizes that Polish scientists – especially physicists, mathematicians, and biologists – collaborate with all key international research centers and publish results of their work, which translates into more than just international renown. Of course, there are cultural and communicational differences between researchers of various nationalities, further complicated by the resignation from competition and the differences in standards and scientific documentation. Still, such collaboration provides scientists with an opportunity to exchange experiences and knowledge, broaden their perspectives, secure larger funding, and commercialize research results more quickly.

“Publications that result from scientific collaboration are better known worldwide, which benefits virtually everyone,” says Żylicz. “Publishing high-quality works noticed by the scientific community is best achieved through cooperation.”

“International cooperation always produces synergy effects. As researchers from diverse communities, we have different training and backgrounds, differing perceptions of reality. Such exchanges enrich, develop, and facilitate our scientific activity,” adds Prof. Jakub Zakrzewski from the Faculty of Physics, Astronomy, and Applied Computer Science of the Jagiellonian University.

The Foundation for Polish Science also contributes to the development of the Polish-French cooperation. The International Research Agendas Program by the FNP, supported by the European Commission, establishes Polish “centers of excellence:” specialized units that conduct interdisciplinary research in international teams, with the help of leading European research institutions and agencies. FNP already launched 14 such units, three in cooperation with French research centers.

“For many years, Polish-French collaboration has been the most advanced in the field of physics; however, we can see that it also flourishes in other exact sciences and the humanities. One example is the Polish Institute in Paris founded in the nineteenth century, which operates and develops to this day,” says Zakrzewski.

The Maria Skłodowska and Pierre Curie Polish-French Scientific Award, granted in 2020 for the first time, proves the strength of the Polish-French scientific collaboration and shows that it has the potential for further development. The Award was established in 2019 by the Foundation for Polish Science and the French Academy of Sciences with the French Ministry of Higher Education, Research, and Innovation to mark the Polish-French Year of Science. It aims to support and promote Polish-French scientific collaboration. The winners, who will receive an award of EUR 15,000 each, were selected through an open nomination process.

“This scientific award constitutes the crowning achievement of our cooperation. Many of us successfully collaborate with French research centers. Moreover, we secure funding for further collaboration. Thanks to our efforts, Polish students and graduate students have an opportunity to visit France, and French scientists can come to Poland. This is the way to create an international community,” says Żylicz.

This year, two research teams received the Award. The first team is composed of Dr. Marcin Szwed (The Institute of Psychology of the Jagiellonian University) and the neurologist Prof. Laurent Cohen (Paris Brain Institute), who collaborate since 2007. The two scientists were distinguished for their innovative studies into brain processes during reading. Their experiments showed that reading Braille activates in blind persons the same visual areas as in non-visually impaired subjects. Szwed and Cohen proved that the brain’s cortical specialization depends on the task at hand; instead of the tactile area of the cerebral cortex, it was the visual area that learned to read Braille.

The experiment demonstrated that the brain has far greater plasticity than previously thought as the cerebral cortex areas responsible for sight or hearing can begin to process stimuli usually related to other senses. The research results are described in seven articles.

“I consider working with Marcin Szwed to be a very positive experience. I am sure we will continue our collaboration, as it follows the tradition of Polish-French cultural cooperation. Poland and France are countries with a long intellectual and scientific history, so we should keep on working together,” says Prof. Laurent Cohen.

The second awarded team is composed of two physicists: Prof. Jakub Zakrzewski (Faculty of Physics, Astronomy, and Applied Computer Science of the Jagiellonian University) and Dr. Dominique Delande (The French National Center for Scientific Research, CNRS), who collaborate since 1995. They received the award for their achievements in the physics of quantum-mechanical systems. Understanding the basic microscopic processes in these systems is fundamental for the rapid development of quantum technologies. Over 28 years, the two scientists built an exemplary system of cooperation between Polish and French research groups. Their research resulted in 36 joint publications, 7 published in the high-ranking scientific journal Physical Review Letters.

“We received as many as 51 nominations, despite the short application period. A considerable number of applications met our criteria, which proves the years-long, informal, grass-roots character of Polish-French cooperation, stimulated by friendship and scientific curiosity. I believe this is the way to conduct real science,” says Żylicz.