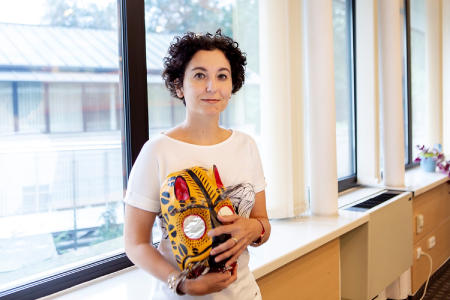 FNP programme laureate Justyna Olko, PhD Hab.,  from the Faculty of Artes Liberales at the University of Warsaw is one of the winners of the Falling Walls 2020 competition in the field of humanities and social sciences. The competition was held as part of the World Science Summit / Berlin Science Week organised by the Falling Walls Foundation.

She was recognised for “breaking the walls between academia and local communities to promote language diversity”.

Candidates were submitted by leading research institutions from all over the world. A total of 940 nominees from 111 countries were selected. Led by Professor Helga Nowotny, the President of the European Research Council (ERC), the jury chose 100 projects from 10 categories to compete in the final round. Justyna Olko , PhD Hab., received her award for, among other achievements, her studies as part of the “Language as a Cure” project, financed by the Foundation for Polish Science as part of FNP’s EU-funded TEAM Grant under the Smart Growth Operational Programme (SGOP).

Justyna Olko, PhD Hab., is a historian and ethnologist. She earned her degree of Doctor of Humanities from the Faculty of History of the University of Warsaw, and she defended her habilitation dissertation at the Faculty of History of the Adam Mickiewicz University in Poznań. Ms. Olko specialises in ethnohistory, anthropology and Mesoamerican sociolinguistics, her main focus being the culture and language of the Nahua Indians. She has been committed to reviving endangered languages of ethnic minorities. Ms. Olko has authored several books and completed multiple scholarship programmes at Dumbarton Oaks (Harvard University), John Carter Brown Library (Brown University), the Starting Grant European Research Council, Twinning (a European Commission programme), Focus, Focus Bis and FNP’s TEAM. She holds the Knight’s Cross of the Order of Polonia Restituta and has been recognised by the Burger Fellowship Academia Europea.