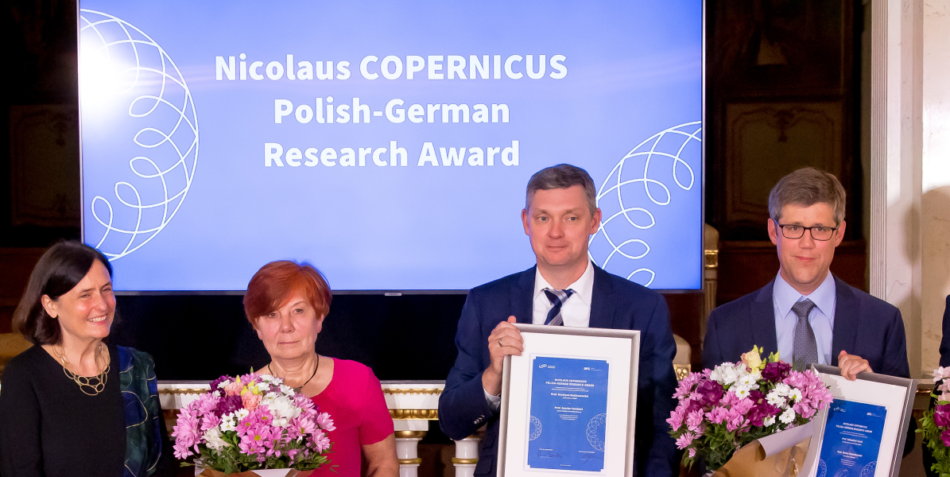 During the ceremony in Royal Baths Park, the prize was awarded by Prof. Katja Becker, President of the DFG, and Prof. Maciej Żylicz, President of the FNP. The ceremony was honored by the presence of His Excellency Dr. Arndt Freytag von Loringhoven, Ambassador of the Federal Republic of Germany to Poland, who in his speech congratulated the winners and emphasized the importance of scientific cooperation between Germany and Poland and its further development. The event gathered numerous representatives of the Polish and German scientific community, along with the winners’ colleagues and families. The ceremony was hosted by Piotr Krasnowolski.

Watch the broadcast of the event:

The COPERNICUS Award has been awarded since 2006. The prize is awarded every two years to a pair of cooperating outstanding scientists, one from Poland and one from Germany who conduct joint research. Thanks to the COPERNICUS Award, the organizers support and promote Polish-German scientific cooperation and the resulting exceptional achievements.

The winners are selected in a competition by a jury composed of scientists representing the Polish and German scientific communities. The amount of the award is EUR 200,000, granted in equal parts by both organizations. Each winner receives half of the sum and may use it for further scientific research and the strengthening of Polish-German cooperation.

Winners of the COPERNICUS 2022 Award

Prof. Krystyna Radziszewska and Prof. Sascha Feuchert received the 2022 COPERNICUS Prize in the field of Holocaust studies. Their joint research of literary testimonies from the Jewish Ghetto in Łódź (Ghetto Litzmannstadt) – the second largest in Poland under the Nazi occupation –significantly contributed to the reconstruction of the images of everyday life and Jewish culture in the ghetto. The jury especially commended the five-volume edition of the Ghetto Chronicle produced in cooperation with other colleagues and The Encyclopedia of the Ghetto.

These annotated editions are records that were written jointly by Jewish ghetto residents, serving both to document historical events such as deportations and to preserve Jewish cultural history. According to the jury, they are of fundamental importance for research into Jewish life in the ghetto and form an essential basis for exploring research questions that go far beyond literary studies. The jury was also particularly impressed by the translation of the main joint publications into no less than four languages (German, Polish, English, and Yiddish), along with the popularization work done by the two literary scholars which has a far-reaching impact on society at large.

Sascha Feuchert and Krystyna Radziszewska have been working together since the 1990s. Over the years, a wide-ranging international network of researchers from various disciplines has developed around the high-profile scholarly collaboration between the two award winners. Their universities have each established research centers of international reputation in the field of Holocaust studies. Feuchert and Radziszewska made their findings about Jewish life in the ghetto known to the general public in a German-language radio program and also used their work as a basis for developing teaching material for use in schools.

Winners of the COPERNICUS 2020 Prize

Prof. Sebastian Faust from the Technical University in Darmstadt and Prof. Stefan Dziembowski from the University of Warsaw received the COPERNICUS 2020 Polish-German Scientific Award for their excellent Polish-German cooperation in the field of cryptography and IT security. Their research often involves young researchers and focuses on the application of mathematical techniques to computer science. Their collaboration led to several important collaborative publications that received great interest from the academic community and had a significant impact on the systems used in practice. In particular, their work on the equivalence of the “noise leakage model” and the “random sampling model” won the Best Paper Award at the prestigious EUROCRYPT 2014 conference. The same paper significantly contributed to the general understanding of defense methods against “side-channel attacks.” These attacks are considered to be one of the greatest threats to practical security systems.

Another important area of their scientific cooperation concerns blockchain technology and cryptocurrencies. In particular, they proposed the “proofs of space” concept that offers a greener alternative to mining cryptocurrencies than the one used in bitcoin. This technology is currently implemented in commercial blockchain projects. Recently, Dziembowski and Faust created the “Perun” system that enables real-time blockchain applications. Besides publishing significant works on the subject, they are currently working on implementing the technology as an open-source project integrated with existing blockchain platforms.