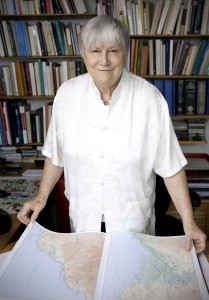 Prof. dr hab. Ewa Wipszycka (b. 1933 in Warsaw) is a historian of the Antiquity. Professor Emeritus at the Institute of Archaeology of the University of Warsaw. She studies Ancient Egypt during the Roman and Late Antiquity eras, as well as Ancient Christianity.
She graduated from the University of Warsaw (1955), also completing her PhD (1962) and habilitation (1972) there. She rose to the rank of professor in 1995. Between 1972-1990, she worked at a branch of the University of Warsaw in Białystok, where she was the Dean of the Faculty of the Humanities (1979-1981).
She is the author and co-author of numerous scientific publications, school and academic textbooks, and popular science books. She writes in Polish, Italian, French and English. She has participated in many research projects and archaeological digs in locations such as Marea near Alexandria, Naklu, and Ptolemais.

Editor of “The Journal of Juristic Papyrology” since 1989, and co-founder and editor of the monthly “Mówią wieki” since 1957. She has been the President of the Board of the Rafał Taubenschlag Foundation since 2002.

Prof. Ewa Wipszycka from the University of Warsaw received the FPS prize 2012 in the field of Humanities and Social Sciences for her wide-reaching reconstruction of the functioning of monastic communities in Egypt during the late antiquity.

Her award-winning monograph “Moines et communautés monastiques en Égypte, IVe–VIIIe siècles” (“Monks and monastic communities in Egypt, 4th-8th centuries”) provides a summary of three decades of her research into the spatial, communal and economic organisation of monasteries located on the Nile in the early days of Christianity. The work presents natural and cultural conditions of the communities, and the material circumstances of the monks’ everyday lives. The in-depth description of Egyptian monasteries arose as a result of historical research conducted by Prof. Wipszycka, as well as archaeological field studies and papyrology research. The award-winning monograph is a precisely constructed, interdisciplinary compendium of knowledge on monastic communities in Egypt and the monks who inhabited them. The elaborately illustrated work is a major contribution to our understanding of social and cultural processes taking part in the region towards the end of the Antiquity. It also allows us to study and understand the early days of Christianity and monastic life in Egypt, which was later continued in mediaeval orders in Western Europe and Byzantium.