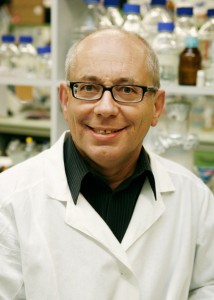 Prof. Jan Potempa – born in 1955 in Tarnow. A Biochemist and microbiologist. Leads research on bacteria causing periodontal diseases. Since 2005, he has been the head of the Institute of Microbiology of Biochemistry, Biophysics and Biotechnology Faculty at Jagiellonian University. Additionally, since 2009, he has been a professor at the Department of Oral Health and Rehabilitation at the University of Louisville Dental School (USA).

He received his Master’s degree in 1979 at the Jagiellonian University. It is also at this university that he received his PhD (1982) and postdoctoral (1993) degrees, i.e. habilitation. A professor since 1998.

He headed and continues to lead teams realizing research grants awarded by the American National Institute of Health (NIH), the Polish Ministry of Science and Higher Education as well as the European Union. He has, during his career, supervised 18 PhD candidates. Author of 278 publications and holder of 11 patents.

Member of the Polish Biochemical Society, International Association of Dental Research, International Proteolysis Society and the American Microbiology Society. Co-organizer of numerous scientific conferences – acting, among other posts, as the Chairperson at the Gordon Conference on Proteolytic Enzymes and Their Inhibitors in 2008. Member of the editorial councils of scientific magazines, including: “Biological Chemistry”, “Journal of Innate Immunity”, “Molecular and Oral Microbiology”, “The Open Biochemistry Journal” and “Current Protein and Peptide Science”.

Laureate of the Prime Minister’s Award for exceptional scientific achievements (2001) as well as of the 2004 MISTRZ (“MASTER”) and 2009 “TEAM” programs of the Foundation for Polish Science.

Professor Jan Potempa is awarded the Foundation for Polish Science Prize for having characterized a new family of bacterial proteinases and indicated their role in the development of periodontal diseases.

Inflammation of periodontal tissues – periodontitis – is one of the most common infectious diseases. The individuals affected by this disease are more susceptible to diseases of the circulatory system, rheumatoid arthritis, aspiration pneumonia or premature birth (the disease may also result in low body mass of a foetus). It is nowadays known that pathological changes in the parodontium are caused by a relatively small group of bacteria within the bacterial plaque below the gum line. Professor Potempa’s research concerns the role of bacteria named

Porphyromonas gingivalis in the formation and development of periodontitis. The laureate has, together with his co-workers, isolated and identified 7 protein-degrading enzymes produced by this bacteria – including the so-called gingipain.

He has proven that it is exactly the gingipain that are a key factor facilitating the development of parodontium inflammation, indicating, among others, their responsibility for hindering the organism’s autoimmune reactions, which instead of eliminating the bacteria turn against the body’s own tissues. This leads to a chronic inflammatory state of the parodontium and resulting in loss of alveolar bone and exposing necks of the teeth.

The discoveries made by professor Potempa have changed the fundamentals of thinking on the origin of inflammation of parodontium tissues. Their therapeutic potential is also held in high consideration, as the results of the research may lead to the creation of potentially more effective medications combating paradontosis, and thus – to the decrease in risk of cardiac and joints diseases.