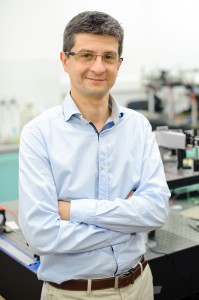 Prof. Maciej Wojtkowski (b. 1975 in Wrocław) is a physicist. He works at the Institute of Physics at the Nicolaus Copernicus University in Toruń, where he leads the Optical Biomedical Imaging Team. He works in optical applications in biology and medicine.
He has always had close ties with the Nicolaus Copernicus University, completing his Master’s degree (1999), PhD (2003) and habilitation (2010) there. He spent several years working abroad: between 1998-2001, he took part in a scientific exchange programme at the University of Vienna; between 2003-2005, he worked at the Massachusetts Institute of Technology (MIT); he also spent time at the University of Kent in Canterbury, and at the University of Western Australia in Perth (as a senior fellow).

He is the author of 112 scientific publications, including the book “Optical coherence tomography (OCT) imaging with Fourier detection”, forming the basis of his habilitation diploma; two chapters of books published abroad on the subject of OCT; 63 research papers published in prestigious journals; and 6 patents and 4 patent applications.

He has designed and built a tomography instrument for retinal imaging, providing a non-invasive and contact-free method of studying the inside of the eye. Between 2003-2006, three prototypes of the tomograph were tested at ophthalmology clinics in Boston, Pittsburgh and Bydgoszcz. Since 2005, he has been working with the Polish company OPTOPOL (taken over by Canon in 2009) on the industrial-scale manufacture of the tomograph, making it possible to use the instruments in everyday ophthalmology practice and clinical research around the globe.

He has been awarded numerous prizes for his scientific achievements, including a grant from the “Polityka” weekly (2001), the START grant (2003) and the POWROTY/HOMING subsidy (2006) from the Foundation for Polish Science, the European Young Investigators (EURYI) Award from the European Science Foundation (ESF, 2007), the Young Researcher’s Medal from the Warsaw University of Technology (2008), the Prime Minister’s Award for his habilitation degree (2010), and a grant as part of the FNP TEAM programme (2011).

Prof. Maciej Wojtkowski from the Nicolaus Copernicus University in Toruń received the FPS prize 2012 in the field of Mathematics, Physics and Engineering for developing and introducing Fourier domain optical coherence tomography into clinical ophthalmology.

Optical coherence tomography (OCT) uses light to reconstruct the 3D structure of tissue at a resolution of a few micrometres. It makes it possible to conduct pain free in vivo observations of the body’s structure and function. Prof. Wojtkowski has been developing the method since the earliest stages of his career, expanding its applications and diagnostic potential in ophthalmic practice.

His pioneering input into optical tomography involves using Fourier detection methods in spatial imaging of the eye. The key application of the new method is rapid, non-invasive observation of pathological changes to the retina, such as glaucoma, macular degeneration, macular holes, detached retina, and so on. It is a rapid improvement on the speed and resolution of analysis, bringing them to levels previously impossible to obtain under clinical conditions. Prof. Wojtkowski’s method (FD-OCT) has changed the research direction of contemporary ophthalmology, as well as having a great impact on the development of clinical methods and procedures, and – in turn – on patient comfort and the quality of data available to physicians around the globe. His research work is a rare example of theoretical and experimental work in physics, which has quickly found numerous practical applications and led to the development of new diagnostic instruments. Within a few years, the FD-OCT method has practically displaced former diagnostic technology of retinal disorders, and has become the standard in the production of medical equipment to the value of US$ 1 billion in the US and a further US$ 1 billion in other countries. OCT equipment based on this technology is manufactured in Zawiercie and used in clinics across Poland and sold around the world.

FD-OCT can also be used in studying cellular structures of other organs. Work is currently ongoing on the commercialisation of the technology in cardiology and endoscopic cancer diagnostics.