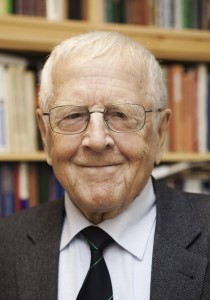 Prof. Mieczysław Mąkosza (b. 1934 in Cieszewla near Baranovichi, present-day Belarus) is an organic chemist. Retired professor from the Warsaw University of Technology and the Institute of Organic Chemistry of the Polish Academy of Sciences. He has gained worldwide recognition for his pioneering research with a fundamental significance for organic chemistry and wide-reaching practical applications in the chemical and pharmaceutical industries. Some of his greatest achievements include groundbreaking work in phase transfer catalysis, and subsequent research into nucleophilic aromatic substitution.

He graduated with distinction in chemistry from the University of Leningrad (present-day Saint Petersburg) in 1956. He has always had close ties with the Warsaw University of Technology, where he obtained his PhD (1963) and habilitation (1967). He rose to the rank of professor in 1984. He was the director of the Institute of Organic Chemistry of the Polish Academy of Sciences for 25 years (1979-2004). He successfully combined research work with numerous official functions at scientific institutions at the Polish Academy of Sciences: he was a member of the board of the Academy, president of the Committee of Chemistry, president of the scientific board of the Centre for Molecular and Macromolecular Studies, and member of the Central Committee for Degrees and Titles. He continues to be an active participant in the Academy’s structures as the president of the scientific board of the Institute of Organic Chemistry for the period 2011-2014.

Prof. Mąkosza has published over 300 research papers and 70 patents. He has also supervised over 200 Master’s degrees and close to 50 PhDs.

Prof. Mieczysław Mąkosza from the Institute for Organic Chemistry of the Polish Academy of Sciences received the FPS prize 2012 in the field of Chemical and Material Sciences fordiscovery and introduction of vicarious nucleophilic substitution into the canon of organic chemistry.

The reaction involves aromatic compounds, a large and significant group of chemical compounds with a great significance in our everyday lives (they are widely used in the pharmaceutical industry, agricultural products and electronics). Greatly simplified, the compounds have the basic shape of a honeycomb cell, comprising carbon and hydrogen, with a cloud of free electrons trapped within the hexagonal ring.

Nucleophilic aromatic substitution was first described in the mid-20th century, and has been used for various purposes in organic synthesis ever since. For many years, scientists believed that only chlorides and other nucleophilic groups underwent nucleophilic substitution. Prof. Mąkosza demonstrated that this view is incorrect, and showed that under certain conditions, the reaction can take place as substitution of a hydrogen atom, although the process occurs at a much faster rate than the better-known substitution of chloride. Prof. Mąkosza’s main achievement was the discovery and description of detailed features of vicarious nucleophilic substitution, such as orientation, range and limitations, as well as the more subtle details of its mechanism. This had a significant impact on the development of organic chemistry, both on the theoretical and practical levels.

Prof. Mąkosza’s method has become the accepted standard in organic synthesis, and remains in widespread use in the synthesis and production of numerous chemical compounds such as medicines, agricultural products, dyes, etc.