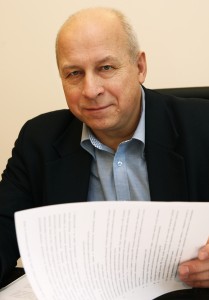 A graduate of law at University of Warsaw (1972) which is where he also defended his doctorate thesis (1978) and postdoctoral dissertation – habilitation (1988). Received title of professor in 2009.

Initiator and coordinator of the grant entitled “Modernization process of the Eastern European legal systems of the 19th century” (2002-2004) and Volkswagen Foundation grant “Legal culture of Eastern Europe” (2004-2006), realized at the Max Planck Institute in Frankfurt am Main. Five comprehensive publications summarizing the results of research resultant from these grants have already been published. First two volumes were edited by the laureate himself.

Member of the Committee on Antique Cultures’ Sciences at the Polish Academy of Sciences, “Polish Law & Economics Conference” Scientific Committee. He is also a member of the Programme Council for magazines: “UKSW Legal Journals” („Zeszyty Prawnicze UKSW”) and “Legal Forum” („Forum Prawnicze”) as well as the Russian magazine „Civilisticheskije issledovanja”. A juror of the annual scientific contest of the weekly magazine “Politics” (“Polityka”).

Professor Tomasz Giaro received the Prize of the Foundation for Polish Science for an interdisciplinary analysis of the category of truth in the doctrines of law from antiquity to the present – opening new prospects for understanding of the law as one of the foundations of European civilization;

The monograph entitled “Römische Rechtswahrheiten. Ein Gedankenexperiment” (2007), constituted a result of the laureate’s several years of studies and has been published by the renowned German publishing house as a comprehensive work in the scope of history and theory of law. Its subject is the criterion of truth as a tool of forming the legal norm. Arguments of truth (verum est) or falsehood (falsum est) were part of the discourse of jurisprudence from ancient Rome to the modern German doctrine. Made on a wider scale in the nineteenth century, however, the codifications shifted the burden of law-making from science to legislation. Because the legislator “commands but not discusses” a criterion of legal truth is in doubt. Prof. Giaro approaches this question in a framework of a broad analysis of ancient sources and later European legal tradition, using the method of thought experiment. Although an experiment interpreted literally is unacceptable in the legal sciences, the analysis of historical materials can answer the question whether an application of the truth criterion facilitates or impedes the legal discourse.

As part of discourse of the pre-codification era, the normative truth, composed of many value-formulating judgments constituted a “balancing” expression which permitted the complete acceptance of successful judgments of legal dogmatics. The application of an undifferentiated concept of truth has decreased however the precision of communication and which followed suit, the effectiveness of the legal dogmatics. The laureate indicates that the seeking of truth, as it is understood in empirical sciences, is futile in modern legal dogmatics. On the other hand, he notes that jurisprudence – as a science of a different cognitive status – would lose sense without the postulate of seeking the truth.