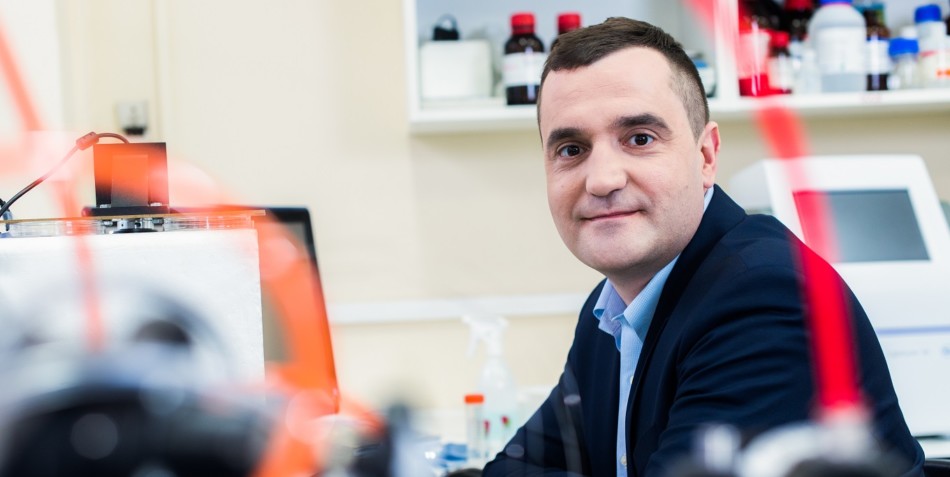 Co-founded by one of FNP’s laureates, prof. Piotr Garstecki, the company received a grant of EUR 1.9 million for further research on the innovative BacterOMIC system designed to support faster and cheaper diagnostics of bacterial infections, which is particularly important in difficult infections requiring hospital treatment. BacterOMIC was also listed as one of seven most disruptive diagnostic technologies in a competition organised by the American Association for Clinical Chemistry (AACC).

AACC is the world’s largest organisation bringing together clinical diagnostics specialists, and publisher of Clinical Chemistry, the leading scientific journal dealing with the subject-matter. The  solutions developed by Scope Fluidics, a Polish start-up co-founded by Prof. Piotr Garstecki, the company’s President of the Board, gained recognition in the Disruptive Technology Awards 2019 competition, and were showcased in the Innovation Zone during the AACC Expo held in California this August.

BacterOMIC is a response to one of the most pressing problems of today’s world – the decreasing efficacy of antibiotics, which is making once easily treatable diseases impossible to treat, since we are lacking the right ammunition to neutralise them. That is why the number of patients with tuberculosis is growing, and it is becoming increasingly difficult to treat wound infections, urinary tract infections, pneumonia, sepsis or otitis, which is common in children. According to the estimates of the World Health Organisation, within the coming 35 years antibiotic-resistant bacteria might lead to the death of even 300 million people, accounting for mortality rates higher than those associated with cancer diseases.

For that reason, it is a challenging task for physicians to choose the right antibiotic. They often need to test several dozen antibiotics in situations where every hour counts. Unfortunately, diagnostic systems which are currently in use are outdated and fail to meet contemporary needs. They provide incomplete information on a limited number of antibiotics, which is insufficient to choose an effective targeted therapy.

The BacterOMIC system, which has been developed by the team lead by Prof. Garstecki in Warsaw-based laboratories since 2016, can contribute to solving these problems. The system, which has been recognised recently as one of the most disruptive diagnostic technologies in the world, has also been appreciated by the experts of the European Innovation Council, who awarded Scope Fluidics with a grant of over EUR 1.9 million for the development of the system.

BacterOMIC is the first diagnostic system which will help physicians obtain comprehensive and accurate data on antibiotic resistance of bacteria infecting a specific patient in just several to a dozen hours. This will facilitate an effective treatment with the use of an antibiotic which has been accurately selected for this specific patient.

“The development of the BacterOMIC system was largely possible due to cooperation with the Foundation for Polish Science, which supported us with nearly PLN 3.7 million as part of the TEAM-TECH Programme, helping us expand our research team over a short time span,” said Prof. Garstecki. “The project is due to be completed soon, and we managed to achieve our initial targets, since we assumed that the project would support us in reaching the stage we are currently in. The EIC grant we have just received will support the production stage of our invention, so that it can be widely available in a few years’ time.”

Awarded by the European Commission, the prestigious EIC Accelerator grant (an SME Instrument) aims to support high-potential small and medium-sized enterprises and innovators to help them develop and bring to the market innovative products, services and business models that could drive economic growth.

“It has always been my dream to apply even a small share of our scientific research in practice,” said Prof. Garstecki. “We have an outstanding and ambitious team of highly qualified specialists, and we are also supported by foreign experts representing markets with the greatest experience. As regards BacterOMIC, tests have confirmed the possibility of analysing synergies between multiple antibiotic pairs with the use of automated testing, which distinguishes our system from competitive products,” stressed Garstecki.

“The BacterOMIC system was developed on the basis of the results of research carried out by Professor Garstecki’s team, whose efforts have been supported by the Foundation for Polish Science for years. It is an excellent example of an innovative technological solution originating from science. We are glad that, as an organisation financing the research, we were able to contribute to its success,” said Tomasz Perkowski, PhD, Deputy President of the Foundation for Polish Science.

The final certification and registration stage for the BacterOMIC system is due to be completed by mid-2021.