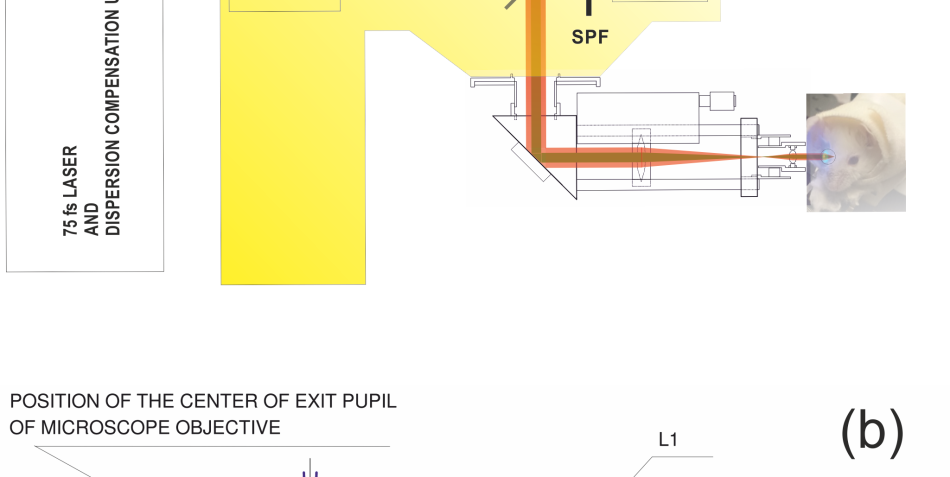 Researchers from Toruń, Poland, and Cleveland, Ohio, led by FNP Prize laureates Prof. Maciej Wojtkowski and Prof. Krzysztof Palczewski, have developed a revolutionary system for imaging of the retina of a living animal, where one of the optical elements used is the lens of the eye that is being examined. The innovative optical arrangement using two-photon fluorescence is described in an article published in the journal Biomedical Optic Express.

The concept of fluorescent microscopy is connected with the phenomenon of fluorescence and phosphorescence emitted after stimulation with light of a specific wavelength. This makes it possible not only to observe interesting test elements or living tissue, but also to trace natural reactions occurring in the tissue, for example processes leading to degeneration of optic tissue.

A technology that is well-suited to biomedical imaging of the retina is two-photon fluorescence. The basic rule is that substances excited by light emit rays with a wavelength shorter than that by which they were illuminated. But to obtain a sharp image using this technique, it is necessary to use a high concentration of stimulating rays. This means that the stimulating bundle must be focused using an optical arrangement that can collect light from various angles. A microscope objective with great light-gathering capacity is such an arrangement. But the price for obtaining good focusing of the stimulating bundle using a microscope objective is the limited distance between the objective and the focus of the bundle, which typically does not exceed 5 mm, which does not permit imaging of structures implanted in objects with irregular shapes. This is a major problem for example when attempting imaging of the retina of a living animal, where it is not possible to bring the optical instrument within a working distance from the layer of interest.

The solution is to use the optic arrangement of the eye as the last element of the imaging arrangement, i.e. substituting the lens of the eye being examined for the microscope objective. This was the idea hit upon by the researchers from teams led by 2012 Foundation for Polish Science Prize winners Prof. Maciej Wojtkowski from Nicolaus Copernicus University in Toruń and Prof. Krzysztof Palczewski from Case Western Reserve University in Cleveland. They developed an optic system in which one of the elements was the lens of a living mouse. This enabled them to obtain significant improvement in the quality of the images as compared to attempts using the classic arrangement with a microscope objective.