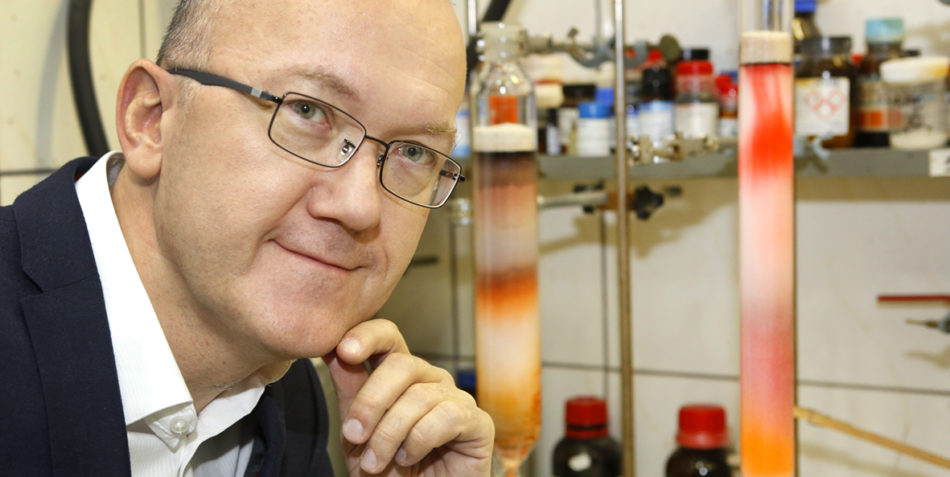 The high-ranking journal Andewandte Chemie has published the results of the research conducted by Polish scientists from the Institute of Organic Chemistry of the Polish Academy of Sciences, under the guidance of Prof. Daniel Gryko, winner of many FNP programs. It is one of the few publications written exclusively by Polish researchers to be published in this journal.

The publication entitled “An Efficient Method for the Programmed Synthesis of Multifunctional Diketopyrrolopyrroles” presents the results of research conducted exclusively in Poland, in a single research center. The article concerns the development of a completely new method of synthesizing diketopyrrolopyrroles, popular functional dyes. Diketopyrrolopyrroles are commonly used not only to dye expensive red cars (Ferrari, Toyota) or banknotes but also as an active material in research on solar cells, organic field-effect transistors, and “singlet fission.” The new synthetic method allows for the introduction of very large substituents and electron-rich fragments for the first time. This achievement has made it possible to control the photophysical properties of these compounds and, in particular, to shift their fluorescence in light spectrum from green to red. Gryko’s discovery enables the introduction of virtually any substituents into diketopyrrolopyrrole molecules, which was previously impossible. This – patented – discovery can be used in research on fluorescent imaging, organic photovoltaics, and organic luminescent diodes.

Prof. Daniel Gryko is the chairman of the Institute of Organic Chemistry of the Polish Academy of Sciences. His main scientific interests include the chemistry of functional dyes, particularly corroles, which are macrocyclic dyes with numerous applications. He is the winner of the MASTER/MISTRZ sabbatical fellowship program (2013) and recipient of two grants in the TEAM FNP program. In 2017, he was awarded the Foundation for Polish Science Prize, considered the most important Polish scientific distinction.