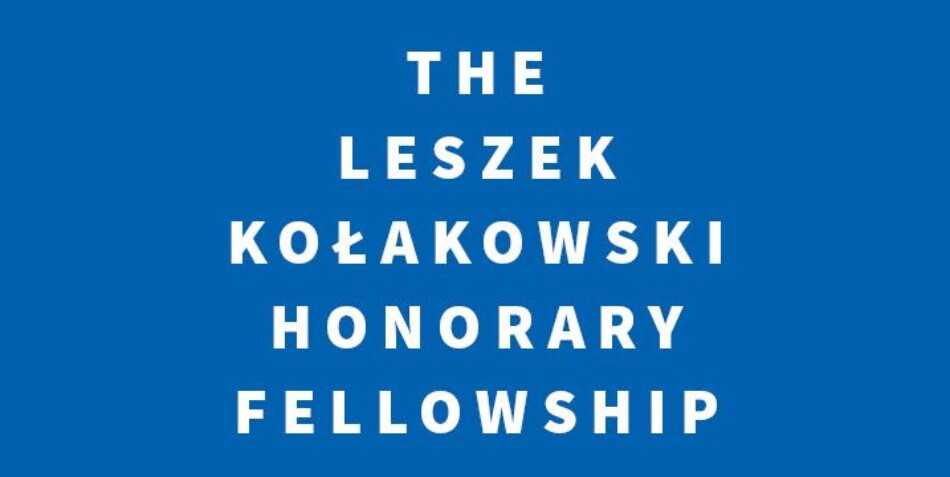 We kindly invite you to watch a video recording from the online ceremony of the third Leszek Kołakowski Honorary Fellowship awarded by the Foundation for Polish Science since 2016. This year’s winner is Dr. Julia Borcherding from the University of Cambridge.

Due to the ongoing pandemic, the ceremony was held online on March 11, 2021, on the Zoom platform. During the ceremony, Dr. Borcherding said: “First of all, thank you all so much for being here and thank you so much for your kind words and of course for awarding me this fellowship. It’s a really great honor and I’ll do my very best to live up to it. I am of course very sad, that I wasn’t able to travel to Poland for this, to meet all of you in person, but I’m hoping this might happen still in due time. And in the meantime, I’ll just be very happy about the upside of this, namely that there’s so very many lovely people from all over the world on Zoom here today, who can be here now because of Zoom, and also many without whose friendship and support I certainly would not be receiving this fellowship right now. Thank you very much for that too.” Next, Dr. Borcherding gave a lecture entitled “Fancies and Illusions: Two Women Philosophers on the Liberating Power of the Imagination,” which introduced the profiles and achievements of two prominent female philosophers: Margaret Cavendish and Émilie du Châtelet.

The laudation was delivered by Professor Catherine Wilson from the City University of New York, a member of the international chapter of the competition, who said during her speech: “Dr. Borcherding’s publication record is impressive. She has ignored the standard advice to turn a thesis into a book and to present oneself for decades afterwards as the world’s leading specialist on that topic and that topic alone. Instead, she has followed her interest without sacrificing depth. (…) Her range of reference, her nuanced and scholarly presentation in her essays, and her ability to distill an argument down to its essentials, won over our committee. The importance of her, still very new, early historiographic literature research topic – love in early modern philosophy – is unquestionable. (…) Dr. Borcherding has given a range of talks with some of the most intriguing titles I have come across and I am sure today’s will not disappoint. We, on the committee, are persuaded, she will go on to make a series of wonderful contributions to the field and we wish her all the best.”

Link to recording on YouTube: The ceremony of awarding the third Leszek Kołakowski Honorary Fellowship to Dr. Julia Borcherding (the entire film is available in English only).

Dr. Julia Borcherding specializes in early modern philosophy, with a particular interest in epistemology (theory of cognition), ethics, and morality and the points at which they intersect. She is renowned internationally as a leader in finding new approaches to seventeenth-century philosophy. Although she is only at the beginning of her academic career, she has published extensively and is already considered a leading interpreter of Leibniz’s philosophy, one of the most famous seventeenth-century philosophers. In addition, she engages in research on authors who – until recently – have been left on the margins of the history of philosophy of this period; especially, but not exclusively, female philosophers such as Anne Conway and Margaret Cavendish.

The Leszek Kolakowski Honorary Fellowship has been awarded on a biennial basis since 2016. The first winner in 2016 was Dr. Dmitri Levitin from the University of Oxford, while Dr. Caterina Tarlazzi (then of the University of Geneva) received the next fellowship in 2018. The competition for the fellowship is conducted by way of nomination: candidates for the competition are nominated by scholars from all over the world. The yearly fellowship may be awarded to a scholar from Poland or abroad. The winner is selected by a jury composed of philosophers and historians of ideas of international renown: Dr. Dmitri Levitin of the University of Oxford; Prof. Steven Nadler of the University of Wisconsin-Madison; Prof. Dominik Perler of Humboldt University in Berlin; Prof. Bogdan Szlachta of Jagiellonian University; Dr. Caterina Tarlazzi of Ca’Foscari University in Venice; and Prof. Catherine Wilson of the City University of New York. The scholarship amounts to PLN 100,000. Funding comes half from the resources of the Leszek Kołakowski Fund established for this purpose and half from the FNP’s own resources.