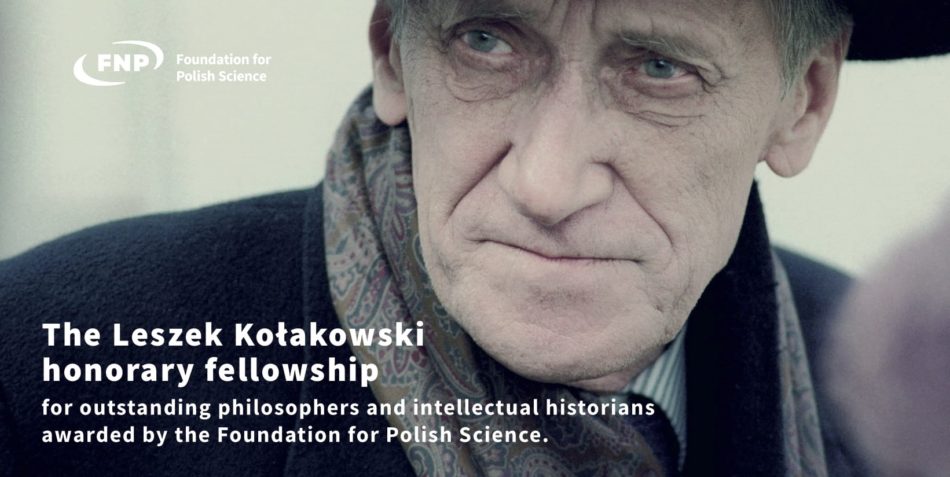 The Foundation for Polish Science (FNP) announces the third competition for Leszek Kołakowski Honorary Scholarship addressed to outstanding philosophers and historians of ideas.

The Scholarship seeks to distinguish scholars with a doctoral degree who, from the very beginning of their scientific career, show outstanding scientific achievements in the field of the history of ideas and medieval and modern philosophy until 1939. The yearly stipend may be awarded to a scholar from Poland or abroad.

“The Scholarship expresses the desire to honor the achievements of Professor Leszek Kołakowski, one of the most outstanding minds of the second half of the twentieth century, but also to promote Polish philosophical thought in the world,” says Professor Włodzimierz Bolecki, Deputy President of the FNP Board.

The competition regulations do not provide for self-nomination.

The competition is organized every two years. The first Scholarship winner was Dr. Dmitri Levitin, a historian of ideas and philosophy at the University of Oxford, author of publications on the history of modern European thought, including the history of philosophy, science, medicine, and relations between the state and the Church.

In the second edition of the competition, scholarship was awarded to Dr. Caterina Tarlazzi, a historian of medieval philosophy at the Ca’Foscari University of Venice, whose research interests focus on the problem of universals, with particular emphasis on the thoughts of Peter Abelard. In her scientific research, she combines an interest in logic and metaphysics with the search for sources of unpublished manuscripts and textual criticism.

The Scholarship grants up to PLN 100,000. The results of the 2020 competition will be announced this autumn.